More than 90 Tory MPs have second jobs, ranging from private healthcare to gambling. 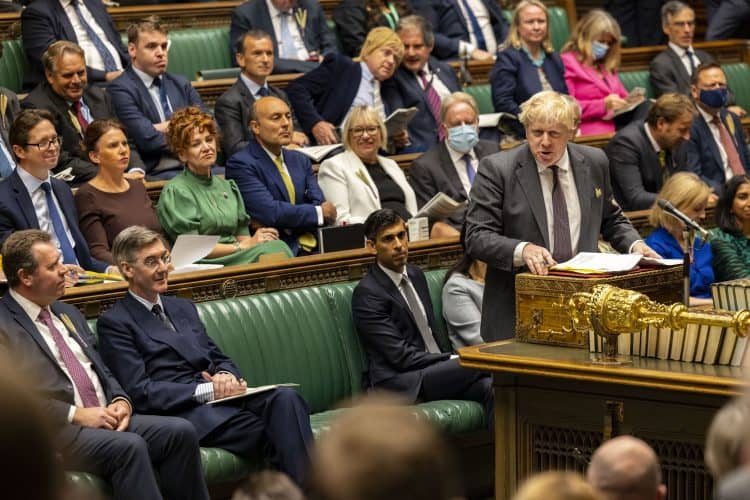 More than a quarter of Conservative MPs have second jobs, working for firms whose activists range from private healthcare to gambling – and earning more them more than £4 million in extra earnings a year.

Analysis of the register of MPs interests by The Guardian reveals that more than 90 out of 360 Tories have extra jobs on top of their parliamentary work – compared with three from Labour.

The MPs are overwhelmingly older and 86 per cent are men. The highest earners are all former cabinet ministers.

The prime minister is under increasing pressure after a minister admitted the government made a “mistake” by attempting to change standards rules to prevent a Tory MP from being suspended.

Boris Johnson skipped an emergency Commons debate on sleaze, leaving it to the Chancellor of the Duchy of Lancaster to respond as the prime minister chose to instead honour a “long-standing” commitment to visit a North East hospital.

Steve Barclay told MPs that, while there were concerns with the way allegations of wrongdoing by MPs are probed, it had been an error for ministers to proceed in the way they did last week as they sought to rip up the current rules.

But Barclay stopped short of embracing a ban on MPs holding second jobs, saying it could stop parliamentarians getting experience of the outside world.

Andrew Mitchell, the MP for Sutton Coldfield, is one of the highest-earning MPs – making £182,600 for 34.5 days’ work in a variety of financial advisory roles.

The former trade secretary Liam Fox has a £10,000 contract with WorldPR, a Panama-based PR firm, while Julian Smith – the former chief whip – is making around £144,000 a year from advisory roles with marine, renewables and hydrogen firms.

And it has emerged that Geoffrey Cox – the highest-earning MP since he was first elected in 2005 due to his work as a barrister and QC – has been voting in parliament remotely from a Caribbean tax haven, as he holds a second job advising the government of the British Virgin Islands.

Although ministers are not supposed to hold second jobs, Jacob Rees-Mogg has held on to a role as an unpaid partner in investment management firm Somerset Capital Management LLP.

Two Tories have jobs linked to the gambling industry. Laurence Robertson, the MP for Tewkesbury, receives £24,000 a year to work as a parliamentary adviser to the Betting and Gaming Council, while Philip Davies – the Shipley MP – is paid £16,660 by GVC Holdings – owner of Coral and Ladbrokes.

Leftwing Labour MP Richard Burgon, a former shadow justice secretary, is tabling a new private member’s bill to parliament that would ban all second jobs – with limited exceptions for professional MPs such as doctors or nurses.

Burgon said MPs should not be “lining their pockets by moonlighting in other roles – and it is especially outrageous that this was happening during a public health crisis”.

He told The Guardian: “The job of being an MP is not only a great privilege, but it is also well paid, and it should be the full focus of anyone lucky enough to be elected as an MP. If people want to seek lucrative roles elsewhere, then no one is stopping them, but they should step down as MPs to do so.

“My bill will put an end to this racket by banning MPs from having second jobs, except in limited exceptions, for example, where nurses need to work to maintain professional registrations or so a doctor can carry on serving our NHS.”