“It was one of the most painful things I’ve experienced.” 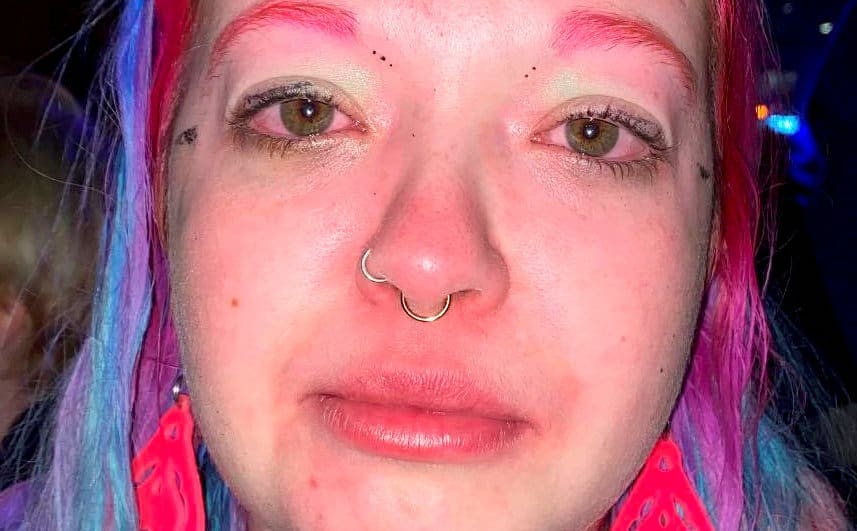 A student has described being pepper sprayed in the face by police during the ‘Kill the Bill’ protest in Bristol on Sunday.

Cydanie Smith says she was sprayed by officers after she refused to move from the pavement outside Bristol’s Bridewell Police Station.

The 20-year-old said the spray was deployed much closer than then legal required a one-metre distance.

Cydanie, who was left momentarily blind and in agonising pain, says she had felt ill ever since.

She says having inhaled the spray’s toxins has given her “bad chest pains.”

“It was one of the most painful things I’ve experienced,” she said.

“It’s like liquid chilli juice being sprayed into your eyes. It’s like having chemicals fired on you and I inhaled a lot of it.

“The only thing going through my head was ‘oh my god I’m never going to see again.’

“If we don’t stand up now what are we going to do – we’re not going to have a chance to say no, this isn’t China or North Korea – we should be allowed to stand up and say ‘no we don’t want this.’”

Missiles were thrown and police vehicles were set on fire at the ‘Kill the Bill’ march on Sunday, following which Avon and Somerset Police said the investigation would be “one of the largest” in its history.

A spokesman yesterday said the force is now investigating assaults on 40 officers and one member of the media. Nine people have been arrested so far – but the police have warned this number will almost certainly rise.

University of West England student Cydanie attended the protest from early on, arriving at College Green at 2.30pm with a friend.

Cydanie, who is studying Illustration, had a placard that read: ‘It is a human right to protest.’

She followed the protest when it marched around the city centre and eventually arrived outside Bridewell Police Station.

She said as the events descended, she found herself caught in the middle of a crowd shouting at police officers who were enforcing Covid-19 restrictions and tackling rioters.

Cydanie and her friends soon decided to sit down on a pavement near the station to rest after a long day of walking – but soon became engaged in a confrontation with riot police.

“People were jumping on cars and doing horrible things that I don’t condone at all,” she said.

“I tried to have a conversation with the police – then they were like: ‘If you don’t move, you’re gunna get pepper sprayed.’

“I said ‘why are you trying to threaten us? Your job is to protect us and now all of a sudden, your threatening us with pepper spray.’

“One had ‘medic’ written across her shield – it was like a print. That is a picture of hypocrisy.”

Cydanie was soon sprayed in one of her eyes by an officer. Still able to see, though, she then reached her arm out to shield her friends, but says they were all soon bundled to the floor.

“We were in a pile of four or five people completely on the ground – on the other side of us we had a police van trying to drive into us and you can’t move,” she said.

Moments later though, Cydanie says a can was emptied directly into her face, rendering her blind for 20 minutes and in agonising pain.

“The last thing I saw was a can come right in front of my eyes – it was sprayed all over my nose and my mouth,” she said.

“I’m still experiencing issues; my chest has been extremely painful.

“Then someone luckily grabbed my arms and took me to the side where people had cartons of milk ready.

“It was at least 20 minutes until I started seeing again, I was covered in milk – it was all over me.”

Cydanie says she is yet to make a complaint to Avon and Somerset Police – but feels the treatment of her and others that day was out of order.

She said: “I looked up police documents and when you can use pepper spray – and you should only use it when someone is getting violent or aggressive – and you’re supposed to be a minimum metre away.

“I need to get in touch with someone to try help because I don’t know how to go about it as I don’t really know how to make a complaint.

“I feel they picked on people who seemed weaker – the people they were shoving with shields, the majority were young women like me who really are pretty defenceless against them.

“They come in with weapons and people are going to feel intimidated.

“The whole thing was completely peaceful and really a lovely experience until riot police came in and started intimidating people. That’s really when violence kicked off.

“It is unfortunate that protests put people at risk – but we have to make a difficult decision. I have to stand up for my rights and for the many people around me.”