Japan’s new volcanic islands provide scientists with an opportunity to study new life colonising untouched land By Dr. Robin George Andrews, TLE Science Editor  Have you ever heard of an island called Atarashii Shima, off the coast of Japan? I’m betting you haven’t, but to be fair, before November 2013, neither had anyone on the planet. […] 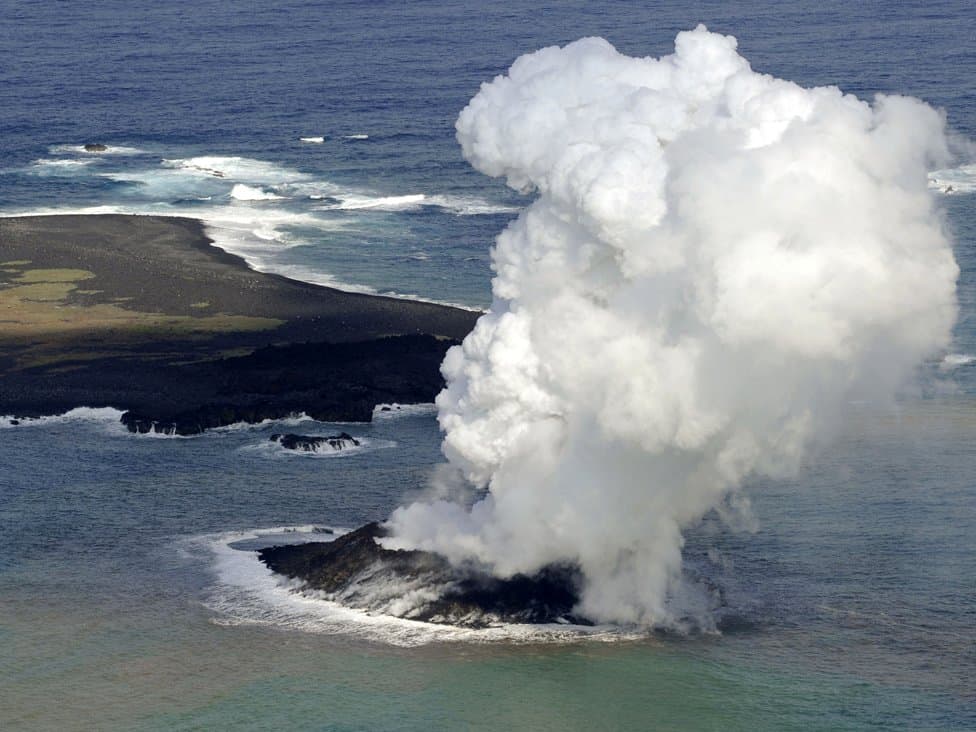 Have you ever heard of an island called Atarashii Shima, off the coast of Japan? I’m betting you haven’t, but to be fair, before November 2013, neither had anyone on the planet.

This little island, not given an official name but which the Japanese media christened “new island”, formed close to Nishinoshima (meaning “western island”), a small volcano emerging from the Pacific Ocean. Not before long, the island rose enough above the waters to merge with its big sister, forming one united landmass a little more than a kilometre across. Continuing volcanic eruptions have propelled the joined islands to a height of 110m above sea level, and as of the end of 2014, the island had an area of 2.3 square kilometres.

The volcanic eruption is on-going at the time of writing, spewing more molten rock onto the fresh terrain, constantly increasing its size. If the eruption continues apace for a significant amount of time, the waves will not be able to consume it, and it will stand above the ocean, ready to set foot on. Even the rising sea levels caused by the mischief of mankind cannot – for now – overtake the prolonged volcanic birth and evolution of this tiny castle in the sea.

Both Nishinoshima and Atarashii Shima are proving to be so-called “natural laboratories” for both volcanologists and biologists alike. A strange academic pairing, you may think – what have the fire-bringing mountains got to do with harbouring biological life?

Well, collaborations between the two fields of science have led to the now prevailing view that life on Earth began alongside deep-sea volcanic vents; life that lived not off sunlight or food, but in actual fact utilised chemicals and electric currents – in fact, these primitive creatures are still around today using this process of chemosynthesis.

In particular, Nishinoshima – although currently just an exposure of molten and cooling lava, is hypothesized to be an ideal location for new primitive ecosystems – and perhaps more advanced ones – to be developed. Why? Well, a combination of the fertility of volcanic land, the heat source it provides, and somewhat bizarrely, the presence of feathers, corpses and sea bird droppings is, would you believe it, a perfect recipe for the start of life.

Volcanic land is traditionally fertile. Apart from perhaps ancient religious reasons, have you ever wondered why so many people tend to start living on the sides or in the shadow of demonstrably dangerous volcanoes? The cooled, crumbly, volcanic soil often provides a host of geochemistries to a range of floral life forms: Mount Etna, a historically and recently destructive example of both effusive and explosive volcanism, is surrounded by olive groves. Forests stretch for miles and miles around the base of the much-revered Mount Fuji.

With the addition of birds flocking to the new landmass, dropping their own personal waste and half-eaten fish corpses as they go, additional organic material is added to the island, complete with their accompanying bacteria. In a warm environment, with additional organic material, both bacteria and plants are being given an isolated opportunity to grow and evolve in front of scientist’s eyes. So whilst the volcanologists will be gazing at the ever-growing summit, biologists will be treading carefully on the island, scooping up a few samples every now and then, and watching life naturally take its course with almost no human interference.

It’s unlikely. They could produce enough lava that their land area increases so dramatically that a large enough island forms, and terrestrial life begins to colonise it. However, it’s more likely that they will follow the story of many volcanic islets across the world’s oceans and slowly evolve into an atoll.

Darwin first visited an atoll on his Beagle voyage in 1842; he reasoned, correctly, that these staggeringly beautiful rings of coral – containing a lagoon in the centre somewhat protected from the salty sea surrounding it – were formed by a combination of volcanism and opportunistic biological life. A highly effusive volcanic eruption occurs in the middle of the ocean and builds up a nascent island over a very short period of time; coral then begins to grow along the rim of the volcano along the shoreline. Eventually, the volcano ceases to erupt, and over a long period of time, the volcano collapses into the sea whilst leaving a ring of coral around it, forming an atoll.

These atolls, however, don’t just host coral reefs. Coral reefs are the gardens of the sea: they encourage the colonisation and occupation of the area they inhabit by vast swathes of marine life. So, one day, these new baby volcanoes will become extinct: but in their wake, they will leave a cornucopia of life.

As Darwin remarked upon observing the life-hosting coral reefs of the Pacific all those years ago, “The tree of life should perhaps be called the coral of life”. Scientists like myself are lucky enough to see one of these life-hosting natural laboratories from their birth. Darwin would have loved it.