Finland's president and prime minister said the nation must apply for Nato membership without delay. 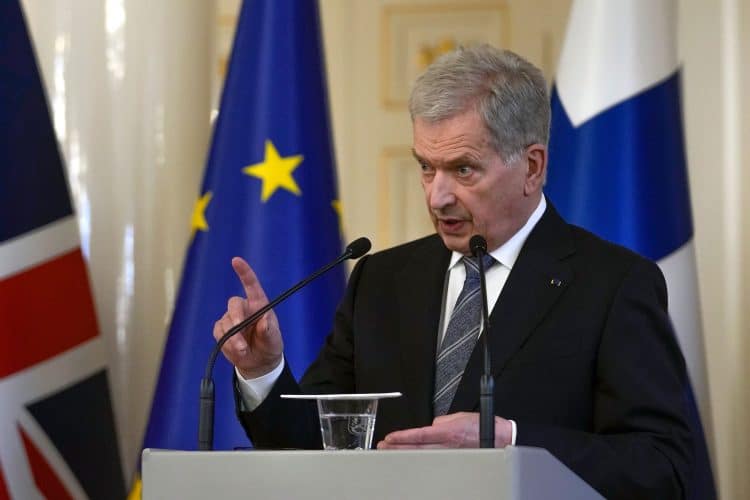 Finland’s leader is expected to publicly say for the first time that his country wants to join Nato, after the Nordic country and Sweden signed security pacts with the UK.

As his comments were broadcast around the world #welcometoNato began to trend on Twitter.

The BBC said the anticipated announcement – the first step towards joining the military alliance – from Finnish president Sauli Niinisto was prompted by a significant rise in public support for Nato membership following Russia’s invasion of Ukraine.

Asked during a press conference in Helsinki alongside Mr Niinisto if there would be “British boots on the ground” on Finnish territory during a “possible conflict with Russia”, he said: “I think the solemn declaration is itself clear.

“But the nature of that assistance will of course depend upon the request of the other party.

“But it’s also intended to be the foundation of an intensification of our security and our defence relationship in other ways as well.”

Meeting with Swedish prime minister Magdalena Andersson earlier in the day, Mr Johnson said the UK “will not hesitate” to act in the event of an attack on the country.

The British Prime Minister said it was “a sad irony” that the security assurance declaration was signed days after marking VE Day, but was more important than ever under the “grim circumstances” following Russia’s invasion of Ukraine in February.

Both European countries have been considering the prospect of Nato membership in the face of Mr Putin’s ongoing military aggression.

Speaking after signing the pact, Mr Niinisto said he did not view joining the military alliance as a “zero sum game”.

“Joining Nato would not be against anybody,” the Finnish president said.

Here are some of the comments as the phrase began to trend on Twitter: