"There are the naysayers and the doom-mongers who claim that we are Little Britain – too slow, too weak, too inexperienced." 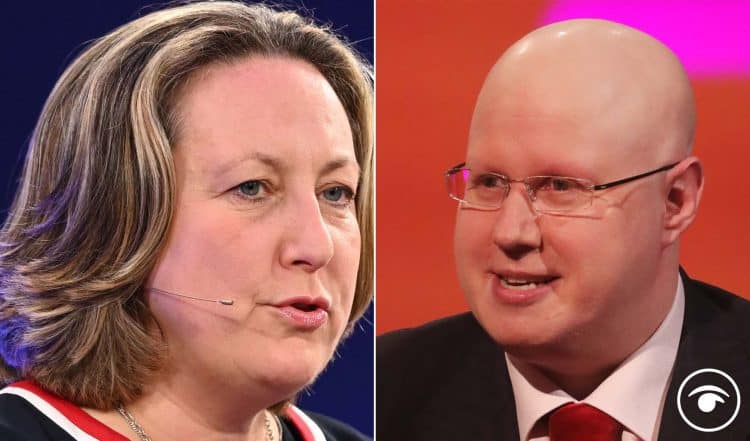 The International Trade Secretary has defended the UK’s trade strategy against “naysayers” and “doom-mongers”, arguing “we are not Little Britain and we never were”.

It comes as Boris Johnson stumbled through a major speech in which he lost his place in his notes, talked about a day trip to a Peppa Pig theme park and imitated a car, before insisting: “I thought it went over well.”

The Prime Minister’s keynote address to business leaders saw him struggle with his papers, at one point muttering “blast it” before  shuffling sheets and begging the audience to “forgive me” as he tried to find the right point to resume.

The speech to the Confederation of British Industry was an attempt to set out how pursuing green policies could help in the “moral mission” to “level up” the UK.

Speaking at the Margaret Thatcher Conference on Trade, Anne-Marie Trevelyan said the country could now “write a new chapter” in its “proud trading history” as it is no longer “waiting on the EU’s ‘computer says no’ bureaucracy”.

Concluding her speech at the Centre for Policy Studies (CPS) event, she said: “I hope this gives you a brief outline of the UK’s ambitious vision for trade.

“Some critics have questioned whether we have the strategy to get there and if there should be some weighty tome, I don’t know, sat unaltered on a dusty shelf somewhere.

“I’m afraid I fundamentally reject that approach. Because our strategy is clear, dynamic and built on really strong foundations.

“It’s based on the principle of free, fair, rules-based international trade, the flexibility and dynamism afforded by our newfound status as an independent trading nation, and reaching out to seize the opportunities of a shifting centre of gravity in the global economy.

“Opportunities we are uniquely well-placed to grasp.”

The minister added: “It is a strategy not looking just at the next headline, the next quarter, or the next year, but realising there’s opportunities ahead in the decades to come.

“It will make exporting easier for businesses … and bring prosperity to every region and nation of our country.

“Now, just as in Mrs Thatcher’s time, there are the naysayers and the doom-mongers who claim that we are Little Britain – too slow, too weak, too inexperienced.

“But, and with the greatest respect to Matt Lucas, we are not Little Britain and we never were. We are global Britain.”

Looking ahead to post-Brexit trading arrangements, Ms Trevelyan said: “For the first time in almost 50 years, we are no longer waiting on the EU’s ‘computer says no’ bureaucracy, where trade talks drag on and on.”

She added: “We are an independent trading nation, able to reach out on our own, securing great deals and empowering businesses to seize those opportunities of the future and create high-paying, highly skilled jobs, and to forge an open, enterprising economy which enables us to build back better from the pandemic, levelling up the whole of the UK.

“With the energy, the innovation and the engagement of businesses, communities and this ambitious strategy, we will unleash our nation’s brilliant potential and write a new chapter in our proud trading history.”

Ms Trevelyan also reiterated the Government’s focus on trading in the Indo-Pacific region.

“Between 2019 and 2050, more than half of global growth is expected to come from the Indo-Pacific.

“Within that, South Asia will grow particularly quickly and India is projected to be the world’s third largest economy by 2050.

“India is of course one of our most significant export markets and I look forward to launching our trade talks soon with them. And the global economy is also becoming more services-orientated, as rising incomes in emerging markets shift those spending patterns.

“There could be almost two billion more middle class consumers on the planet by 2050.

“And around three-quarters of these increases will be in the Indo-Pacific region. And these are trends we therefore cannot afford to ignore.

“So a long-term vision for trade means adapting to this changing reality and reaching out to seize opportunities in the emerging high-value markets where demand for our world-class goods and services is high.

“This means focusing our efforts on those parts of the world that can supercharge UK trade in the industries of the future like digital services and tech, not retrenching and retreating into protectionism, but reaching out to trade with the world’s fastest-growing markets, whilst ensuring that Britain’s status as a global exporter, centre for foreign investment and champion of international trade remains firm.”

Meanwhile, Downing Street has rejected a suggestion from Ms Trevelyan that Article 16 would not be triggered before Christmas.

The Prime Minister’s official spokesman insisted there was no timetable over the potential use of the power, which would suspend parts of the Northern Ireland Protocol and risk a major escalation in tensions with the EU.

“Our preference remains to agree a negotiated solution if we can,” the spokesman said.

“Of course, we will use Article 16, the safety mechanism, if solutions can’t be found.”

Asked whether the UK would be willing to use it before Christmas, the spokesman added: “I’m not going to put a timetable on it. We continue to believe that the conditions for triggering that safety mechanism of Article 16 have been met, that remains the Government position but we will continue to look for a consensual negotiated solution.”

In a Daily Telegraph interview, the International Trade Secretary said: “I don’t think anyone’s calling Article 16 before Christmas, absolutely not.”