"The Chinese will just says ‘we can’t take this guy seriously’," the PM was told. 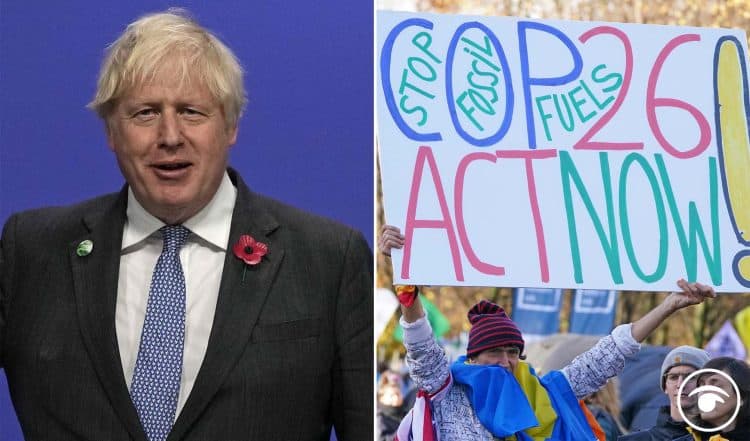 Boris Johnson has warned world leaders that the longer they fail to tackle climate, the higher the cost when they are forced “by catastrophe” to act.

However, he has been called ‘weaselly’ for dodging a question about the UK’s coal strategy.

Addressing world leaders including US President Joe Biden, India’s Narendra Modi and German chancellor Angela Merkel, Mr Johnson said the world was in roughly the same position as James Bond as he tries to deactivate a doomsday advice in his films.

But he said: “The tragedy is this is not a movie and the doomsday device is real.

“The clock is ticking to the furious rhythm of hundreds of billions of pistons and furnaces and engines with which we are pumping carbon into the air faster and faster… and quilting the earth in an invisible and suffocating blanket of CO2, raising the temperature of the planet with a speed and abruptness that is entirely man made.”

He warned of the dangers of rising temperatures, jeopardising food supplies for hundreds of millions of people, more wildfires and eventually the loss of whole cities such as Miami, Alexandria and Shanghai.

“The longer we fail to act and the worse it gets and the higher the price when we are forced by catastrophe to act,” he said.

Well as he lectures other world leaders the PM came under questioning over his own climate issues.

BBC’s climate editor Justin Rowlatt said to the PM: “You’re going to the developing world and saying phase out coal, at the same time as not ruling out a new coal mine in Britain.

“We started the industrial revolution – we should close the mines.

“Why don’t you just say we’re just not going to open this coal mine?

“The Chinese will just says ‘we can’t take this guy seriously’.”

The prime minister replied by claiming 80% of UK power came from coal when he was a child; now it’s just 1%.

“What everybody says is incontrovertible is the progress the UK has already made,” Johnson added.

Rowlatt then said: “I’m sorry to bang on about coal, but it makes you look a little bit weaselly not answering the coal question.”

The journalist continued to try and get an answer from the PM if he will allow more coal mines in UK.