Lest we forget that this government voted to allow human faeces to land on our beaches. The first unwanted invasion of our shores since 1066. 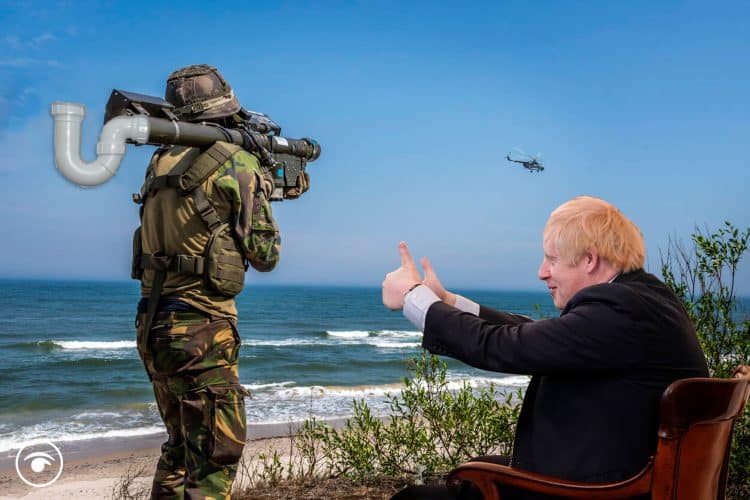 The Labour leader was struck down with Covid just before today’s PMQs, so Ed Miliband stepped in with the sort of performance you wished he had pulled off when he was actually Labour leader.

The prime minister was asked about the huge increase in Covid rates. With the Labour leader missing, and front bench colleagues frantically getting tests as the session began, it seemed brazen (even for this government) to say we have the virus under control.

The Tories had a few more masks on than normal, ironically face masks had just become mandatory in the commons for everyone… except MPs.

The main issue of the day was Cop26, however, what wasn’t mentioned was the government voting to let sewage gush into the sea, which after a huge public outcry they made a partial U-turn.

It is worth noting embarrassing climbdown doesn’t come even remotely close to dealing with the sewage crisis. Lest we forget that this government voted to allow human faeces to land on our beaches. The first unwanted invasion of our shores since 1066.

Pissed up against the wall

So are these the people who are really going to save the planet? They don’t even want to fix our Victorian drainage system.

They had £37 billion to spend on test and trace, which a government report basically concluded was pissed up against the wall by pissed up £1,000 a day private consultants.

There was no time for pork-barrel politics or eating bacon sandwiches, mainly as we don’t have any abattoir workers, so Ed continued to press the PM over COP26.

Johnson bit back and said that the government has virtually cut CO2 in half, which is simply not true.

Satire aside, one thing the PM did say he would bring up during the Cop26 was to push for an international cheese toasty day. I will let that line fester like a lump of cheddar in the midday sun.

Labour’s Zara Sultana asked about donations of the Tories from fossil fuel companies and climate deniers, would the PM pay it back?

Of course not, he said all Tory donations are registered in the normal way… over a glass Sancerre at the Carlton Club.

To end PMQs Martin Vickers told the house it was national wind week, asking if the prime minister is supporting renewables in the UK?

His answer, like our waterways, wasn’t full of just hot air today…

The budget was up next, with questions over what Sunak can offer that can make up for the economic affluence of Brexit seeping into our lives?

He had leaked most of the budget like a sewage outflow onto a (once) blue flagged beach, which had annoyed the speaker. He began by apologising for it.

Washed up dead fishy on the dishy Rishi heralded a new age of optimism, but the Telegraph reported that sewage will be diverted onto our roads if we don’t let it flow into rivers and the sea. I guess it would shift the Insulate protestors, some climate-denying Tories might be thinking.

Sunak said that “only the Conservatives can be trusted with taxpayers money”, seemingly ignoring the unimaginable £37 billion wasted on the test and trace system.

One major announcement was a creation of a network of “family hubs,” a sticking plaster for a fractured childcare and children services landscape, a pound shop Sure Start replacement to replace all centres they closed.

Overall he promised a £150,000,000,000 spending frenzy in his Budget statement. The management consultants will be rubbing their hands in glee as we rub the toxic waste out of the palms of our hands.

But the biggest cheer from the Tory benches was for red flags to return to the UK fishing fleet.

This is what really matters to them, levelling up or helping the poor is not what they really anchor their beliefs. The least well off will be left up the creek, river, canal, sea without a paddle.

Famously Andy Dufresne crawled through a river of shit and came out clean on the other side.

But this isn’t a movie and there won’t any redemption for this cesspit of a Government.