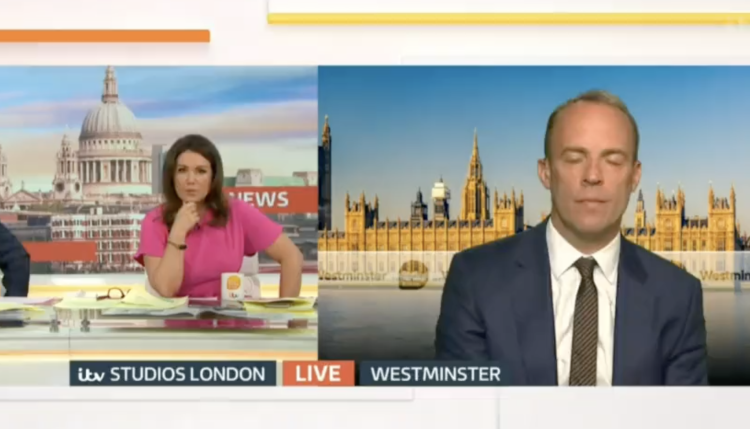 GMB’s Susanna Reid was on fire this morning as she demanded to know how Chris Pincher became Deputy Cheif Whip, even though a lot of people in government seemingly knew about his behaviour.

Boris Johnson was briefed “in person” about an investigation into the conduct of Chris Pincher when he was a Foreign Office minister, the former permanent secretary at the Foreign Office has said.

Sadly, for Dominic Raab, he was facing the questions this morning.

Reid asked him how someone “found guilty of inappropriate behaviour” was allowed to become Deputy Chief Whip.

He replied: “You say found guilty, but no formal disciplinary action was taken.”

Raab continued with this line to defend the government: “Sorry Susanna, you’re wrong about what happened and it’s important to clarify.”

“It’s absolutely true that an investigation took place; I was clear the er, ermmm substance to these claims and what had happened.”

Undeterred, Susanna said: “I’m not sure what we’re arguing about here Mr Raab. The investigation…”

Rabb then jumped in to say: “You’re using the word ‘guilty’ and that’s simply wrong.”

Susanna then asked: “So what does an investigation upheld the complaint of inappropriate behaviour for which Mr Pincher then apologised mean?”

Raab continued to try and correct Susanna for using the word guilty as, losing patience, she questioned: “Well was he guilty of inappropriate behaviour or not?!”

Raab conceded “the claim was found to be substantiated,” to which Susanna replied: “So he was guilty of inappropriate behaviour,” only to be told by the politician that “guilty is a very loaded term.”