“There were times when I didn’t even have a yacht to p**s in," jokes the comedian in his parody video about the wealth inequality row. 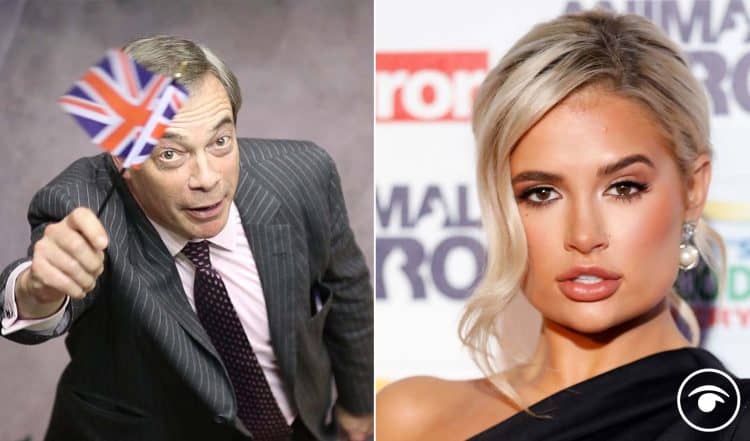 There has been quite an uproar over comments made by ‘influencer’ and PrettyLittleThing ambassador Molly-Mae Hague regarding wealth inequality.

Hague said: “When I’ve spoken about that in the past I have been slammed a little bit, with people saying ‘it’s easy for you to say that because you’ve not grown up in poverty, so for you to sit there and say we all have the same 24 hours in a day is not correct.’ But, technically, what I’m saying is correct. We do.”

She went on: “So I understand that we all have different backgrounds and we’re all raised in different ways and we do have different financial situations, but I do think if you want something enough, you can achieve it.”

After a short clip from the interview went viral, she was described by some on the social media platform as “tone deaf” and “Thatcherite”.

Here she is moaning about a 12 hour shift…

Someone also got to her Wikipedia…

Novak Djokovic fan Nigel Farage took time out of his bid to ‘free’ the tennis star and congratulated the 22-year-old saying she “has done well”.

In a video posted to Thrillz, a platform where people can buy personalised messages from people in the public eye, he said: “Her comment that we all have the same 24 hours every day, what’s she saying?

“She’s saying that any of us – if we work hard, have a bit of luck, and have got ability, regardless of our backgrounds, regardless of who we are – can go out there in the world and succeed.

“It’s all about having dreams, having ambitions. Yeah sure, not everyone can make it. But for goodness sake, in criticising Molly-Mae you’re taking away people’s dreams. Don’t do that.”

Farage ends the video saying: “Molly-Mae is on the right track”.

Well, it was too good an opportunity not to miss and comedian Munya Chawawa rarely does.

So he filmed a new parody video about the row.

He plays a character called ‘Olly Mae’ who is a fan of Hague and goes on to explain how her words have inspired him.

“There were times when I didn’t even have a yacht to p**s in,” says the character before adding that the only two things that kept him going were his “immensely privileged background” and a ‘book’ called ‘Molly Maeditations: Daily Quotes to Stop You Being Poor.’

Needless to say, the video has gone down a storm on socials.