We've got a real life Spiderman on our hands, here! Free-climber Adam Lockwood made it to the top of The Shard on Sunday morning. 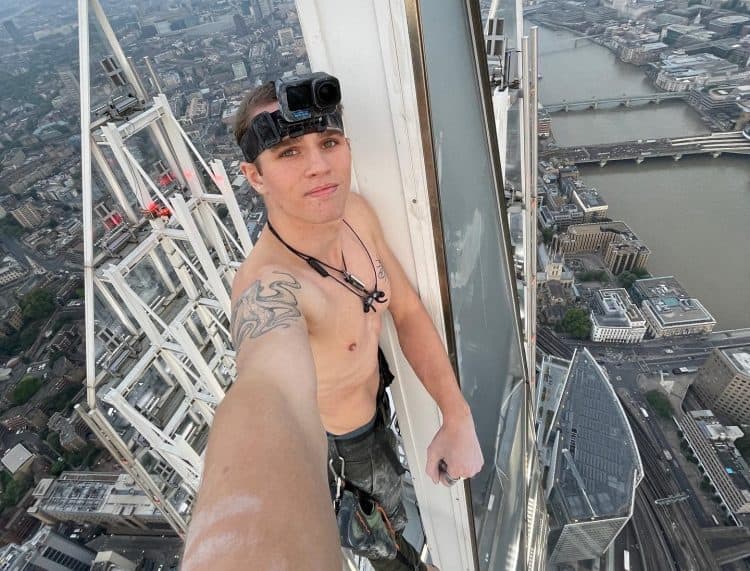 Sufferers of vertigo, look away now. A free climber has scaled The Shard in London, after completing the ascent early on Sunday morning. Thrill-seeker Adam Lockwood made it to the top of the structure – but his freedom was short-lived.

Who has just climbed The Shard?

The 21-year-old was arrested once he was back on terra firma. Nonetheless, his work was done. Along with his Go-Pro and selfie stick, Lockwood took a dizzying snap of himself hanging off the very top of the 1,000ft structure.

People on the ground were able to catch the free-climbing adrenaline junkie on their phones. One video caught Lockwood just before he completed his mission. Meanwhile, some people inside The Shard WAVED at him as he passed their floor.

Our super-scaler has previously made it to the top of Canary Wharf before, and even took his climbing exploits to Benidorm and Dubai. He’s no stranger to tangling with the law – and more trouble awaits him now.

It’s understood that Lockwood will now be charged with trespassing and causing a public nuisance. The early morning climb has gone viral online, and the death-defying climb has already made international headlines.

A spokesperson for the Met Police has confirmed a number of details about the incident. Both ambulances and fire engines were called to the scene, and an area outside The Shard was cordoned off. Two others have been arrested alongside Adam Lockwood, too.

“Officers were called at 5:38 on Sunday 4 September, following reports of a climber on The Shard. Officers, London Ambulance Service and London Fire Brigade all attended. A number of cordons were in place while emergency services responded.”