One IB protestor said: “If going to prison and losing my home is what it takes to get the Government to do the right thing and cut our carbon emissions then it’s a price worth paying." 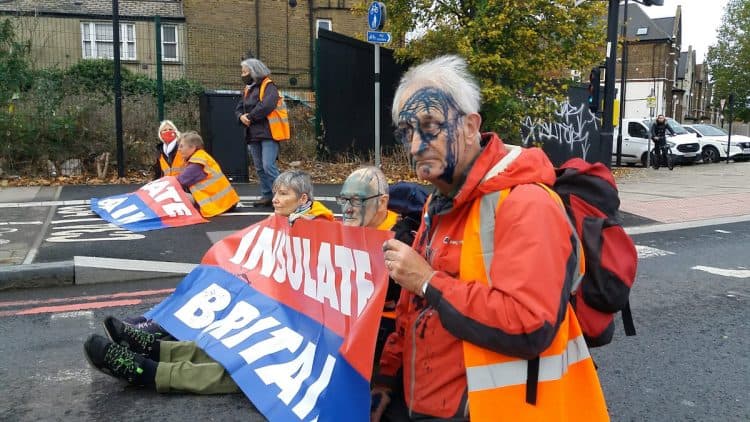 Insulate Britain has attempted to block two major roads into London after warning its “non-violent civil resistance” would continue on Wednesday.

The climate group targeted the A40 in west London and a roundabout in Dartford, Kent, urging the Government to better insulate homes.

Protesters began blocking traffic on the A-road junction with Gypsy Lane early on Wednesday morning, but in Dartford, Kent Police officers intervened before the protest began.

Officers escorted six activists away from the roundabout towards police vans in a nearby car park.

The Metropolitan Police force have been diverting traffic at the A40 site.

The activist were seen with blue on their clothes and faces as they started blocking the A40 and M25.

A Metropolitan Police spokesman said: ”The Met is aware of Insulate Britain activists blocking the road at the A40 junction with Gypsy Lane in North Acton.

”Officers were promptly on the scene. Traffic has had to be diverted for the safety of all. We’ll share updates soon.”

The protests follow Insulate Britain’s warning to the public not use the M25 this morning that they issued yesterday, while also asking the public to reduce their speed on the vital road to 20mph.

Using a strategy of gluing themselves to the road on their hands, faces and feet, the activists aim to become more difficult to remove in fresh protests.

One activist said she was prepared to lose her home and go to jail for the cause.

Suzie, 47, from Cambridge, who works in childcare, said: “If going to prison and losing my home is what it takes to get the Government to do the right thing and cut our carbon emissions then it’s a price worth paying.

“I can’t be a bystander while this Government betrays the public, our children and future generations by failing to defend our country from the climate crisis.

“Insulating Britain’s leaky homes has to come first. It will cut out a huge chunk of our carbon emissions, help families struggling with their energy bills and end fuel poverty.

“It’s such a basic first step that you have to wonder why the Government refuses to act. Don’t they care?”