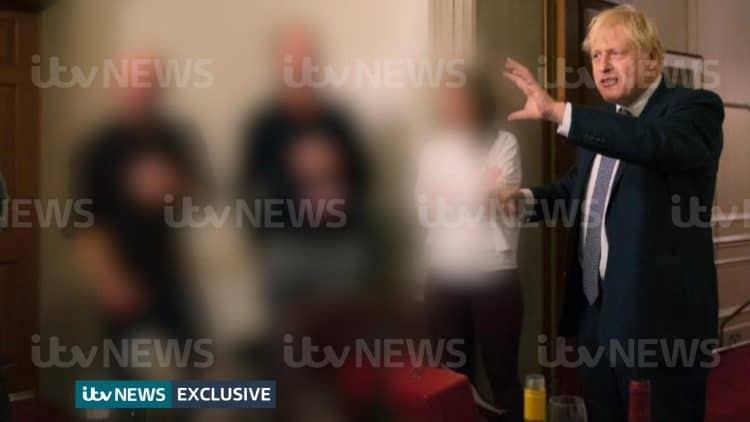 ITV handout photo dated 13/11/20 of a photograph obtained by ITV News of the Prime Minister raising a glass at a leaving party on 13th November 2020.

Images showing Boris Johnson raising a glass at a leaving party in Downing Street during lockdown restrictions have sparked fresh allegations that he lied to Parliament.

ITV News published four images on Monday showing the Prime Minister with a drink in his hand while standing behind a table littered with wine bottles and food.

Scottish Tory leader Douglas Ross demanded the Prime Minister explain why he believes his behaviour was “acceptable” when most will think the pictures “seem unjustifiable and wrong”.

“Boris Johnson said repeatedly that he knew nothing about law-breaking – there’s no doubt now, he lied.

“Boris Johnson made the rules, and then broke them.”

Well, you can make your own mind up as a clip of Cathrine West asking the PM about the gathering at Downing Street has gone viral again

At the time the PM replied: “No, but I’m sure whatever happened the guidance was followed & the rules were followed at all times.”

Related: The papers slam PM over lockdown pics but Mail decides to criticise rail unions instead