Hall & Willcox, who have been representing the tennis star, have a 'no jab no entry' policy for their offices. 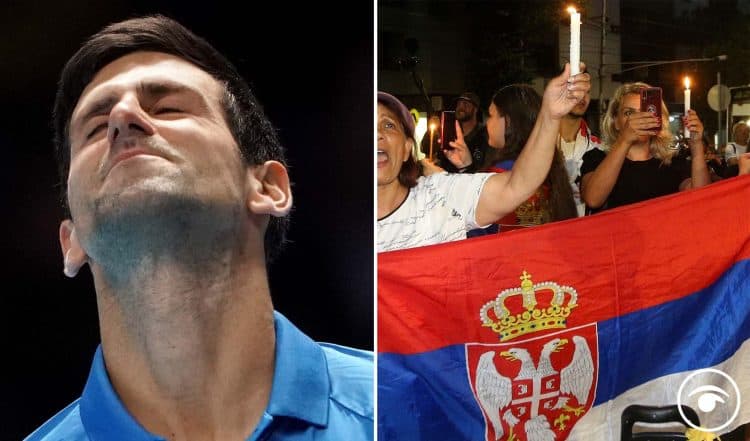 Hundreds of supporters of Novak Djokovic were celebrating as he left a hotel he has been detained in for a number of days due to Covid-related visa issues.

The tennis star has successfully challenged the Australian Government’s decision to cancel his visa, meaning he could now play in the Open championship.

Immigration minister Alex Hawke is, however, understood to be still considering whether to again cancel the player’s visa.

He was led out of the building around 8.45pm on Monday, with some even laying in the road in sheer jubilation as they chanted his name.

Police quickly swarmed his lawyer Paul Holdenson’s office in Melbourne where he was permitted to go during the hearing, which brings us onto an interesting discovery about his law firm.

A journalist from Crikey News looked at the Covid policies for Novak’s lawyers Hall & Willcox.

It appears they have a ‘no jab no entry’ policy.

It comes as Tennis legend Martina Navratilova insists she cannot defend Novak Djokovic’s choice not to get vaccinated amid the ongoing saga surrounding his Australian visa.

She told Good Morning Britain that the ‘saga’ was ‘getting crazier by the minute’, adding she couldn’t defend his choice not to get vaccinated.

‘It’s unbelievable, what a saga. It could have been avoided. I just wish Novak had taken that vaccination to begin with.

‘I admire him so much but I can’t defend the choice to not get vaccinated.

‘You have to take one for the team. It’s getting crazier by the minute.

‘We’re in such close contact in the locker rooms. I couldn’t wait to get vaccinated. I admire Novak and I know what it takes to be that committed.

‘I would be much more scared of getting sick from not being vaccinated than whatever side effects I might have from the vaccination. You really need to be more aware of everybody else.’

One of Djokovic’s fiercest rivals, Rafael Nadal, has described the visa situation as a “circus”.

Speaking to a Spanish radio station Onda Cero on Monday, he said: “Whether or not I agree with Djokovic on something, justice has spoken and has said he has the right to participate in the Australian Open and I think it is the fairest decision to do so.”

There have also been rumors that when he did get infected with COVID he continued his normal daily business.

Adil Ray tweeted: “Djokovic got COVID then apparently carried on as normal, hugging children. Unless his team can explain that, he should not be allowed to play tennis in a country where borders have been closed and families kept apart . He is not an exception.”