The Conservative minister was jeered when he actually said "anybody who supports a racist party leader shouldn't be standing for parliament." 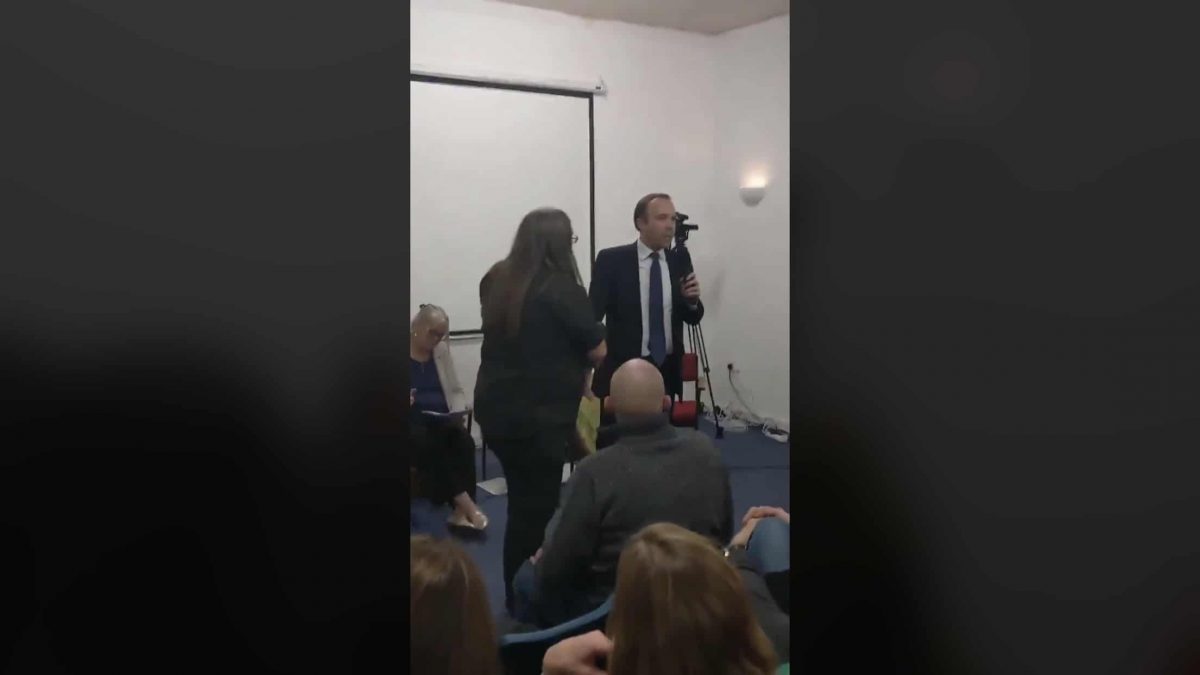 The Conservative general election campaign appears to have relied on one or two soundbites, and avoiding too much scrutiny into those claims in case they fall apart.

The Prime Minister Boris Johnson has been accused of chickening out of difficult interviews, debates and appearances – including swerving the traditional democratic institution of his own constituency hustings.

And watching the reaction to his cabinet colleague Matt Hancock in this hustings video that has gone viral it is easy to see why.

Matt Hancock appears at the best of times to be an empty bag of soundbites.

And when those soundbites unravel, he appears unable to back them up with any more cogent argument than simply repeating him.

His mauling by the hard-nosed political animals at Good Morning Britain was a defining moment of the election campaign. When even morning TV hosts were able to work out that a promise of 20,000 new police officers wouldn’t make up for the 21,000 police officers cut under his Tory party and the LibDem coalition. When Hancock was only able to repeat the soundbite, host Susanna Reid was forced to try and teach him some elementary maths and explain: “You know that all you’re doing is trying to fix the things that you caused.”

In another embarrassing and potentially defining moment that sums up this election, Matt Hancock’s constituents didn’t appear to fall for his brand of maths either.

At local hustings in his West Suffolk constituency, the giggles began when the Health Secretary said “mark me at my words” and then laughter became more riotous when he returned to his refrain of 50,000 nurses – the central Tory manifesto pledge that even Boris Johnson was forced to admit was nonsense as you can’t include the number of nurses you already employ in a figure for “new nurses.”

Local voters could clearly do the maths better than Hancock who appeared riled when a heckler said “get it right Matt.”

When his promises of more nurses fell flat in a constituency where voters feel let down by NHS cuts and shortages of doctors, a desperate-looking Matt Hancock tried a different soundbite which went even more awry.

If the constituents look impatient when he was still trying to pretend the country would get 50,000 new nurses, they were outraged when he tried to claim that Jeremy Corbyn has “an antisemitic and racist attitude.”

The Tory minister was drowned out with boos and jeers and shouts of “liar” as he appeared not to recognise the arch hypocrisy in telling his constituents that “anybody who supports a racist party leader shouldn’t be standing for parliament.”

Hancock appeared not to appreciate the irony of his comment coming in a week in which more of Boris Johnson’s racist, prejudiced and condescending remarks, writings and musings emerged; Johnson was forced to apologise for islamophobia; a week in which the former Conservative Party chair warned of the “impunity” of racists in her party, and the increase in violent attacks against Muslim women that followed Johnson’s racist remarks