The video footage showed animals at a site providing the St Helen's Farm dairy company with goats milk being punched, kicked and hit with poles. 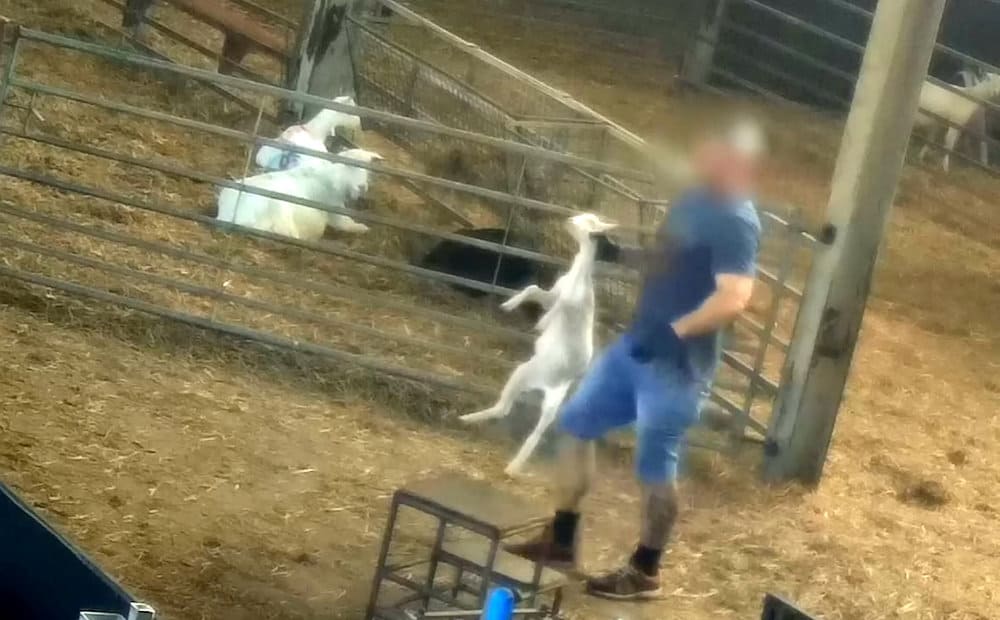 A firm supplying supermarkets with goats milk products today confirmed it had launched an investigation after disturbing undercover footage revealed animals being abused.

The video footage showed animals at a site providing the St Helen’s Farm dairy company with goats milk being punched, kicked and hit with poles.

It was taken by undercover activists from animal rights group Surge at Far Marsh Farm in Hull, East Yorks, earlier this year.

St Helen’s Farm – which supplies goat milk products to Tesco, Sainsbury’s and Waitrose – today said the footage was ‘distressing’ and said it had launched its own investigation.

The company sells goat’s milk, butter, cheese and yoghurts to a number of UK shops and supermarkets.

But following the release of the footage, Tesco announced that it had suspended sales of the firm’s products while they “investigate the matter further”.

Ed Winters, Surge co-director said: “St Helen’s is regarded as the best of the best when it comes to goat farming, however that means nothing for the goats who are exploited and treated as objects.

“They are nothing other than commodities for St Helen’s to exploit for profit, and contrary to the social media marketing that St Helen’s use, these animals suffer immensely, their bodies thrown around, hit and discarded.

“Unfortunately for animals, St Helen’s really is as good as it gets, meaning that the only way we can avoid paying for animal cruelty, is to buy the plant based alternative instead.”

Surge claim to have found repeated incidences of punching, kicking, excessive tail twisting, swearing and shouting, and beating with sticks.

Following the release of the video, St Helen’s Farm distanced themselves from the ‘utterly unacceptable’ and ‘extremely distressing’ scenes captured on film.

They say they have stopped supply from Far Marsh Farm, where the shocking footage was filmed.

“We find this utterly unacceptable and extremely distressing and cannot understand why any individual would treat animals like this.

“We took immediate action by stopping the supply from Far Marsh Farm and launched a thorough investigation that is now well underway.

“We have been informed that three employees have already been dismissed for gross misconduct.

“We can also confirm that an independent investigation is being carried out at this farm.

“While this issue related to one single farm, we are immediately instigating additional independent audits to verify that welfare standards are always being met at all of our suppliers’ farms.

“All farms that supply us with milk are required to comply with a rigorous code of conduct, are audited regularly and hold several animal welfare accreditations.

“The behaviours shown in the footage are totally unacceptable and we are reviewing why this was not picked up earlier and what additional measures are needed to protect animal welfare going forward.”

Related – Brexit food standards: ‘Not even Marie Antoinette…it is let them eat crap’