"That footage that everybody saw is literally my home." 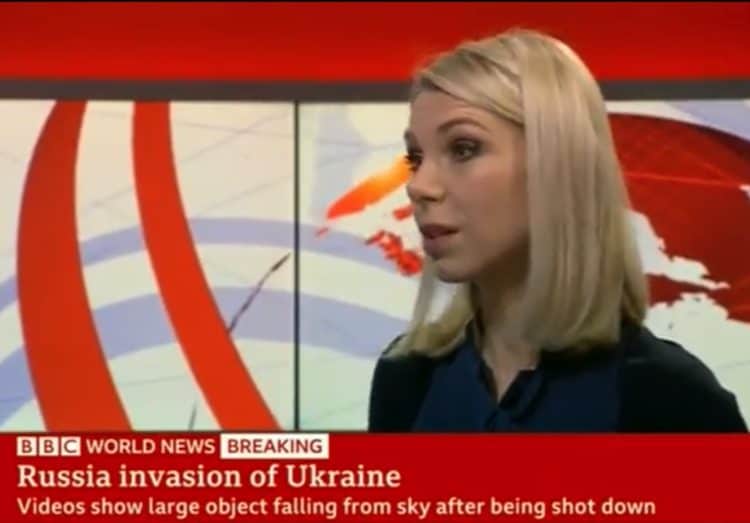 A Ukrainian BBC journalist unexpectedly saw images of her home being targetted by Russian bombs as she reported live for the BBC.

Olga Malchevska revealed that the building she lives in was “bombed at night” before realising that the images she was being asked to comment on were that same building.

“When we agreed yesterday about coming to the studio in the morning I could not imagine that at 3am London time I would find out actually my home is bombed,” she said.

And turning to look at the footage she said: “That footage that everybody saw is literally my home.”

Russian troops are bearing down on Ukraine’s capital, with gunfire and explosions resonating ever closer to the government quarter, in an invasion of a democratic country that has fuelled fears of wider war in Europe.

Amid growing casualties — including shelling that sliced through a Kyiv apartment building, bridges and schools — were increasing signs that Moscow may be seeking to overthrow Ukraine’s government, in Vladimir Putin’s boldest effort yet to redraw the world map and revive Moscow’s Cold War-era influence.

The US and other global powers slapped ever-tougher sanctions on Russia as the invasion reverberated through the world’s economy and energy supplies, threatening to further squeeze ordinary households.

UN officials said they were preparing for millions to flee Ukraine, sporting authorities sought to punish Russia on global playing fields, and Nato leaders called an urgent meeting to discuss how far they can go to challenge Mr Putin without engaging Russian forces in direct war.

Day two of Russia’s invasion focused on the Ukrainian capital, where Associated Press reporters heard explosions starting before dawn and gunfire was reported in several areas.

Ukrainian authorities used armoured vehicles and snowploughs to defend Kyiv and limit movement, and said Russian spies were seeking to infiltrate the city.

Russia’s military said it had seized a strategic airport outside Kyiv that would allow it to quickly build up forces to take the capital.

It claimed to have already cut the city off from the west — the direction most of those escaping the invasion are heading in, with lines of cars snaking towards the Polish border.

Related: Romanians and Moldovans pull together to welcome Ukrainian refugees