The Department of Health said it was trying to find ‘as many passengers as we can’ who recently travelled to the UK from Wuhan. 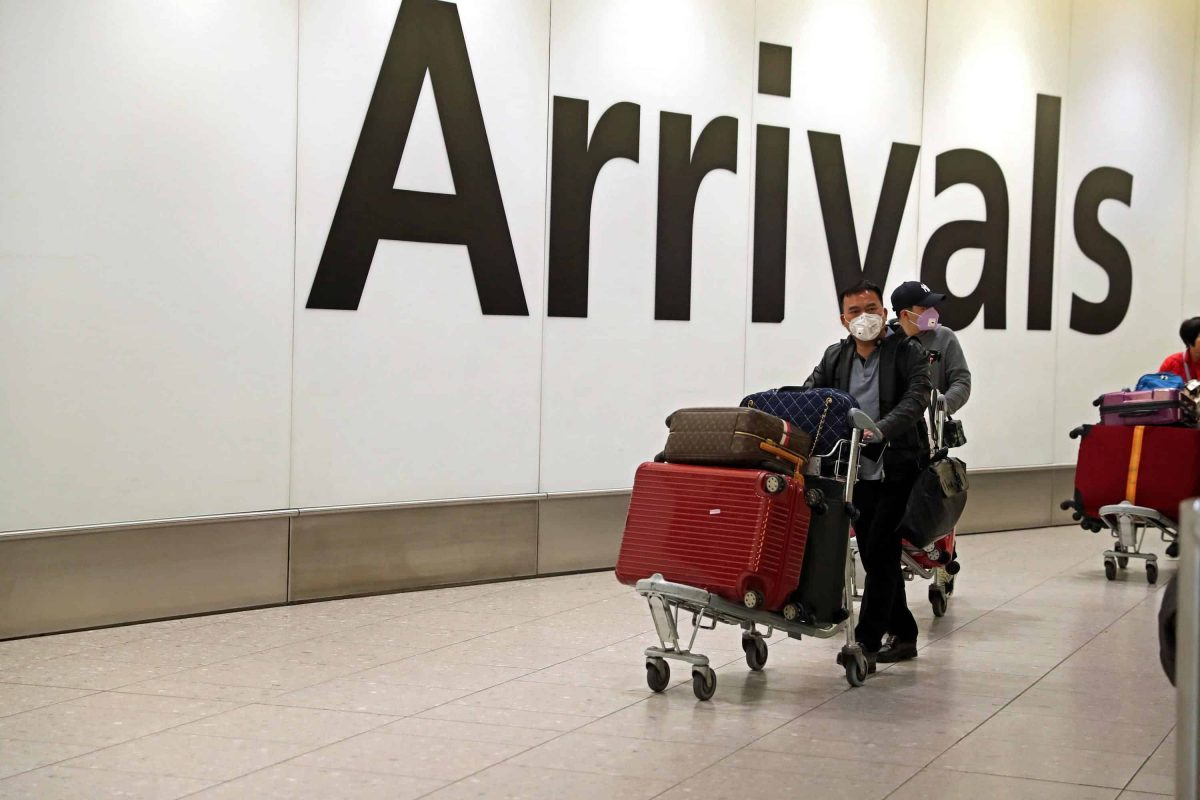 Health officials have teamed up with Border Force agents and airlines to try to track down around 2,000 people who have recently flown to the UK from the region of China most affected by the deadly coronavirus outbreak.

The Department of Health (DoH) confirmed it was trying to find “as many passengers as we can” who came to Britain from Wuhan, China, in the past two weeks to check on their wellbeing.

DoH has confirmed the tests for a patient in Northern Ireland are negative for coronavirus.

Northern Ireland’s Chief Medical Officer Michael McBride said: “I am being kept fully informed about the steps being taken to protect the public by the Public Health Agency and I am providing the minister with regular updates.”

It is understood Border Force officers have been recruited to help speed up the search for passengers as testing for the virus continues in the UK.

England’s Chief Medical Officer Professor Chris Whitty said 14 people were given the all-clear on Thursday but more were being checked over, while the illness has reached Europe after three cases were confirmed in France on Friday.

Prof Whitty said there was a “fair chance” cases will emerge in Britain as the overall number reported around the world climbed to more than 1,200, including 41 deaths, all in China.

Public Health England would not comment on the results of further tests on Friday night and said an update would be issued on Saturday afternoon.

The professor spoke following a meeting of the Government’s Cobra emergency committee in Whitehall on Friday, chaired by Health Secretary Matt Hancock.

He said: “I am working closely with the other UK chief medical officers.

“We all agree that the risk to the UK public remains low, but there may well be cases in the UK at some stage.”

He added: “The UK has access to some of the best infectious disease and public health experts in the world.

“A public health hub will be set up in Heathrow from today. This consists of clinicians and other public health officials, in addition to existing port health measures.”

In an interview, Prof Whitty said: “We think there’s a fair chance we may get some cases over time.

“Of course this depends on whether this continues for a long time, or whether this turns out to be something which is brought under control relatively quickly.”

He added: “I think we should definitely see this as a marathon, not a sprint, we need to have our entire response based on that principle.

“What we don’t know is how far it’s going to spread, that really is something we need to plan for all eventualities.”

The @CMO_England provides an update on #coronavirus.

The public health hub at Heathrow will be staffed by a rotating team of seven clinicians working in shifts to support patients on arrival.

This is in addition to medical staff who are already permanently in place at all UK airports, the Department of Health said.

There are no plans to introduce blanket temperature screening of travellers due to the fact it can take seven to 10 days for symptoms of the virus to appear.

All 14 people tested in the UK are thought to have visited Wuhan – the Chinese city where the outbreak originated.

Four out of five patients tested in Scotland were from China, Downing Street said.

One of those cleared of the virus was Michael Hope, 45, who spent two days in quarantine this week after returning to Newcastle from Wuhan.

China has expanded its lockdown against a deadly new virus to an unprecedented 36 million people and rushed to build a prefabricated hospital for victims as the outbreak cast a pall over Lunar New Year, the country’s biggest holiday.

Authorities in Beijing and other cities cancelled many public celebrations and other events marking the event, which falls on Saturday.

French health minister Agnes Buzyn said that all three of the people who tested positive for the virus in her country had travelled to China and two were from the same family.

One of the people, a 48-year-old man, passed through Wuhan, the epicentre in China for the virus, before travelling to France on Wednesday, the minister said.

And the United States reported its second case, involving a Chicago woman in her 60s who was taken to hospital after returning from China but is reported to be doing well.

.@DHSCgovuk, @PHE_uk and @NHSEngland experts are closely monitoring the outbreak of a novel coronavirus in Wuhan, China. If you have travelled to the affected area, make sure you know what to do if you experience symptoms: https://t.co/vvIWp72flo pic.twitter.com/Rz9rQRXzw8

Australia also confirmed its first case in the state of Victoria, involving a visitor from China, a man in his 50s, who was said to be in a stable condition.

In China, an unprecedented lockdown keeping people from travelling was expanded to more than 50 million residents.

Symptoms of coronavirus include fever, sneezing, coughing and shortness of breath.

PHE guidance to GPs says anyone with suspected coronavirus should be placed in a room away from other patients and staff with the door closed.

They should not be allowed to use communal toilet facilities or be physically examined, it adds.

A letter from Prof Whitty to clinical staff said anyone who is confirmed as having the virus will be transferred to an Airborne High Consequence Infectious Disease centre (HCID).

There are four interim Airborne HCID centres in England – two in London, one in Liverpool and one in Newcastle.