The ban applies to the “Schengen Area”, but not the UK or Ireland. 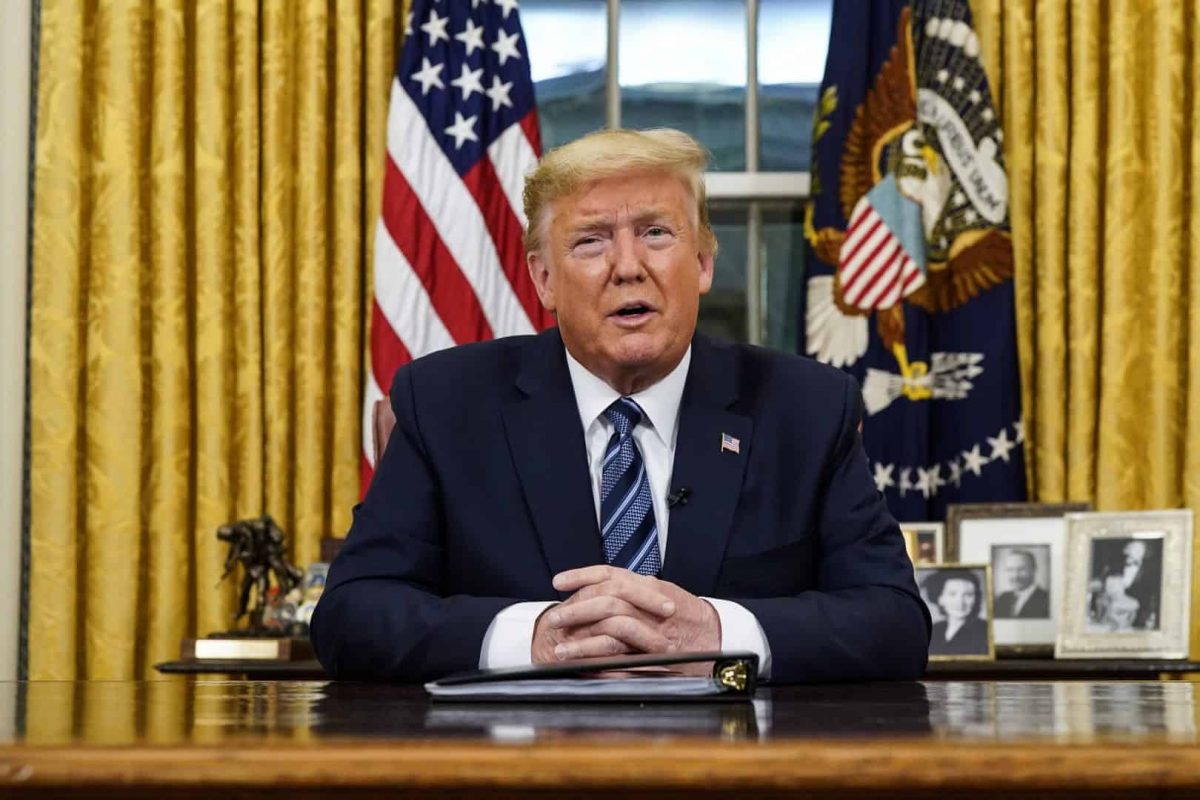 President Donald Trump said on Wednesday night he was suspending all travel between the United States and Europe – excluding the UK and Ireland – for 30 days starting on Friday as he seeks to combat the coronavirus.

Mr Trump made the announcement in an Oval Office address to the nation, blaming the European Union for not acting quickly enough to address the outbreak of the virus and saying US clusters were “seeded” by European travellers.

“We made a lifesaving move with early action on China,” Mr Trump said. “Now we must take the same action with Europe.”

Doesn’t apply to UK or Ireland

Mr Trump said the restrictions would not apply to the UK. A list of 26 affected countries published on the US Homeland Security website also confirmed Ireland was not among nations subject to the ban.

Homeland Security officials later clarified the new travel restrictions would only apply to most foreign nationals who had been in the “Schengen Area” at any point for 14 days prior to their scheduled arrival to the United States. The area includes Italy, German, Greece, Austria, Belgium and others.

It doesn’t apply to legal permanent residents, immediate family of US citizens or others “identified in the proclamation.”

The president said the US would monitor the situation to determine if travel could be reopened earlier than the 30-day period.

He said “we are marshalling the full power” of the government and private sector to protect the American people.

“This is not a financial crisis”

Mr Trump said he was also directing agencies to provide unspecified financial relief for “for workers who are ill, quarantined or caring for others due to coronavirus,” and asked Congress to take action to extend that relief.

He said the US would defer tax payments for some individual and business filers for three months to lessen the financial impacts of the virus outbreak. He said the Small Business Administration would also make low-interest loans available to businesses to help them weather the storm.

“This is not a financial crisis,” he said. “This just a temporary moment of time that we will overcome together as a nation and as a world.”

The president also reiterated his call on Congress to pass a cut to the federal payroll tax in order to stimulate the economy.

Mr Trump had been reportedly considering new travel advisories, a national disaster declaration and a delay in the tax filing deadline.

Congress, for its part, unveiled a multi-billion dollar aid package that was expected to be voted on by the House as soon as Thursday.

After days of playing down the threat, Mr Trump changed gears with his Oval Office address.

The mounting effort to contain the virus and financial fall-out intensified on a gruelling day.

The number of confirmed cases of the infection topped 1,000 in the US and the World Health Organisation declared the global crisis was now a pandemic.

As government officials warned that the outbreak in the US would only worsen, the Capitol was set to halt public tours of the building as the shifting developments raised questions, urgency and a new level of unease.

“I can say we will see more cases, and things will get worse than they are right now,” Dr. Anthony Fauci, director of the National Institute of Allergy and Infectious Disease, said in testimony before the House Oversight and Reform Committee. He said the virus was “10 times more lethal than the seasonal flu”.

In a week of mixed messages and false starts, Washington suddenly seemed poised to act.

“I am fully prepared to use the full power of the Federal Government to deal with our current challenge of the CoronaVirus!” Mr Trump tweeted before a meeting with bankers in which he offered assurances that “we are going to get the problem solved”.

“Now we’re hitting a patch and we’re going to have to do something with respect to getting rid of this virus as quickly as possible and as safely as possible.”