Boris Johnson responding to the findings of the Grenfell Tower inquiry was forced to admit today that survivors were “overlooked and ignored” before the tragic blaze and “shamefully failed” after it. 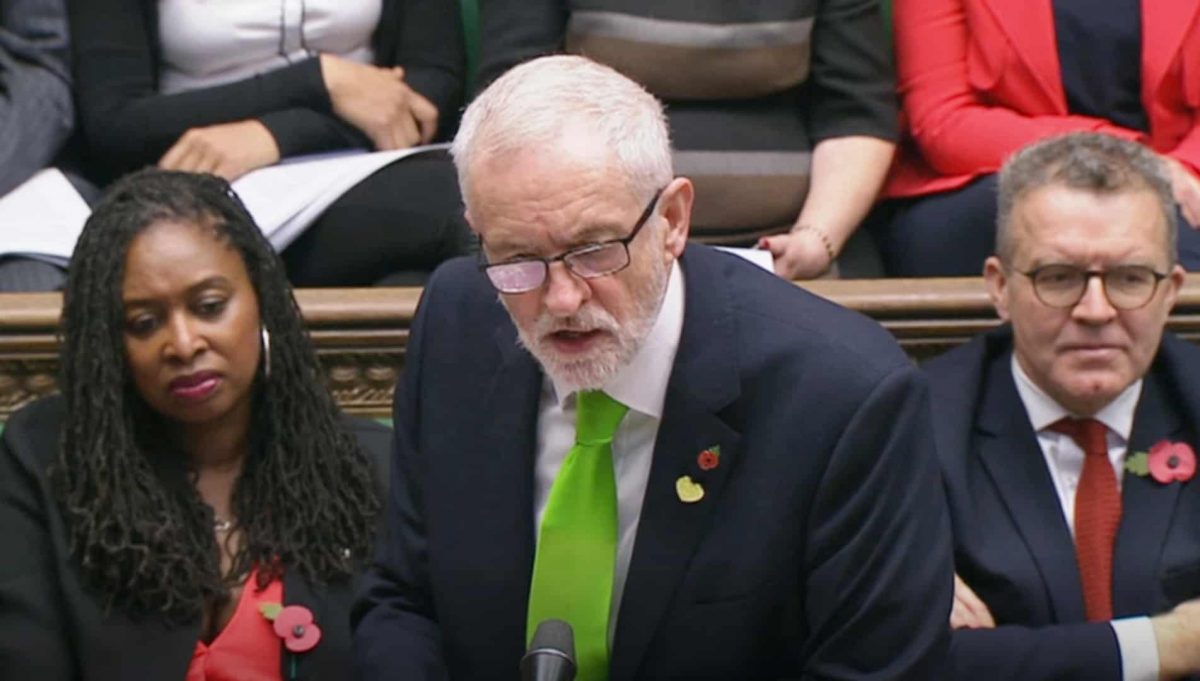 As MPs debated the findings of the Grenfell Tower inquiry, Jeremy Corbyn marked the occasion by wearing a green tie to the House of Commons.

Clearly few Conservative MPs had concerned themselves with any survivors or campaigners for long enough to realise the significance of the colour honouring the 72 who died in the tower block blaze in 2017.

“I know you’re all jealous of my tie, but it’s OK,” said the Leader of the Opposition trying to defuse the embarrassing braying from across the benches which interrupted him.

It was left to Theresa May, who ironically as Prime Minister was criticised for being distant from Grenfell Tower survivors and their needs, to hiss at her colleagues on the Tory backbencher: “It’s for Grenfell.”

Their leader Boris Johnson responding to the findings of the Grenfell Tower inquiry was forced to admit today that survivors were “overlooked and ignored” before the tragic blaze and “shamefully failed” after it.

Earlier MPs held a minute silence to honour those who perished in the tower block fire.

“Shame on the fools who mocked Jeremy Corbyn for wearing a green tie in solidarity with the 72 Grenfell Tower victims at #PMQs” tweeted Labour MP David Lammy.

“At best it shows unawareness of those whose lives were lost due to cuts, deregulation and the degradation of social housing. At worst it shows contempt.”

A Grenfell campaign group unveiled a series of billboards criticising the inquiry while also condemning London fire chiefs for their response to the tragedy.

Seventy-two people died after the 24-storey residential tower block in north Kensington, London, was engulfed in flame following a kitchen fire on June 14 2017.

Justice 4 Grenfell unveiled three billboards which bore the words: “Cover up 72 dead, never again”, “Grenfell Inquiry Report Recommendations: Government does not have to implement…” and “How come…???”.

Ms Bolton, who lost family in the blaze, said: “I live in the area and I lost people to the fire.

“From what we’ve heard with the reports with the fire service, you can see that there were certainly mistakes that were made.”

But she praised the individual firefighters, saying: “Those firefighters went into that building and not one of them gave up.

“They needed strong command, they needed strong guidance and with what’s coming through from the report it seems as though there have been things that have been lacking in regards to that, so definitely that does need to be addressed.

“In terms of having justice, we need to know who was accountable and why people died that night.”

Referring to the inquiry, which is chaired by Sir Martin Moore-Bick, Ms Bolton said: “I feel that the inquiry is actually back to front, the inquiry should have started with challenging what led up to Grenfell.

“We need to find out what led up to Grenfell and why that fire started in the first place.

“Deregulation and cuts within the fire service, within social housing, all of those things, it should have been able to start there.

“For us, justice for Grenfell is about leaving a legacy for Grenfell and that means challenging social change.

“Grenfell was a microcosm of everything that is wrong with this country today, about social housing, about deregulation, about cuts, about austerity, about simple people wanting to be able to work and live in decent housing.”

The cousin of Mahad Egal, who escaped his fourth floor flat in the burning tower with his wife and young children, told how she watched the tragedy unfold from her apartment in a neighbouring tower block.

The family member, who did not want to give her name, said: “With regards to the fire brigades, they did a fantastic job actually.

“The community did everything they could themselves but there wasn’t much support.”

“It’s still horrific to think about – just the word Grenfell …”

She said of Mr Egal: “He’s still in temporary accommodation.

“My cousin is in that predicament, he lived in that building … he was in Grenfell, he was living on the fourth floor.”

An elderly man who said he lost three friends in the fire said the Government needs to “just get things sorted”.

Hossien, 68, who lives near Latimer Road station, said he still visits the memorial place near the tower several times a year to see pictures of his friends and read the messages left behind.

Asked on what he thought of the first stage of inquiry, he said: “The Government are crooks, many more fires will happen if they don’t tackle the real issues like the structure of these buildings … they need to stop behaving this way and just get things sorted.”