The judge said the words Robinson used in the video would have been understood by viewers as “an incitement” to harass the defendants and “gave rise to a real risk the course of justice would be seriously impeded”. 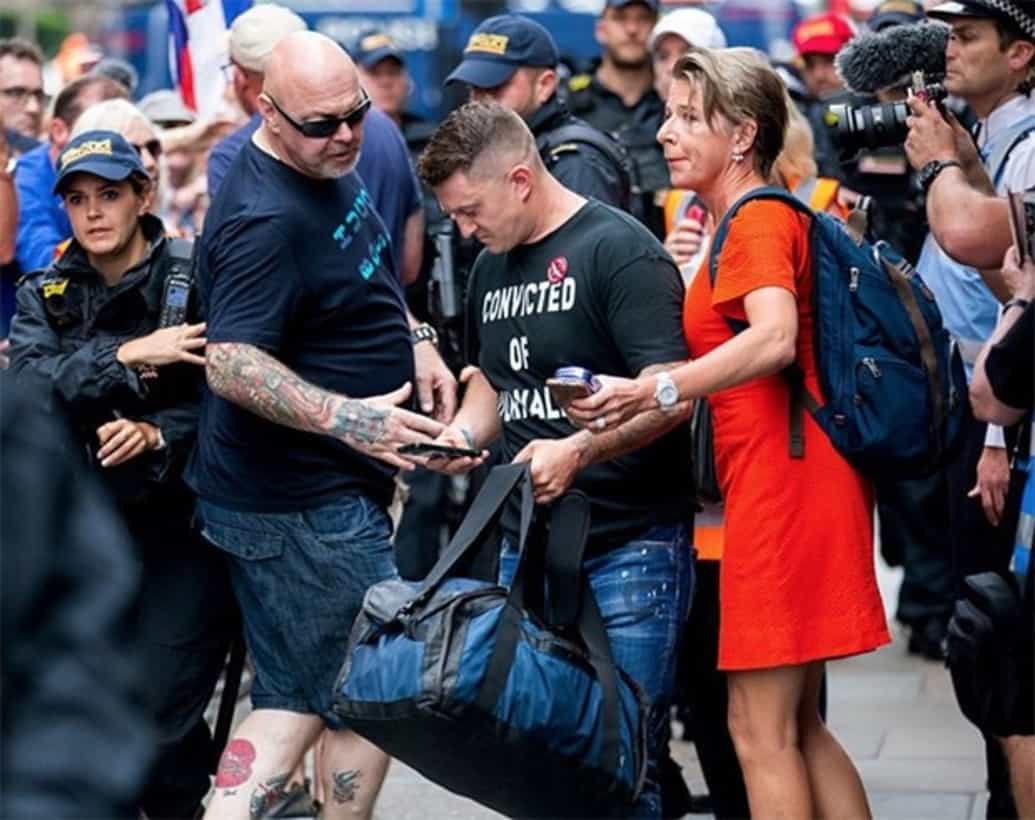 Tommy Robinson was sentenced to nine months – six months plus three suspended for contempt of court over a video he broadcast on social media which featured defendants in a criminal trial.

Only immediate custody was commensurate with the seriousness of the case the court heard. Passing sentence today, judge Dame Victoria Sharp said of Robinson:

“He has lied about a number of matters and sought to portray himself as the victim of unfairness and oppression.”

The suspended committal order was activated in full. Total penalty was therefore was nine months — 39 weeks.

The former English Defence League (EDL) founder, whose real name is Stephen Yaxley-Lennon, had already served 10 weeks: 138 days. So he has been imprisoned for 19 weeks but will be released halfway.

His lawyer was forced to apologise when he arrived late for court. “It’s not a very good start,” replied Dame Victoria Sharp.

Anyone found in contempt of court can be jailed for up to two years, receive an unlimited fine, or both.

Robinson’s supporters thronged outside the Old Bailey – including attention-seeking controversialist Katie Hopkins, who he arrived with – and UKIP leader Gerard Batten, who addressed those gathered, insisting “this is a political not a judicial decision.” Batten was greeted by chants of “Bulldog” and “Gerard.”

Violent clashes erupted outside court after the sentencing was booed by Robinson’s supporters. Some pelted police with bottles and cans and officers donned their helmets.

Robinson was found to have committed contempt of court following a two-day hearing at the Old Bailey last Friday.

Dame Victoria Sharp and Mr Justice Warby found Robinson was in contempt in three respects when he filmed men accused of the sexual exploitation of young girls and live-streamed the footage on Facebook, in breach of a reporting ban, outside Leeds Crown Court in May 2018.

“Today’s sentencing of Yaxley-Lennon serves to illustrate how seriously the courts will take matters of contempt.

“Posting material online that breaches reporting restrictions or risks prejudicing legal proceedings has consequences, and I would urge everyone to think carefully about whether their social media posts could amount to contempt of court.”

Reasons for the Robinson Judgement

Giving reasons for the decision on Tuesday, Dame Victoria said Robinson encouraged “vigilante action” in the video, which lasted an hour-and-a-half and was viewed online 250,000 times on the morning of the broadcast.

The judge said the words he used in the video would have been understood by viewers as “an incitement” to harass the defendants and “gave rise to a real risk the course of justice would be seriously impeded”.

The full judgement can be found here.

In an appearance on the far-right conspiracy theory website InfoWars on Monday, Robinson asked US President Donald Trump to grant him asylum in America, claiming he faced being killed in prison if he was jailed on Thursday.

And then seemed to contradict the plea, with another plea for cash donations from his supporters, in a video filmed ahead of his sentencing on Thursday. Robinson claimed: “I genuinely believe that the best thing they can do for our cause is send me to jail.”

“You’ve added more support for me and for my cause,” Robinson added, addressing judges who considered the case.

“Depending what decision you make on Thursday, my support will be stronger than ever … either way I win.”

Throughout the Old Bailey hearing, Robinson denied any wrongdoing, saying he did not believe he was breaching reporting restrictions and only referred to information that was already in the public domain.

But Dame Victoria and Mr Justice Warby found he was in contempt by breaching the reporting restriction imposed on the trial, by live-streaming the video from outside the public entrance to the court and by “aggressively confronting and filming” some of the defendants.

A number of Robinson’s supporters who gathered outside the court on Thursday and Friday reacted angrily after the verdict was announced.

Robinson, 36, from Luton, Bedfordshire, broadcast the footage while the jury in the second of a series of linked grooming trials was considering its verdict.

The video was eventually viewed 3.4 million times after being shared following his arrest.

Robinson was jailed for 13 months after being found in contempt of court on the day of the broadcast.

He served two months in jail before being freed after the original finding of contempt was overturned by the Court of Appeal in August 2018.