Kutir’s Jaltarang (“from the sea”) menu will be available until the end of August. 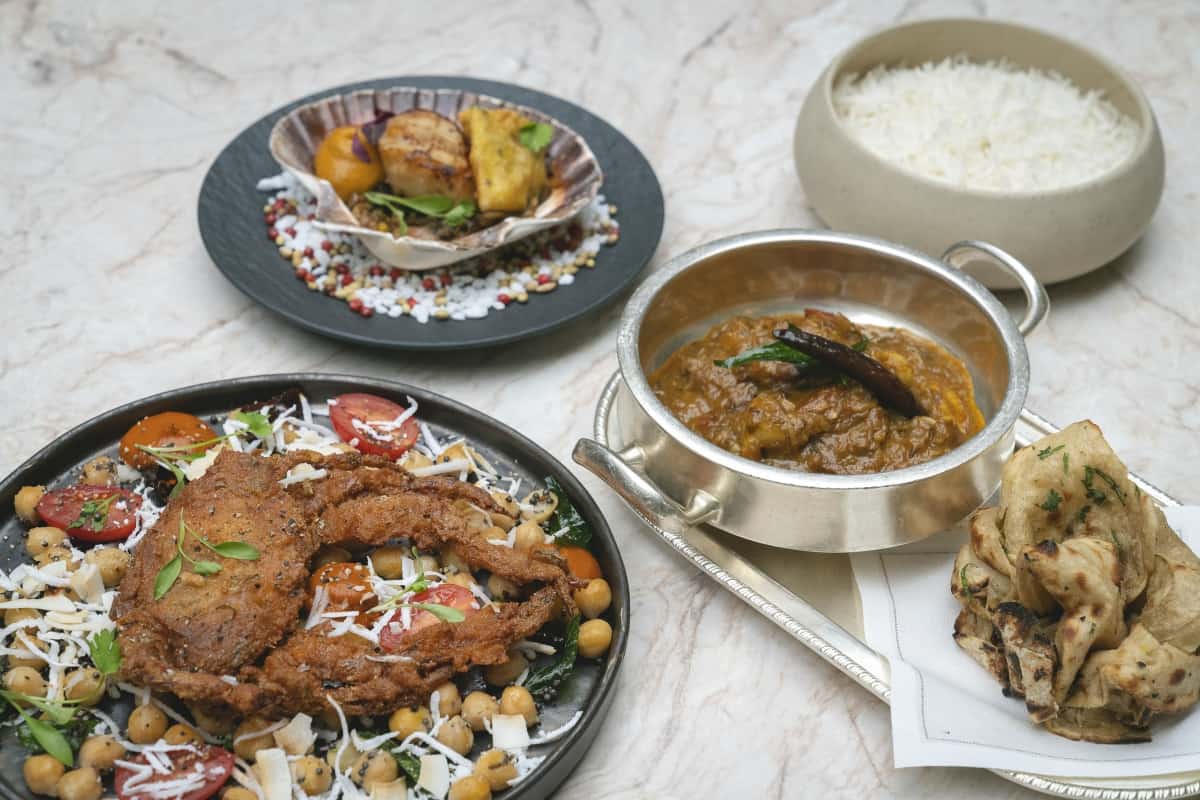 One of London’s best new restaurant openings of 2018, Kutir has launched a new ‘jaltarang’ (“from the sea”) menu for the summer.

Occupying a gorgeous Georgian townhouse off the King’s Road, the restaurant is the first solo project from chef Rohit Ghai. After working for Oberjo and Taj hotel groups in India, the chef has spent a successful decade in London, having held positions in the kitchens of restaurants such as Bombay Bustle, Gymkhana, Benares and Jamavar – where he became the first Indian chef in the UK to earn a Michelin star in under a year.

Co-founded with Abhi Sangwan, a long-term colleague of Ghai’s, Kutir (meaning “hut” in Sanskrit) is heavily inspired by the royal tradition of hunting expeditions in the forests and jungles of the Indian countryside. As such, the high-end food served here is representative of the feasting-style dining that occurs on hunting retreats, with the menu dominated by seasonal ingredients, harbouring a particular emphasis on game and seafood. Fittingly, the interiors at Kutir are also influenced by hunting expeditions. Lavish wallpaper features Bengal tigers and other wild animals. Light pistachio walls are complemented by plush leather seating and white marble table tops. Though much expense has clearly gone into the décor at Kutir, the space is surprisingly comfortable and service is similarly elegant but never overwhelming.

Alongside the a la carte menu filled with enough hits to stand out amongst central London’s countless high-end Indian restaurants, a set lunch or early dinner menu boasts great value (£20 two courses, £25 three courses) while a collection of ‘Expeditions’ tasting menus highlight a number of signature dishes. The new ‘Jaltarang’ menu features five courses and will be available until the end of August 2019, priced at £55 per-person. An exceptional flight of paired wines is also available for £45.

On the launch of the new menu, Rohit Ghai said: “It’s great to play around with a seafood theme as lobster, prawns and scallops are some of my favourite ingredients to cook with. They require delicate handling and spicing and I’m really happy with how balanced the Jaltarang menu is. Hoping people enjoy it this summer!”

Ideal for the summer, the Jaltarang menu’s dishes are typically lighter than the majority of the restaurant staples. Dinner begins with a starter prizing soft shell crab cloaked with a thin batter, gently spiced and plunged into seething hot oil. Alone, the cooking of the crab is faultless, but it’s the accompaniments of firm chickpeas, desiccated coconut, spiced tomato puree and garlic that contribute to an outstanding balance of flavours and ultimately elevate the dish.

A hand-dived scallop the size of a child’s fist was well-caramelised and served on the half shell alongside a surprisingly delicate aubergine fritter, accompanied by a suggestion of mustard. Glorious alongside the suggested glass of Alsatian Trimbach Riesling. A sizeable king prawn, on the other hand, was expertly grilled and simply served alongside some pickled radishes and a quenelle of raita embellished with mooli. As for the main course, a curry features Scottish lobster tails amplified with todi vinegar, black pepper, cumin and a generous amount of coriander, served alongside kaali dal, rice and buttery paratha. A remarkable example of Kutir’s elegant cooking, continued with desserts of mango cassata flecked with cranberry, kulfi and pistachio; or an extremely rich cube of firm dark chocolate mousse joined by crumbs of Valhrona chocolate and tubes of deep-fried banana.

Kutir’s Jaltarang menu is available until the end of August.