"Attacking a charity which saves lives in order to fuel anti-migrant hate is despicable." 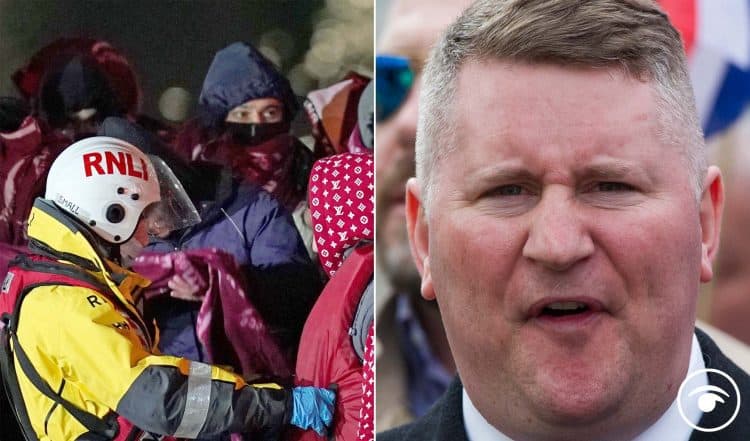 The RNLI has vowed to continue rescuing people “without judgement or preference” as it is bombarded with hateful emails as part of a far-right campaign.

It comes as migrants have been rescued from the Channel amid rough seas and brought to Britain overnight.

Pictures show a Lifeboat and Border Force vessel at the Port of Dover helping them disembark to be screened at arrival gates.

Around 100 people including babies and small children are believed to have been pulled from just four dinghies.

The lifeboat charity has been targeted over operations involving migrant boats in the English Channel, which are coordinated by government agencies.

The extremist political party Britain First mounted a new campaign on Thursday, sending emails and messages out to supporters urging them to join a “complaints drive aimed at the RNLI to pressure them to abandon their support for illegal immigrant [sic] and people trafficking and focus instead on saving British lives”.

“I am very, very angry that RNLI boats are being used in the English Channel to ferry illegal immigrants into Britain,” reads one version. “I urge you to cease these treacherous activities.”

Another option claims to be from someone who has “huge respect for the RNLI” but finds its “recent support for illegal immigration and people trafficking in the English Channel abhorrent”.

The group set up an automated online form that sends emails written by Britain First leaders to the RNLI’s chief executive, Mark Dowie.

The messages do not disclose any link to the group, but claim to be from “concerned citizens” and “taxpayers”.

Charity Hope not Hate responded to Friday’s attacks with a campaign to stand against Britain First and show solidarity with RNLI staff.

“Far right activists calling themselves ‘migrant hunters’ have harassed the RNLI for months,” a statement on its website reads.

“But now Britain First has launched a campaign to bombard the Royal National Lifeboat Institute with complaints over English Channel crossings.

“The group have set up an online form for supporters to send harassing messages to RNLI to stop its ‘treacherous activities’ and accuse them of being ‘engaged in people trafficking in the English Channel.’

“Attacking a charity which saves lives in order to fuel anti-migrant hate is despicable.

“We cannot forget that the never ending ‘immigration debate’ that fills our newspapers and television screens is a debate about people’s right to live.”