"It is deeply disrespectful to people who lost everything four years ago." 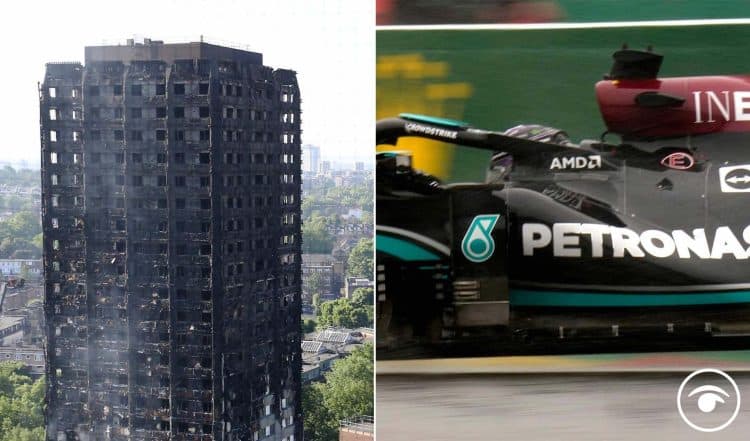 The boss of Formula One team Mercedes has apologised to Grenfell survivors and bereaved relatives after signing a partnership deal with a firm behind some of the insulation installed in the tower.

In a letter, Wolff said the 2017 fire in west London was “beyond imaginable”, and said he wanted to apologise for the “additional hurt” the Kingspan announcement had caused.

The apology comes after shadow levelling-up secretary Lisa Nandy said she hopes Lewis Hamilton, who drives for the Mercedes-AMG Petronas F1 team, is making his views “clearly known” to those who made the decision about the Kingspan deal.

Kingspan’s K15 insulation was one of the products installed on Grenfell Tower during its refurbishment, although the majority of the insulation used on the west London tower block was made by another company.

An inquiry is examining how Grenfell Tower came to be coated in flammable materials which contributed to the spread of flames which shot up the tower in June 2017, killing 72 people.

Grenfell United wrote to Wolff urging him to end the Kingspan deal.

In a letter to the group, posted on social media and sent directly to the group, Wolff said: “Thank you for your letter about our partnership with Kingspan, which I received yesterday.

“The tragedy of the Grenfell Tower fire was beyond imaginable to me, and it should never have happened.

“On behalf of our team, I would sincerely like to apologize to you for the additional hurt that this announcement has caused.

“It was never our intention to do so.

“The work of the public inquiry to establish the full causes of the tragedy is crucially important.”

Wolff said that prior to concluding the partnership his team “engaged with Kingspan in depth to understand what role their products played in what happened at Grenfell”.

He said: “Kingspan have stated that they played no role in the design or construction of the cladding system on Grenfell Tower, and that a small percentage of their product was used as a substitute without their knowledge in part of the system which was not compliant with building regulations and was unsafe.”

He added: “I know that this does not change in any way the awful tragedy you suffered, or the deep and ongoing pain felt in your community, and I would like to thank Grenfell United for the offer to meet in person for me to learn and understand better.

“I look forward to coming together as soon as we can.”

On Thursday, Communities Secretary Michael Gove said he would write to the Mercedes team to ask it to reconsider the deal, adding it was “deeply disappointing” it had accepted the sponsorship.

Ms Nandy said she supports Mr Gove in his criticism, but has written to him asking him to “take the same principled stance in relation to the decision by the Conservative Party to take millions of pounds in donations from property developers responsible for flats that have been covered in the same dangerous ACM cladding” since the fire in 2017.

Asked if she thinks Hamilton should speak out about those who sponsor his team, Ms Nandy told BBC Radio 4’s Today Programme: “I think the key point is that it’s not his decision and I hope that he is making his views clearly known to the people who have made this decision.

“Lewis Hamilton has been an ally of the Grenfell community.

“He’s spoken out about this issue before.

“I suspect he will be doing that behind the scenes, but the key is to make sure that all of us across the political spectrum ramp up the pressure to ensure that this doesn’t go ahead.

“It is deeply disrespectful to people who lost everything four years ago.

“They felt very invisible in the political system.

“That was what allowed this to happen in the first place.

“We’ve got to send a clear and unequivocal message that they are invisible no more, that people’s lives matter, and that we’ll stand with them while this inquiry is ongoing.”

In 2020 he posted a picture with a caption that said: “Today marks three years since the horrific Grenfell Tower fire in London.

“Remembering the 72 souls we lost and their loved ones, and everyone affected by this tragedy.”

Kingspan said in a statement: “The Grenfell Tower fire was a tragedy that should never have happened, and Kingspan supports the vitally important work of the inquiry to determine what went wrong and why.

“Kingspan played no role in the design of the cladding system on Grenfell Tower, where its K15 product constituted approximately 5% of the insulation and was used as a substitute product without Kingspan’s knowledge in a system that was not compliant with the building’s regulations.

“The new partnership with the Mercedes-AMG Petronas Formula One team reflects the ambitious sustainability targets of both organisations.”

Related: Watch: ‘They want Grenfell to be forgotten’: Fury at plans to demolish building