A bizarre pork pie chart and a front page splash about the prime minister's baby show Britain's bonkers press in all its glory. 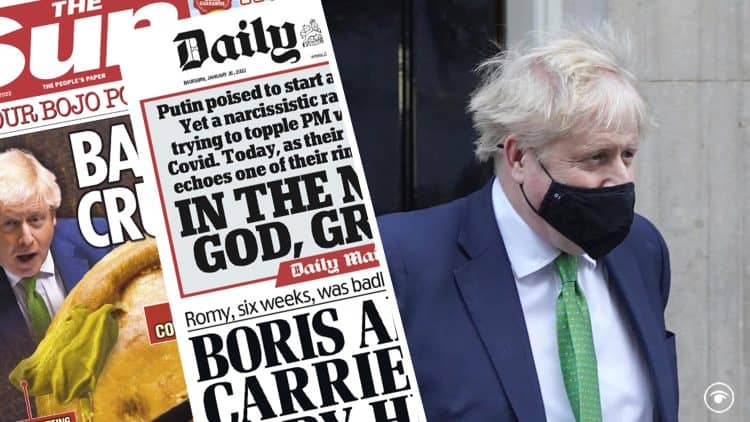 The Sun and the Daily Mail newspapers were outliers this morning as they came out in defence of our beleaguered prime minister.

Boris Johnson has vowed to battle on after a senior Tory demanded “in the name of God, go” and a Conservative MP defected to Labour over allegations of rule-breaking parties in Downing Street.

Former Brexit secretary David Davis called for the PM’s resignation in a Commons intervention on Wednesday before later warning the party faces “dying a death of 1,000 cuts” if they do not act swiftly to oust him.

Today’s papers report the prime minister is continuing to doggedly “cling to power” despite facing a coup, a loss in the polls and an explicit direction from one ex-minister.

The Guardian, the Daily Mirror and Metro also quote Mr Davis as directing the PM: “In the name of God, go!”.

The latter also features Mr Johnson’s scrapping of Covid rules, with masks no longer mandatory and a return to the office in England.

But the Daily Mail and the Express took a different view of it, encouraging their readers to back the PM.

And The Sun splashed ‘Battling PM crust ahead’ with a pork pie chart in what Owen Jones sarcastically described as being an example of our “completely normal media ecosystem”.