The chancellor is the only top Tory with a positive rating in the Red Wall, a survey revealed. 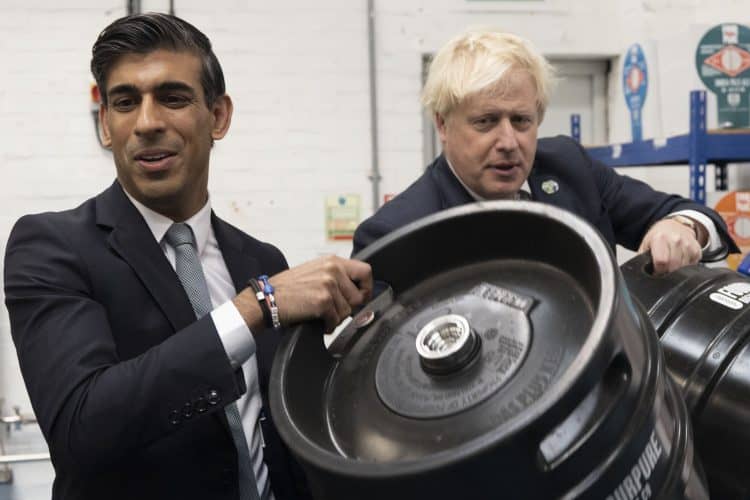 Rishi Sunak was revealed to be the most popular politician in the ‘Red Wall’, as his closest rival to succeed Boris Johnson jetted to Australia.

Liz Truss said she was holding defence talks Down Under as rivals for the Tory leadership started jockeying for position.

The foreign secretary, a favourite among Tory activists, missed Prime Minister’s Questions – and is nearly 10,000 miles away from Westminster as MPs plot to oust Johnson.

Truss’s avowed libertarianism has consistently propelled her to the top of popularity polls among Tory activists, who will choose the new leader.

The most recent survey by the ConservativeHome website gave her a favourability rating of +73, ahead of the rest of the cabinet, and miles clear of Johnson, who languishes at the bottom on -34.

Sunak sat in sixth place on that survey, at +49. But a new poll of Red Wall seats on Wednesday revealed that he is the most popular politician among voters as a whole.

His favourability rating in the key northern and Midlands seats won by the Tories in 2019 is +22, making him the only senior Tory liked by more voters than dislike him.

Truss, meanwhile, is on -7, while Johnson has collapsed to -28, according to a survey by JL Partners for Channel 4 News.

Some 42 per cent of Red Wall respondents said Sunak would be the best Prime Minister against 24 per cent for Johnson.

The same poll puts Labour into an 11 point lead in the must-win seats.

The survey puts Sir Keir Starmer’s Labour at 48 per cent in the must-win stretch of northern seats – and the Tories at 37 per cent.

It suggests that, if an election took place now, the Tories would lose all but three of their Red Wall seats. Just Dudley North, Bassetlaw and Great Grimsby would stay Conservative.

The main reasons for government’s sliding support in the area are Boris Johnson’s leadership and the ongoing scandal around lockdown-busting parties in Downing Street, polling suggests.

However longer-term issues, including immigration and the cost-of-living, are also playing a role in turning voters away from the Tories.

Labour, meanwhile, is now seen as more competent and capable than the Conservatives – as well as less divided, Channel 4 News reported.

It comes as the Tories have plummeted to a staggering 32 points behind Labour in London as “Partygate” devastates Johnson’s premiership.