It comes as Boris Johnson faces pressure to implement similar measures after it was found local restrictions "are not working." 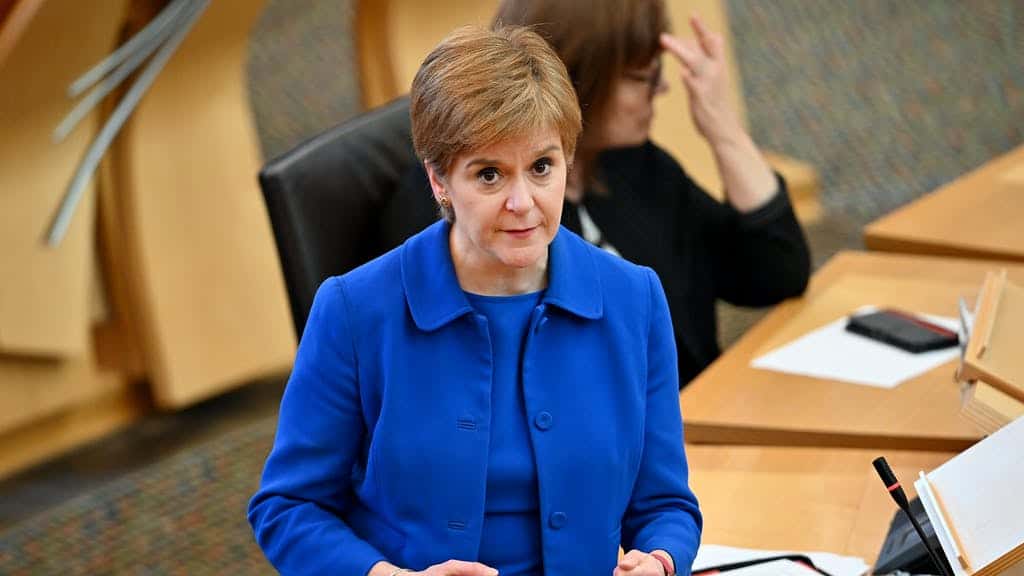 Nicola Sturgeon has announced announced a 16 day ‘circuit breaker’ lockdown in Scotland, with all pubs and restaurants across the central belt set to close.

The first minister outlined new measures today after more than 1,000 new confirmed cases of the virus in a single day for the first time.

From Friday, pubs, bars and restaurants nationwide will only able to operate indoors between 6am and 6pm, with alcohol only available outside.

However, all pubs, restaurants and bars will shut in Greater Glasgow and Clyde, Lanarkshire, Lothian, Ayrshire and Arran, and Forth Valley, with people in these areas also asked to avoid public transport unless absolutely necessary.

Sturgeon said she was “grateful” for the work done by hospitality businesses to stop the spread of coronavirus as she announced tough new measures.

“However, the evidence paper published today sets out why these settings present a particular risk.

“The R number seems to have risen above 1 approximately three weeks after the hospitality sector opened up.

“We know that more than one fifth of people contacted by test and trace, report having visited a hospitality setting.”

She announced that an additional £40 million in funding would be made available to support businesses that will be affected by the measures over the next two weeks.

It comes as Boris Johnson faced fresh pressure to consider similar measures in England after figures suggested local measures to contain the spread of coronavirus were not working.

Professor Calum Semple, a member of the Government’s scientific advisory panel who specialises in disease outbreaks, recommended a “circuit breaker” be considered on a national basis in a bid to slow the virus, rather than trying to reduce it at a later stage.

And Sir Keir questioned why constituencies such as Mr Johnson’s were spared extra curbs while northern seats with similar levels of coronavirus were hit with restrictions.

Speaking in a personal capacity, Prof Semple – a member of the Scientific Advisory Group for Emergencies (Sage) – told BBC Radio 4’s Today programme that “perhaps a circuit breaker a couple of weeks ago would have been a really good idea”.

He added: “It’s always easier to reduce an outbreak at the earlier stage than to let it run and then try to reduce it at a later stage.

“So, yes, circuit breakers are certainly something we should be thinking about on a national basis.”

According to the Government’s coronavirus dashboard, there were 2,783 patients with Covid-19 in hospitals in England and 349 patients on ventilators as of Tuesday.

The number of those admitted to English hospitals on Sunday – the most recent day for which the figures are available – was 478, almost double the figure seven days previously.

The figures for hospital admissions and patients on ventilators in England are the highest since June.

Case numbers have risen sharply in recent weeks, with 14,542 lab-confirmed cases of coronavirus in the UK as of 9am on Tuesday. A fortnight ago, on September 22, there were 4,926 cases recorded.

Labour leader Sir Keir questioned the way local restrictions had been introduced after colleague Jonathan Ashworth suggested there was a “suspicion” of “political interference” in favour of Tory heartlands.

Sir Keir said: “In the Prime Minister’s own local authority Hillingdon, today there are 62 cases per 100,000 yet no local restrictions. But in 20 local areas across England, restrictions were imposed when infection rates were much lower.

Mr Johnson hinted that tougher measures could be needed in the capital and the Midlands.

“I wish I could pretend that everything was going to be rosy in the Midlands or indeed in London where, alas, we are also seeing infections rise,” he said, as he called for a “concerted national effort”.

Sir Keir said 19 of the 20 areas which were first subject to targeted restrictions had seen cases rise.

“This is getting ridiculous.”