"We've had people who have been removed from the tree and taken to a cell - and then come straight back here after being released. We will stay here as long as it takes." 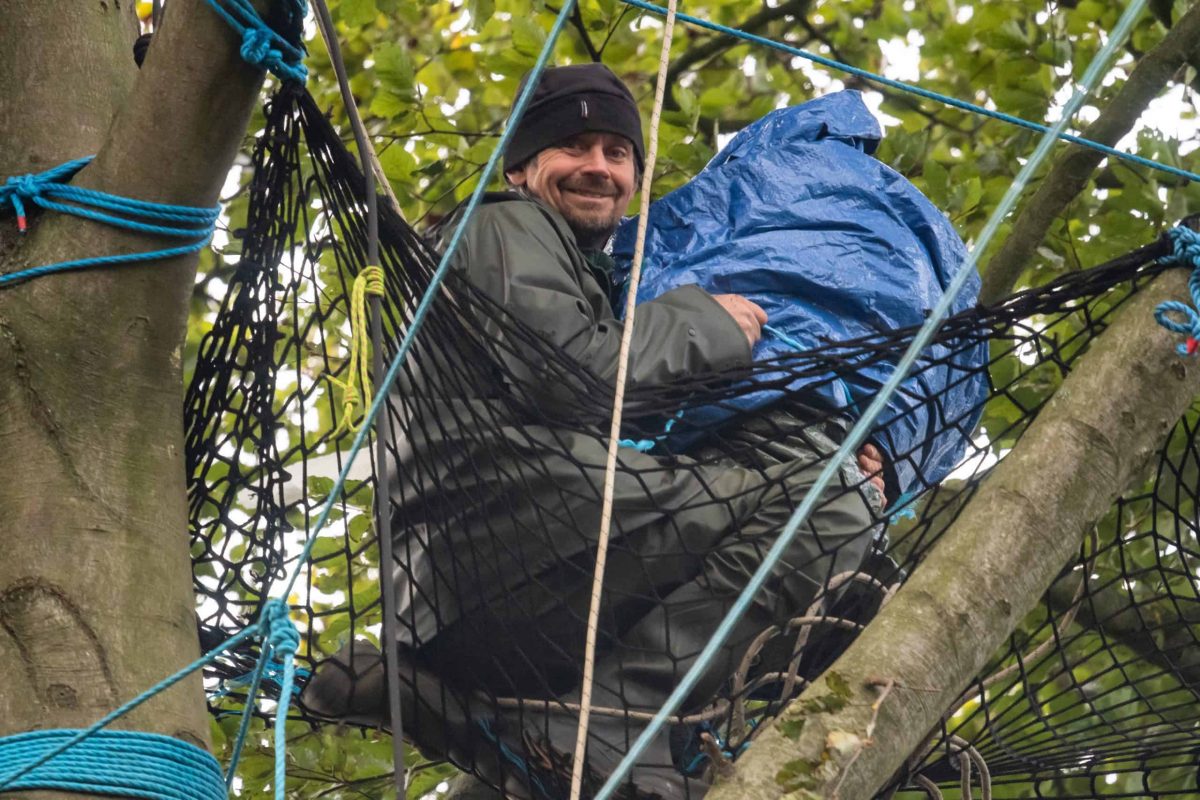 Swampy the actavist, real name is Daniel Hooper in a tree in Jones' Hill Wood in Aylesbury. Credit;SWNS

Britain’s original ‘eco-warrior’ was back campaigning again today after nearly a decade out the limelight.

The veteran activist known as ‘Swampy’ – real name Daniel Hooper – began his third day camped 30ft up a tree in a protest against the planned felling of woodland.

Swampy first found fame in the 90s after sleeping underground for a week to halt road tunnelling work.

Today he joined an HS2 rebellion group which has been holding out against eviction from woodland marked out for clearance for the controversial high speed rail line.

Swampy, 47, is one of ten people occupying a large treehouse structure, nicknamed The Beancan, up a single tree approximately 30 foot tall, in Jones’ Hill Wood in Aylesbury, Bucks.

Dad-of-four Swampy joined the protestors at the start of this week.

He has remained firmly up the tree as the HS2 National Eviction Team have removed similar treehouse structures from the treetops around them.

The woodland is one of 20 sites that have been identified as targets for clearance and ground works by HS2 from October 1st, with two-thirds of the 4.5-acre site due to be dug up.

Swampy has remained tight-lipped about his part in the HS2 rebellion protest.

But protestor Mark Keir, 59, who is one of 30 people camped on the ground in the woodland, said: “His being up the tree is saying all that it needs to say.

“Everybody knows he is up there – and it’s a great endorsement for us, because it’s getting our campaign a lot of attention.

“It’s been bringing lots of people down here, which really gives us a platform to spread our message as to why we are here.

“He is very welcome here.”

Mark, who has been live-streaming from the site, added: “We’re all feeling really good and really strong.

“We have lots of people here, both in the tree and on the ground, who every bit as much energy and as much skill for this cause as Swampy does.

“Ultimately, we just need to stop this thing, or slow it down so much that people will start really hearing what it is all about.

“We know that HS2 have none of the licences they need to work here.

“It’s such a biodiverse piece of land, it’s so beautiful here.

“They do not have the bat licence they need, or the dormouse licence, or anything. We’re hoping that we can try and stop this on those grounds.

“We’ve had people who have been removed from the tree and taken to a cell – and then come straight back here after being released. We will stay here as long as it takes.”

Eleven protestors have so far been arrested at the ancient woodland site over the last four days.

Swampy first hit the headlines in 1996, when he spent seven days and seven nights living in a tunnel dug by campaigners to stop the £50 million A30 dual carriageway link road in Devon.

He briefly re-emerged last year to join an Extinction Rebellion protest in Pembrokeshire, Wales, where he obstructed access to an oil refinery by attaching himself to a concrete block.

Hooper pleaded guilty at Haverfordwest magistrates’ court in October 2019 to wilfully obstructing free passage along a highway and was fined £40, with a surcharge of £32 and £85 in costs.

And now it seems he has roped his son into his old tricks – and the pair have no intention of being budged.

The extension of HS2 to Leeds “will probably not now go ahead”, Labour former transport secretary Lord Adonis has claimed.

He made the comment after the Government deferred decisions on the design of that section of the high-speed railway until after publication of an Integrated Rail Plan for the North and the Midlands.

Lord Adonis warned that this means ministers are “delaying indefinitely” the building of HS2 between Birmingham and Leeds.

He wrote on Twitter: “The Government is only now going ahead with the Manchester leg of HS2 and is delaying indefinitely the eastern leg to Leeds, Sheffield, Nottingham and Derby.

“By deferring decisions on (the) eastern leg of HS2 while confirming (the) Manchester leg, the Leeds leg will probably not now go ahead. Phase 2b will probably become just Manchester.”

He said: “We’ve always been clear that the eastern leg is being considered under our Integrated Rail Plan, which by the end of the year will outline how we will deliver better, more reliable services across the North and Midlands.”

In the Government’s response to a consultation on refinements to the design of Phase 2b, Mr Stephenson said it was “prioritising development of the western leg into Manchester” while “considering the best approach” for the eastern leg.

He went on: “Metropolitan growth in England north of London will now concentrate on (the) Birmingham-Manchester corridor.

“The whole eastern side of England, without HS2, is downgraded. A catastrophically big and bad decision.”

Alongside the announcement about the eastern leg, HS2 Ltd launched a consultation on proposals to expand Manchester’s high-speed rail platforms.

This is aimed at boosting connections between HS2 and Northern Powerhouse Rail (NPR), which is a project to improve services between the region’s major cities.

HS2 Ltd is also proposing to enhance its plans for Crewe station to enable it to be served by more HS2 services, and to build a train depot at Annandale, in Dumfries and Galloway.

Tim Wood, a director at Transport for the North, a cross-party group of northern leaders, said it was crucial that investment in HS2 and NPR “allows for benefits to be shared equally across the North”.

He went on: “We absolutely want to see the HS2 eastern leg developed.

“It dovetails entirely with our plans for Northern Powerhouse Rail and would deliver unrivalled rail connectivity to communities. That’s not only better and faster services to the likes of Leeds and Sheffield, but further beyond to York, the North East and up to Scotland.

“The Oakervee Review outcome recommended committing to the full HS2 plan, helping to level up the economy.

“We hope that the Government’s Integrated Rail Plan, set to be published later this year, will commit a sustained pipeline of investments for the North that includes both HS2 and Northern Powerhouse Rail.”

Related: HS2 bosses accused of being ‘blindsided by contact with reality’