“I was homeless myself… two o’clock in the morning, I’m sleeping on the porch of St Martin’s, somebody taps me, gives me a fiver and gives me a hug,” the charity's founder said. 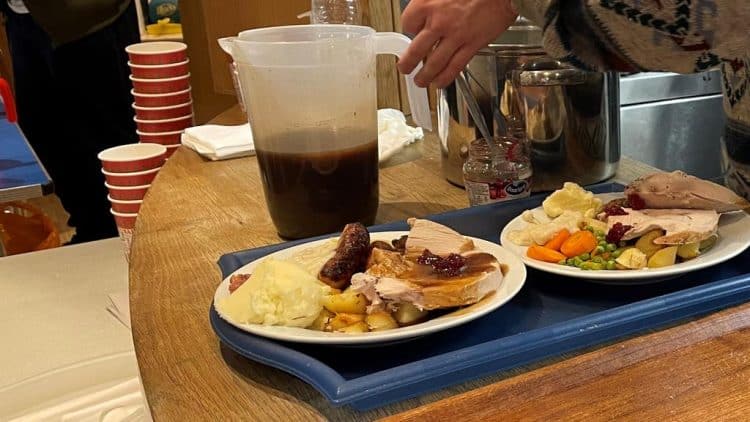 A soup kitchen charity hopes to “give humanity” back to homeless people by eating and talking alongside those they have prepared a three-course Christmas meal for.

Streetlytes prepared and served a traditional festive dinner – complete with Christmas presents and a festive film screening – to more than 60 people on Monday evening at St Stephen’s Church in Shepherd’s Bush, west London.

Rudi Richardson founded the charity, which provides free hot meals and basic necessities like clothing and advice, in 2007 after an encounter while he was living on the streets.

“I was homeless myself… two o’clock in the morning, I’m sleeping on the porch of St Martin’s, somebody taps me, gives me a fiver and gives me a hug,” the 66-year-old told the PA news agency.

“I thought I was dreaming. She left and then she came back and said ‘here’s a sandwich’.

“I ate the sandwich and tears came out as I felt that somebody gave me my humanity back – it was from that point we started Streetlytes.”

Garry Rashid, project co-ordinator and head chef at Streetlytes, said he was inspired to join the cause by a sandwich he received on Christmas Day 10 years ago.

“I was homeless living on Southbank in London – I used to sleep in St Thomas’ Hospital gardens,” Mr Rashid said.

“Christmas Day rolls around – I had no money, nowhere was open, even if I could have got hold of some money for some food.

“One of the security guards brought me out a turkey and cranberry sandwich… it was the only thing I ate that day but it kept me going for the next day.

“We’re a charity, we’re a people, that can keep people going until the next day.”

Mr Rashid and his team of volunteers began preparing the meal at 8am before serving at 5.30pm.

“We spend £3 a meal… I work on the premise I will not serve it if I will not sit down and eat it,” Mr Rashid, who has been at the charity for five years, told PA.

“What I love to tell my volunteers to do: ‘Once we’ve served our guests, grab a plate, join our guests. Eat with them, talk to people’.

“Over the five years I’ve been here, I’ve sat with every single one of my guests at least once. It’s amazing, you learn so much.”

Mr Rashid said the meal was made using entirely rescued food, from food redistribution charities such as City Harvest, and any surplus is given to the guests.

The starter of lentil soup was prepared by students from a local primary school, St Stephen’s.

The main course consisted of turkey, bacon and sausages, with vegetables including roast potatoes and parsnips, and vegetarian and halal options were available.

Volunteers wrapped socks donated by the clothing brand Sock Subs, complete with a ribbon and chocolates, to give as a present to the attendees and the 1994 festive hit Miracle On 34th Street was screened at the event.

The charity plans to offer three-course meals every Thursday and Friday for the next three months.

More information on Streetlytes, including how to donate and get involved, can be found at streetlytes.org