The plant, owned by Israeli firm Elbit Systems UK, has been repeatedly targeted by activists who claim the factory is involved in the supply of parts for drones used by the Israeli military against Palestinians. 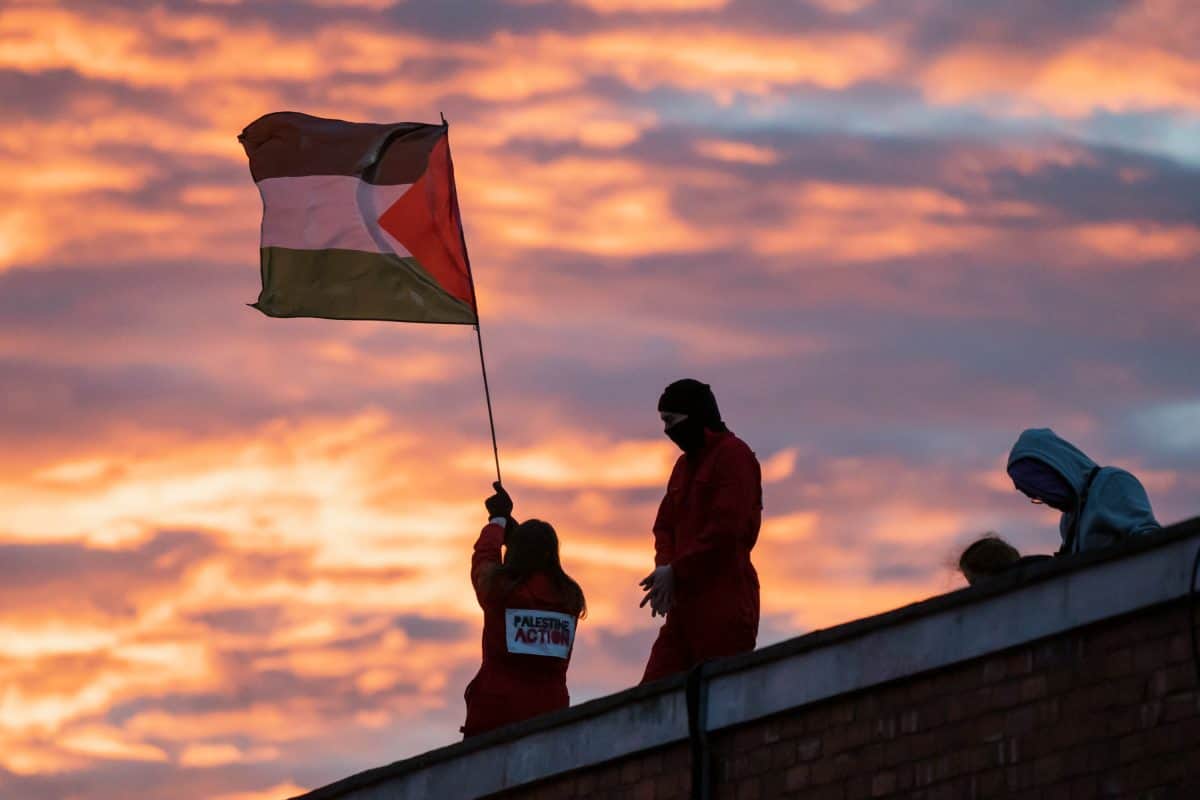 Six people have been arrested after a rooftop protest at a factory which pro-Palestinian activists have claimed supplies engines for Israeli military drones.

A handful of protesters from the group Palestine Action got onto the UAV Engines site in Shenstone, Lichfield, Staffordshire, in the early hours of Tuesday, according to the organisation.

Red paint was daubed across the front of the building and windows smashed with hammers, in what protesters claimed was the fourth such protest at the plant since September 2020.

The front gates were chained shut by activists, and one of their number was seen waving the Palestinian flag from the main building’s flat roof.

The plant, owned by Israeli firm Elbit Systems UK, has been repeatedly targeted by activists who claim the factory is involved in the supply of parts for drones used by the Israeli military against Palestinians.

Palestine Action asserted an earlier three-day “rooftop occupation” on the site in September 2020 had cost the firm £145,000.

At the start of this month, the group’s protesters blocked the entrance to the Elbit Ferranti factory in Oldham, Greater Manchester.

On that occasion activists were joined by those from Extinction Rebellion North, occupying the premises for about 16 hours.

In a statement following its latest “direct action”, Palestine Action said the group, formed in August 2020, would not rest until Elbit’s “chain of weapons factories are hounded out of the UK”.

Following the conclusion of the Shenstone protest, Staffordshire Police said: “Six people have been arrested on suspicion of criminal damage and related offences after police were called to reports of a protest at a factory site in Shenstone, Lichfield shortly after 2am this morning.

“Three men and three women have been detained and remain in police custody after officers brought the demonstration to a safe and peaceful conclusion at around 4.45pm (on Tuesday).”

The protest comes after the Ministry of Defence confirmed last month that Elbit had won a £102 million contract for new “sensor-to-shooter” surveillance system, which feeds real-time battlefield targeting information to infantry, aircraft and artillery.

Defence procurement minister Jeremy Quin, speaking at the time the deal was publicly announced, said: “This contract with Elbit Systems UK not only delivers the very latest in battlefield technology to our frontline soldiers, but also invests in the British defence industry, sustaining more than 500 jobs across the UK.”