Hunt saboteurs filmed the footage in Oxhill, Warks., on Janurary 15 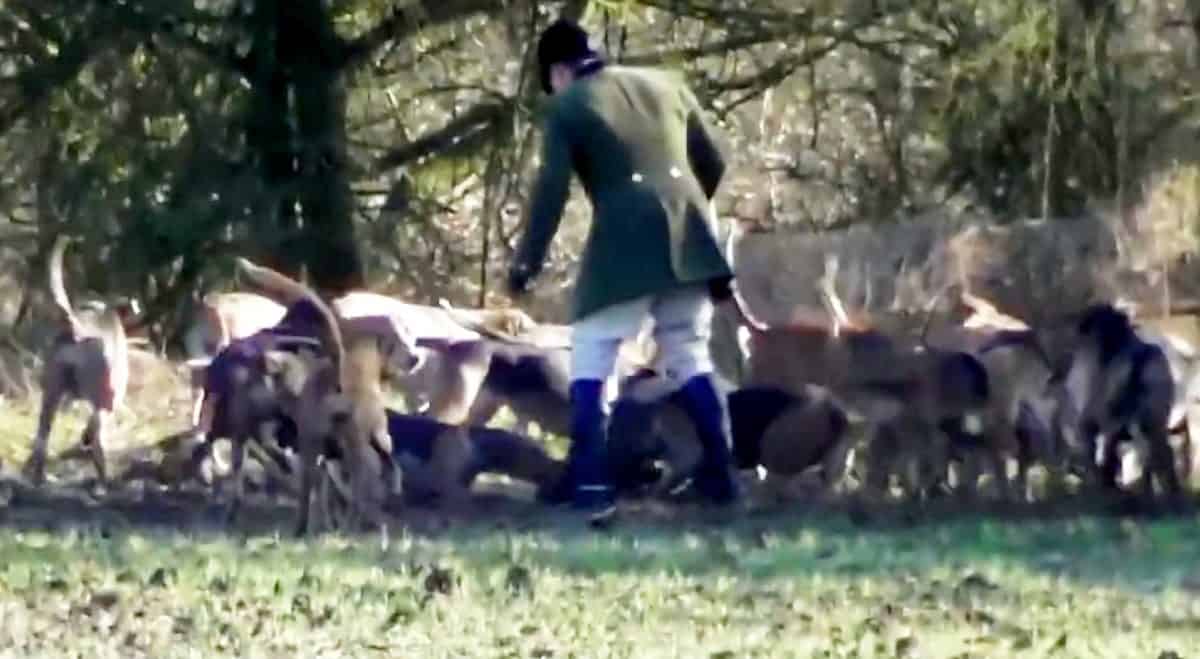 Shocking footage appears to show a fox being savaged to death by a pack of crazed hounds during a hunt.

Members of the Warwickshire Hunt were recorded by saboteurs allegedly using their dogs to kill the animal in Oxhill, Warks., on Wednesday (15/1).

The disturbing video seems to show a pack of around 15 hounds swarming around the fox before a hunter wades in with his whip to move the dogs away.

He can then be seen stepping on the body of the animal as one of the hounds goes back and attempts to drag the body out from under his boot.

West Midlands Hunt Saboteurs said the group hunted a further “six or seven” foxes throughout the day and claimed some of their own members were physically assaulted.

A spokesperson for the saboteurs said: “The first thing we saw when we arrived at the hunt was a fox running for its life across the road away from the hunt.

“The Warwickshire Hunt were ruthless and relentless in their hunting all day. In total there must have been six or seven foxes hunted throughout the day.

“At this time of year foxes are pairing up and mating so when they are hunted there are quite often two of them about together.

“Unfortunately one of those foxes was killed by the Warwickshire Hunt near Oxhill.

“We tried to get into the field to try to save the fox however we were assaulted and physically prevented from getting into the field by the Warwickshire Hunt stewards who wear pink high-viz.

“One sab managed to run into the field only to be attacked and taken to the ground by one member of the hunt.

“We faced extreme provocation all day from members of the hunt, especially as the fox was being killed.

“The Warwickshire Hunt swiftly moved on to the next fox and within minutes was hunting another one.

“They hunted into the darkness and ended the day hunting on a blind bend on the busy A422 on Edgehill.

“The huntsman then recklessly started blowing his horn on the road and caused the hounds to spill out all over the road and across to the other side.

“This was on a blind bend of a busy road as the light was fading. Hunting foxes is clearly more important than the safety of the hounds and horses.

“The fact that we were physically blocked from helping the fox speaks volumes.

“Most compassionate animal loving people would go out of their way to help any animal in distress, instead the Warwickshire Hunt not only stopped us getting to the fox but also attacked us and violently brought one of our group to the ground.

“This disgusting behaviour is completely unacceptable and extremely concerning.

“There has been a noticeable escalation in both blatant hunting and violence towards saboteurs at all of the hunts we have been to in recent weeks and this is deeply worrying.

“The Warwickshire Hunt sees the countryside as their own personal playground and clearly does not see the Hunting Act with its many loopholes as a deterrent.

“The Hunting Act needs to be strengthened and all forms of hunting completely banned.

“Unfortunately we had to witness our wildlife being hunted and a fox lost its life because of the actions of the Warwickshire Hunt.”

A Warwickshire Hunt spokesperson said: “If the WMHS have footage from their constant recording that shows the hunt doing anything illegal then we would expect them to go to the police rather than the media.

“However we are certainly concerned about the levels of violence being aimed at the hunt by the WMHS.

“These saboteurs are dangerous, aggressive people who daily abuse and attack those undertaking a legal activity.”