by Nathan Pynn
in Environment, News 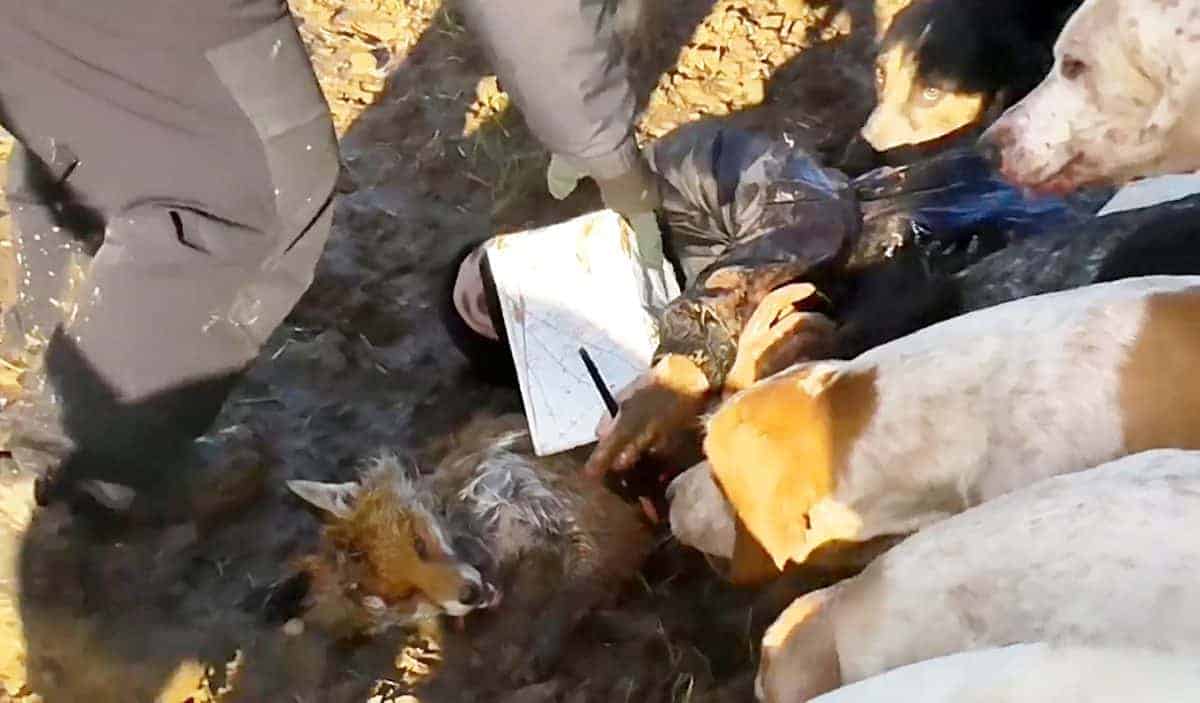 Prince Charles’ former hunt has come under fire after harrowing footage emerged of activists desperately trying to save a fox before it was ripped apart by crazed hounds.

The shocking incident was said to have occurred shortly after the Quorn Hunt had just set out on their chase from Nether Broughton, Leics., at 11.30am on Monday (9/12).

Disturbing video shows a pack of hunting hounds seemingly ripping apart the wild fox as the group of screaming hunt saboteurs try to save the stricken animal.

In the clip, a demonstrator asks a rider if he is ashamed over what has happened, to which he simply shrugs and replies: “Accidents happen.”

One of the activists can then be seen cradling the dead animal in her arms as members of the prestigious hunt ride away from the scene.

Nottingham Hunt Saboteurs posted the clip on Facebook, which drew widespread criticism after being viewed and shared over 12,500 times.

A spokesperson for the group said: “They just blatantly didn’t care.

“It’s just really sickening the callousness with which they dealt with it and then they carried on hunting afterwards.

“They weren’t sorry. One of them on the video claimed it was an accident, but it was just a tokenistic thing.

“They were out there to hunt the foxes and they achieved what they set out to do. If it wasn’t for us being present, no one would even know that they’ve done it.

“This is what they do every day. The Quorn Hunt go out three or four times a week. They’re trying to hunt and kill foxes.

“After 15 minutes, the hounds picked up the scent of a fox and chased it and killed it really quickly.

“We had a group of ours who were close by who ran down to try and stop it. They saw the hounds chase and get the fox and they tried to get down there to help it.

“They jumped into the pack of hounds and they got the foxes body but it had already been killed at that point.

“It is one of Prince Charles’ favourite hunts. The Quorn Hunt is one of the biggest and most prestigious hunts in the world.”

Fox hunting with dogs was banned in 2004, forbidding the use of dogs to hunt foxes and other wild mammals in England and Wales.

The Prince of Wales famously lobbied against the ban, writing directly to then Prime Minister Tony Blair expressing his love of hunting, and was reportedly furious when it was passed.

The Nottingham Hunt Saboteurs claim that Leicestershire Police were not properly enforcing the law.

The spokesperson added: “The police don’t seem to want to do anything about this.

“We don’t even deal with Leicestershire Police anymore because they’re so biased towards the hunt.

“It will be us that will try to stop it. We will always keep going. We will keep sabbing them and we hope they will not let them get their own way.

“It would be nice if the Labour Government get in as we believe that they’ll do something about it when they see it.

“The reality is these are the wealthy minority who are allowed to do whatever they want.”

“Animals do this with animals to survive. Humans do this out of enjoyment.”

Another commenter, Gloria Jenkins, said: “Unbearably cruel. So sorry Sabs, that you have to witness this. So proud of your courage, to be there and fight for them.”

Louise Martin also said: “What a dreadful thing to do to an animal, it must have suffered such terror in its last moments.

“How anyone can think this is a ‘sport’ is beyond my comprehension. Vile, vile people.”