The US president arrived in Scotland on Friday evening after completing his two-day "working trip". Mr Trump, whose mother was Scottish, and his wife Melania are spending the weekend at his Turnberry hotel. 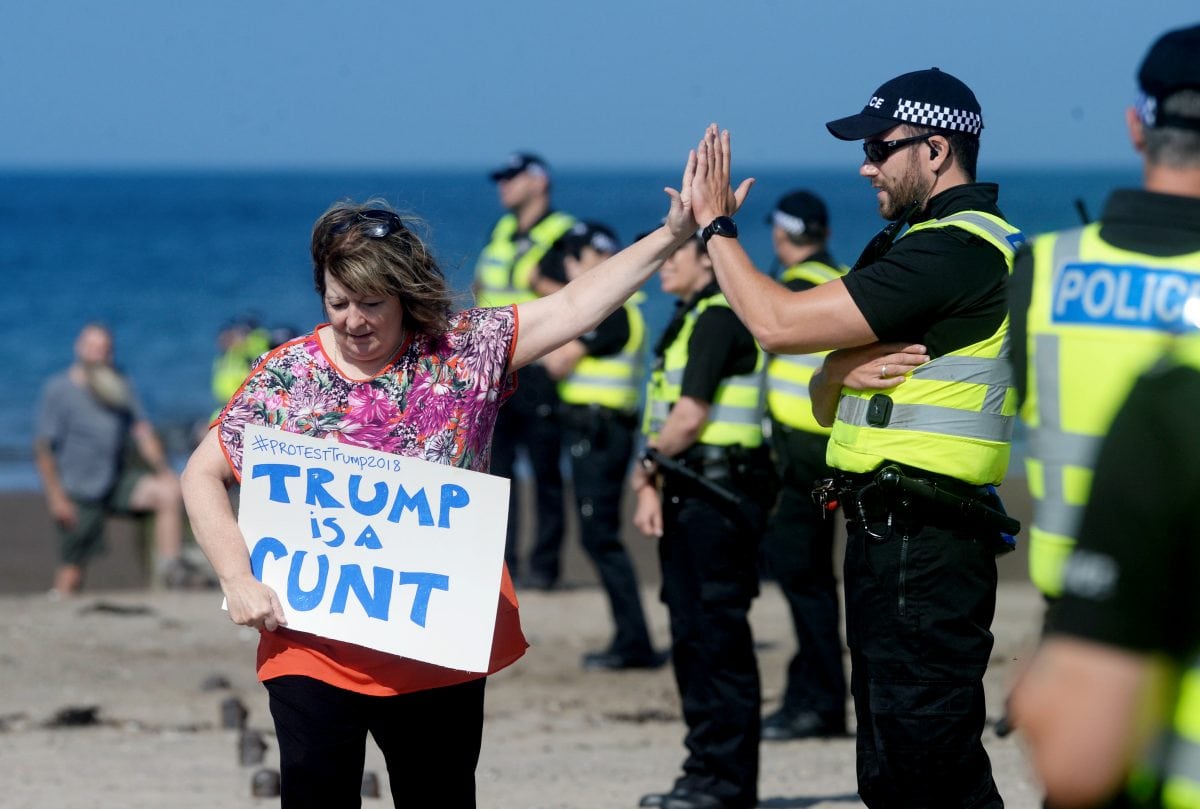 After hundreds of thousands thronged the streets of London to demonstrate against President Donald Trump, more demonstrators turned up to greet the President of the United States as he arrived in Scotland and teed off a game of golf at his Turnberry resort.

#BREAKING President Donald Trump waving a protestors who are calling him racist as he plays golf at #Turnberry @realDonaldTrump #TrumpProtests #TrumpVisitsUK #trump pic.twitter.com/aZFmqFzkzX

Trump had avoided the capital where scenes of demonstartions against him included the iconic Baby Trump inflatable blimp, due to make another appearance in Scotland too.

Instead he met the Queen at Windsor and Prime Minister Theresa May at her Chequers country retreat where last weekend she had claimed to have found cabinet unity for her Brexit plan.

After a week of cabinet resignations followed including Foreign Secretary Boris Johnson, Trump undermined a beleaguered Theresa May by telling The Sun, a newspaper owned by his confidante Rupert Murdoch, that a US- UK trade deal would be jeopardized by her Brexit plan.

He further interfered in British politics by saying that his “friend” Boris Johnson would make a good Prime Minister. 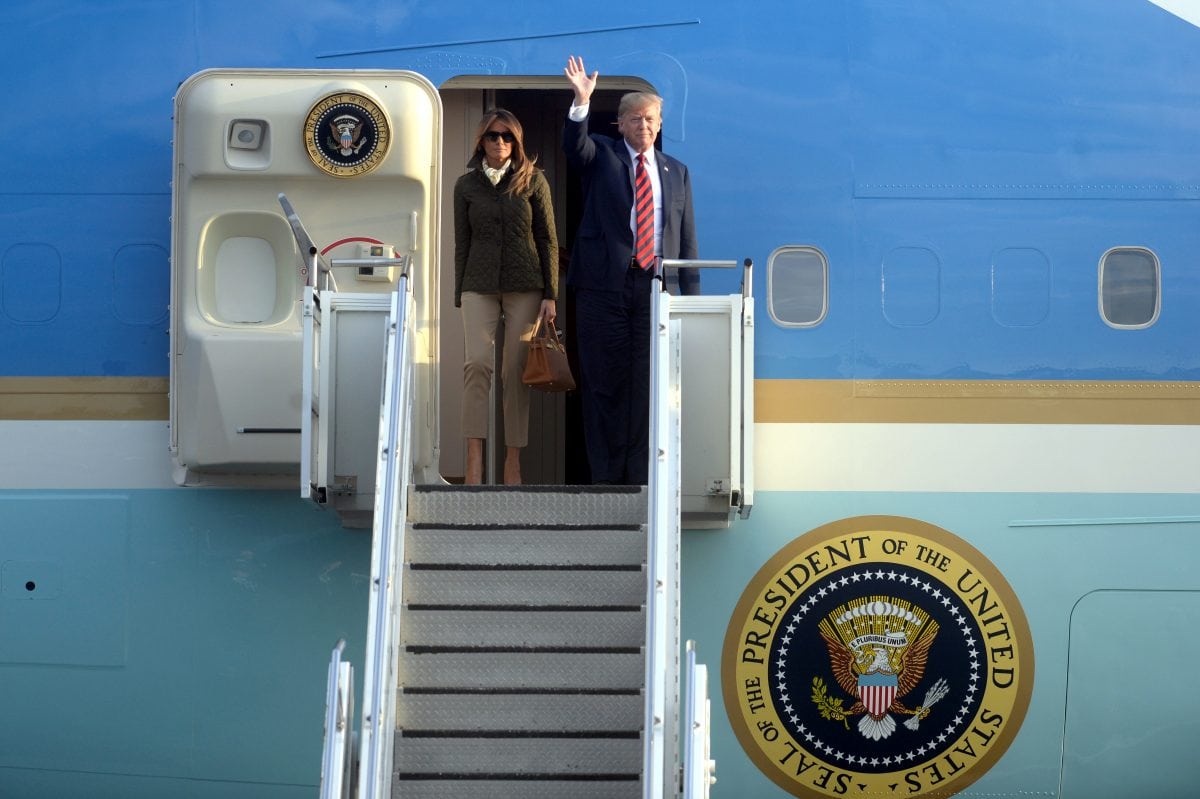 However after meeting Theresa May, the President quickly backtracked on his interview, insisting that a US-UK trade deal was on the cards.

As the President arrived for a private round of golf at his Scottish golf resort, before he flies to Helsinki to meet Vladimir Putin, demonstrators gathered outside the resort, as well as in Edinburgh for another day of protests.

Lines of police rand snipers ringed Turnberry, where Donald Trump, whose mother was Scottish – and members of his family are spending the weekend.

As Trump arrived on Friday evening, a paragliding protester breached a no-fly zone, with a banner reading: “Trump: well below par #resist”. 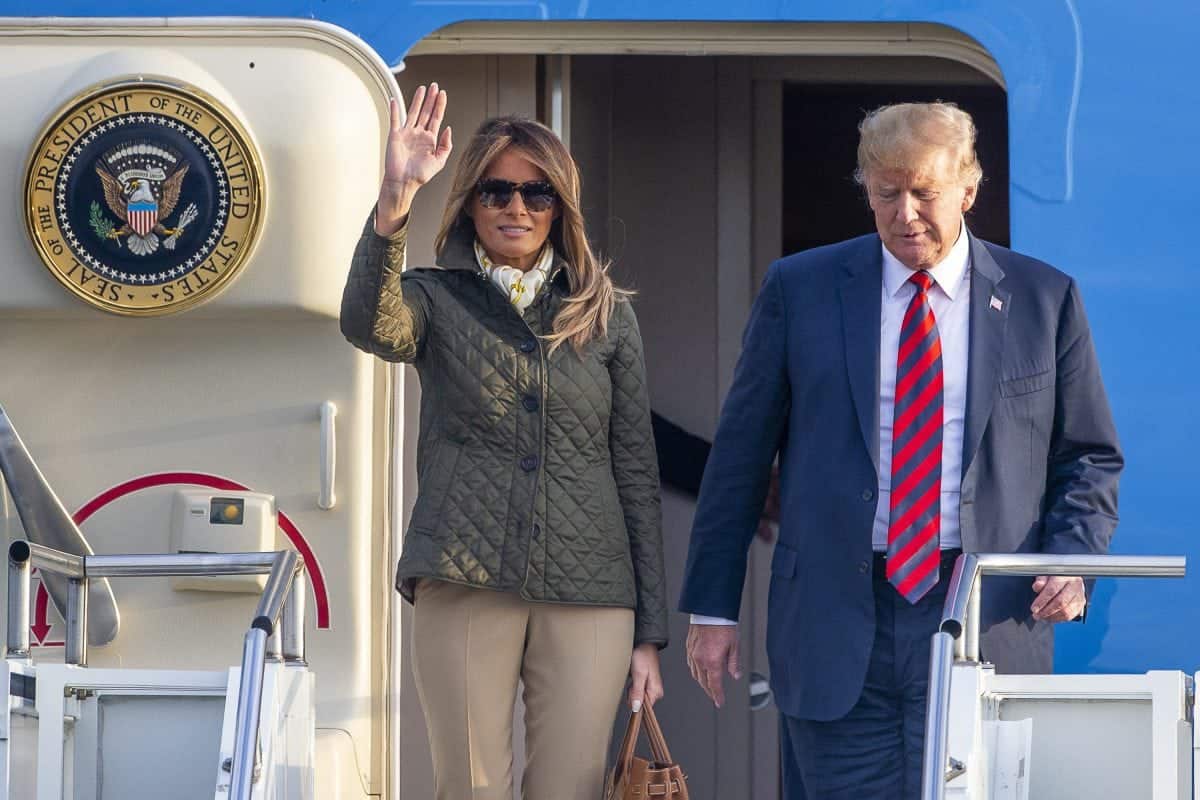 The stunt was reportedly staged by Greenpeace.

Ben Stewart, a spokesman told the BBC: “It wasn’t dangerous at all. We let the police know about 10 or 15 minutes before that we were coming in.

How do you deliver a message to someone who doesn't want to listen? #Resist #StopTrump pic.twitter.com/5Vb1w1XBfI

“We phoned them, we had someone on the police line who informed them. We thought it was important that the president actually saw a real-life protester.

“There’s tens, maybe hundreds of thousands of people on the streets around the UK.”

The Trump Baby blimp was banned from appearing near the resort that Donald Trump bought in 2014, but is set to make another appearance in Edinburgh where thousands of demosntrators are gathering. 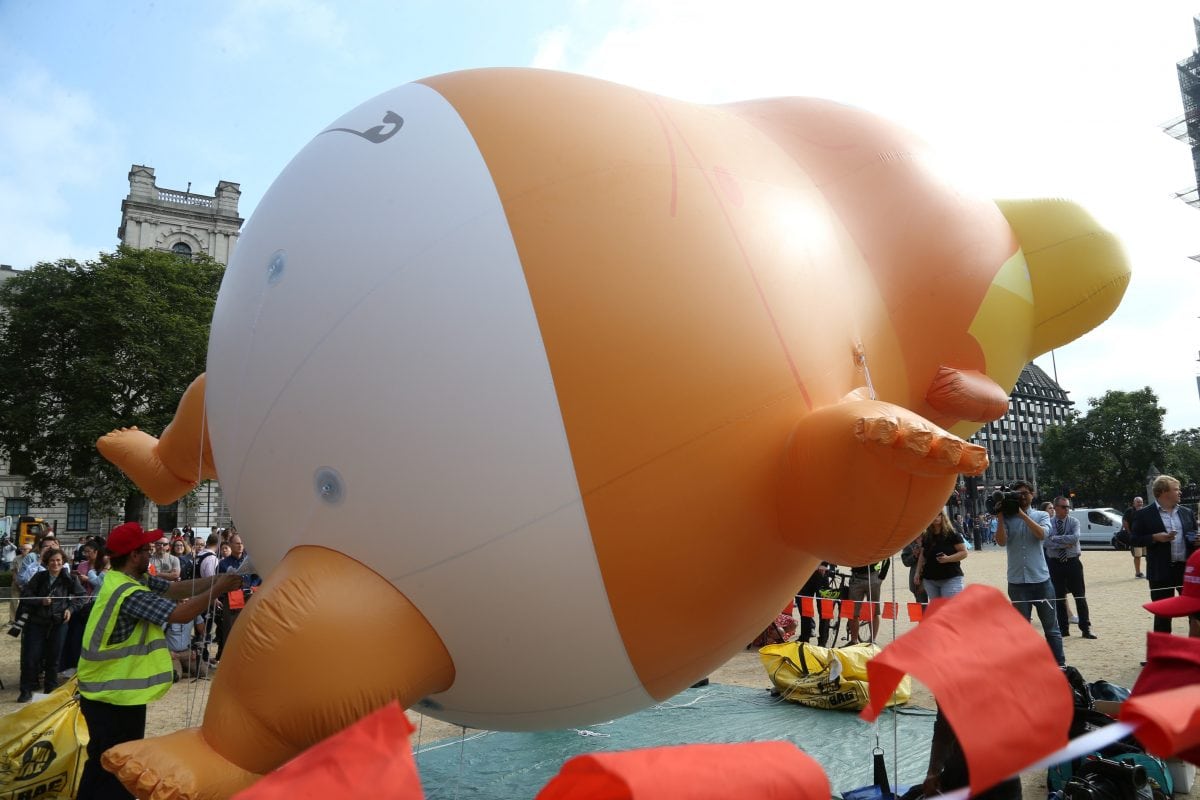 Mundell said: “It’s extremely important that we welcome the person who is the head of state if he United States and duly elected president.

“He is the head of the government of our most important ally, most important trading partner here in Scotland and those huge cultural and tourism links we have. 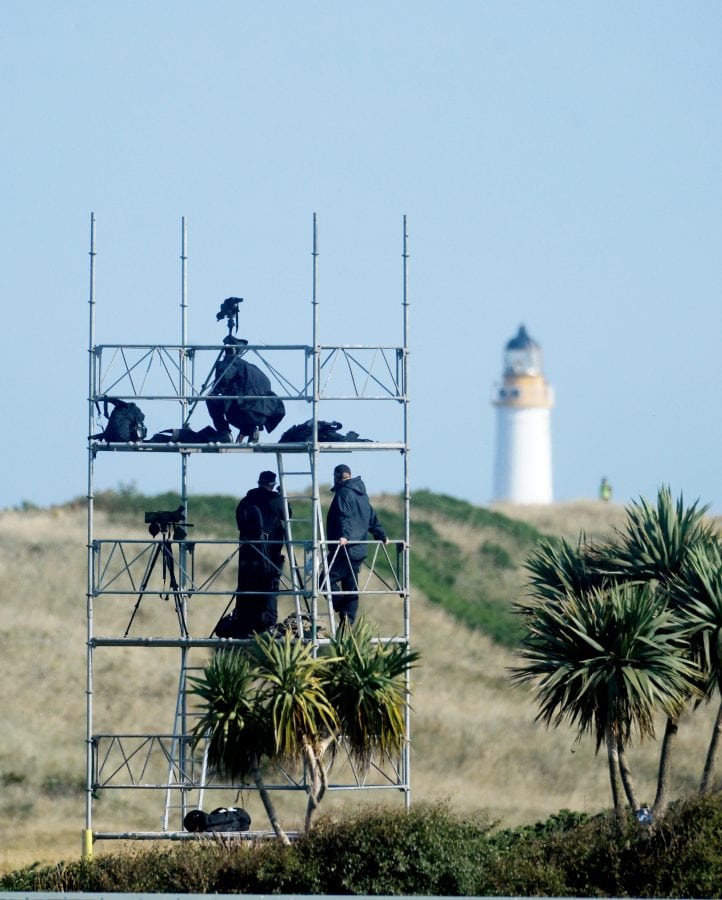 “I think it’s very important we offer the person in that office the appropriate welcome to Scotland and I think we’ve done that.

“Obviously there are security issues that have to be addressed and that’s why we have a significant number of police around this visit.”

Regarding the policing and security costs of the visit, which are set to cost Scotland £5m, he said: “Unfortunately these days there’s always going to be this very high degree of security required and that comes at a cost. 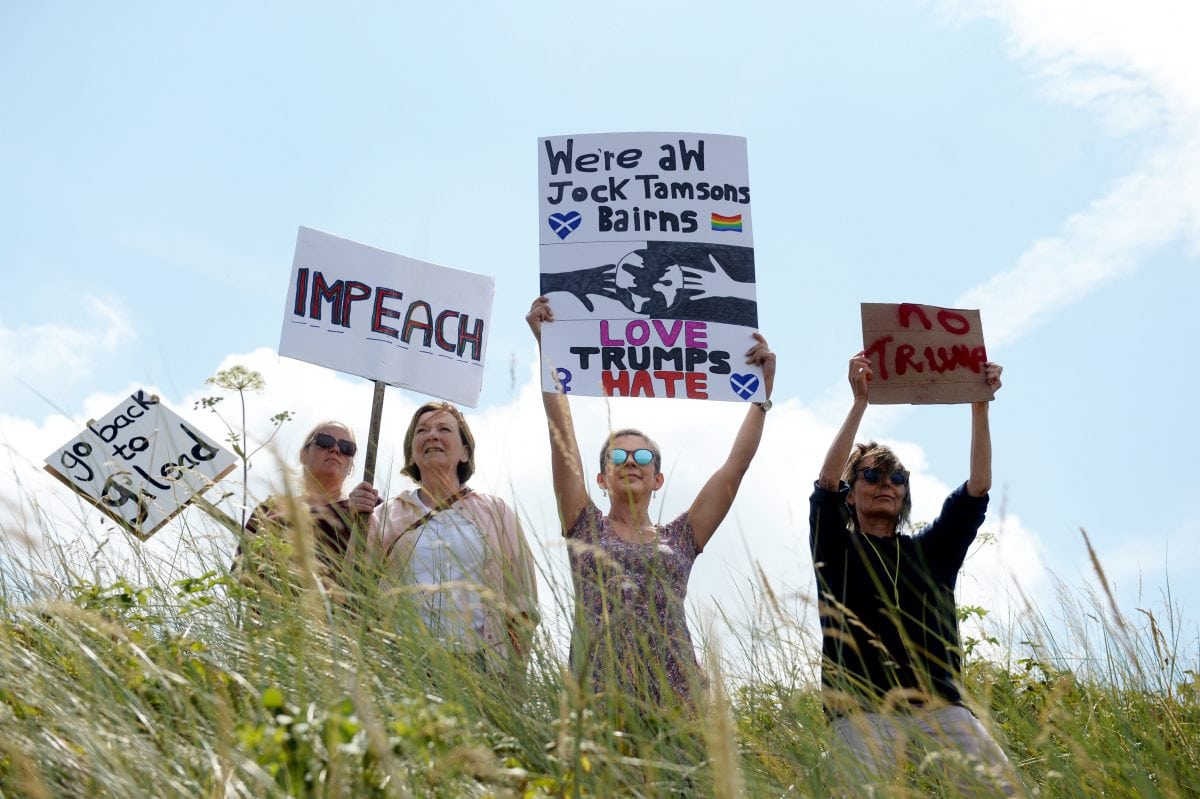 “Our relationship with the United States is really important and I’m sure this will be a productive visit.”

The full costs of policing the visit have been estimated at around £30 million.

Discussing First Minister Nicola Sturgeon’s absence and whether she was invited, he said: “The arrangements were made by the United States government and as far as I’m aware they did not invite the first minister.” 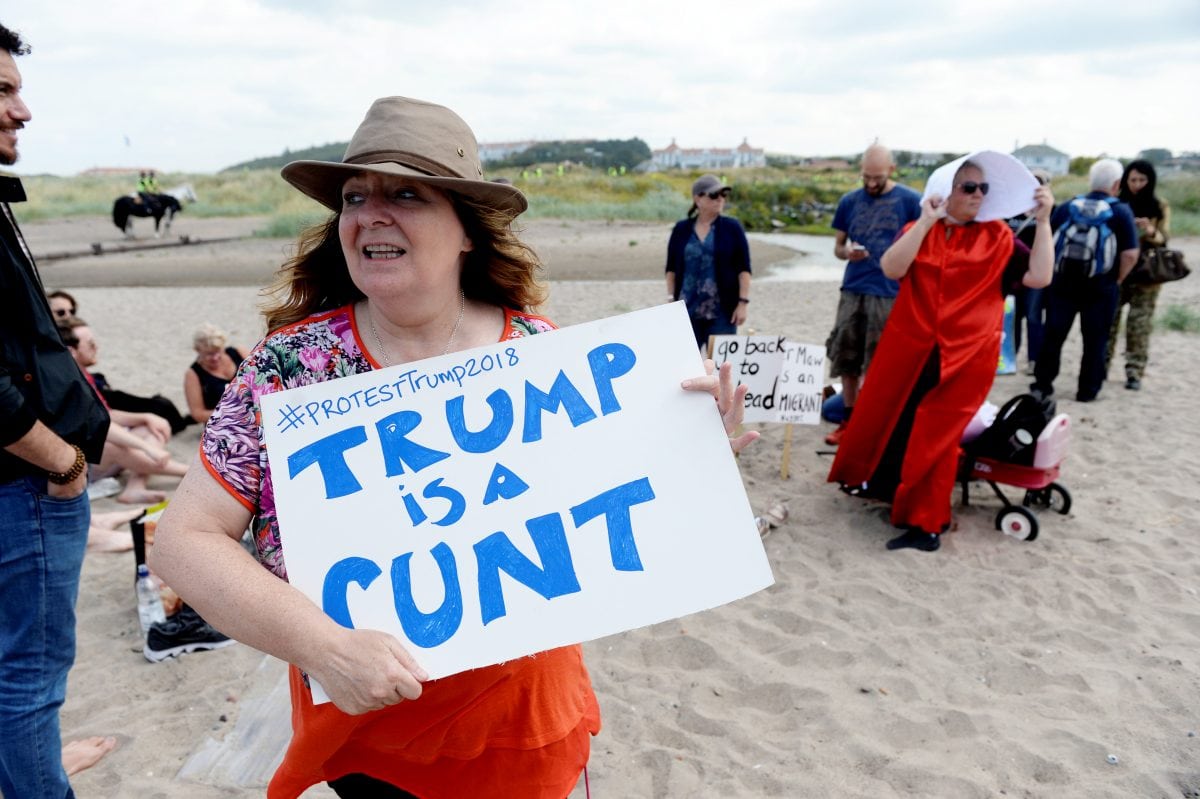 “All these things are important to Scotland and it’s important we have the appropriate relationship with the United States of America.

“I’m very happy to have welcomed him.” 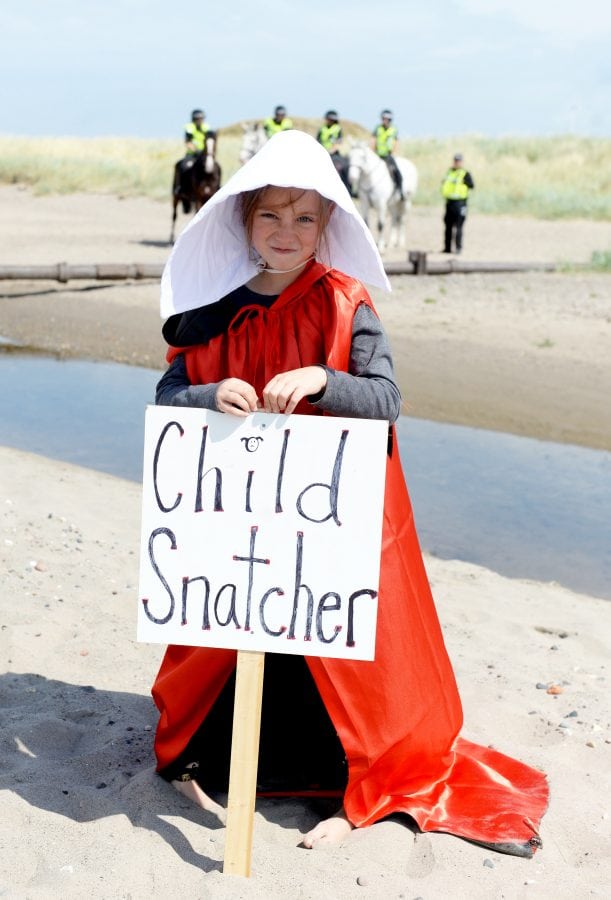 Commenting on Trump’s heated comments regarding Britain and the EU, Mundell added: “I think he’s clarified what his position is in relation to Brexit and I think what he’s confirmed today is that it will be possible for the UK and the US to have a free-trade deal when Britain leaves the EU.

“I think that’s a very important thing and something to be welcomed.” 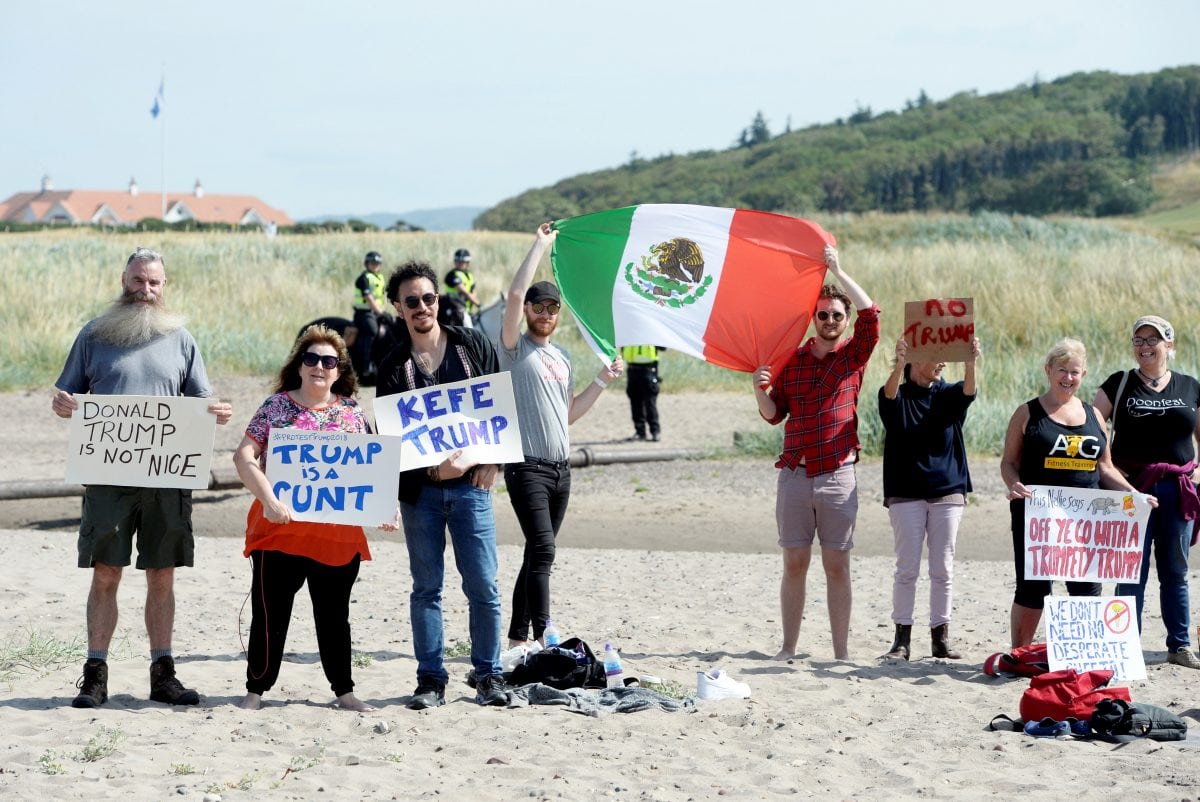 Acknowledging the protests and public demonstrations that are set to take place in Edinburgh and Glasgow this weekend, Mr Mundell added: “We have an open democracy here and people are entitled to say and convey whatever message they want.

“That’s the great thing about our country. It’s an open democracy and everybody’s entitled to have their say.

“But I believe we give a formal welcome to the head of the United States whoever that person is and whether or not we agree with their views or policies.”