Phosphorous, a mineral essential for human DNA and other cell processes, arrived on comets - more than four billion years ago. 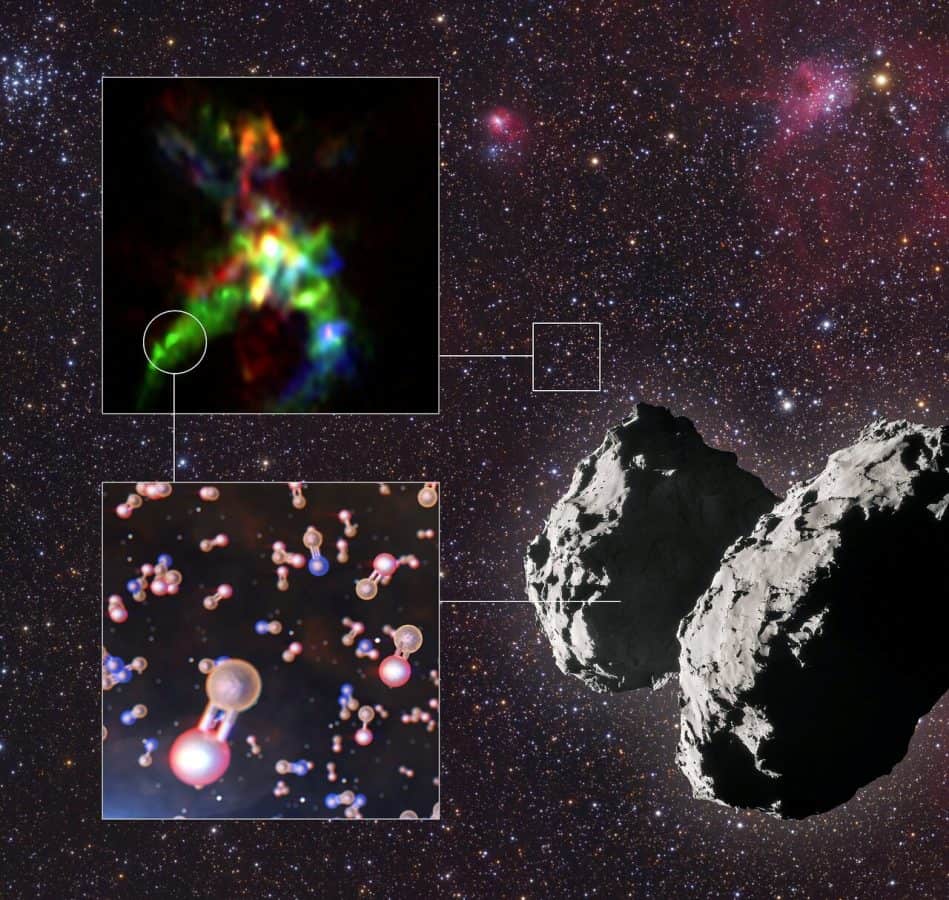 Life on Earth came from deep space, according to new research.

Phosphorous, a mineral essential for human DNA and other cell processes, arrived on comets – more than four billion years ago.

Its interstellar journey from star-forming regions billions of light years away has been tracked by astronomers for the first time.

It showed the key building block formed in cloud-like regions of gas and dust between stars and was then carried to our planet – to kick-start life.

Lead author Dr Victor Rivilla, of the Italian Institute of Astrophysics, said: “Life appeared on Earth about four billion years ago, but we still do not know the processes that made it possible.”

Phosphorus is used in the body to make the chemical phosphate – vital to cell membranes, muscles, nerves and bones. It also forms the backbone of DNA.

Traces were found on the comet 67P/Churyumov-Gerasimenko after Rosetta famously landed the British made instrument Philae in 2014.

Using ALMA, the international team could pinpoint where phosphorus-bearing molecules were born in vast star nurseries – such as a region called AFGL 5142.

This is in the constellation of Auriga – 3 billion light years from Earth. A host of phosphorus-bearing molecules were found there.

These include phosphorous monoxide – the most common – and phosphorus nitride, said Dr Rivilla.

Using data from the ROSINA instrument on board ESA’s Rosetta, the researchers also discovered phosphorus monoxide on the comet 67P/Churyumov-Gerasimenko.

Dr Rivilla said: “The combination of the ALMA and ROSINA data has revealed a sort of chemical thread during the whole process of star formation, in which phosphorus monoxide plays the dominant role.”

The ALMA observations showed that phosphorus-bearing molecules are created as massive stars are formed.

Flows of gas from young massive stars open up cavities in interstellar clouds. Molecules containing phosphorus form on the cavity walls, through the combined action of shocks and radiation from the infant star.

The astronomers have also shown that phosphorus monoxide is the most abundant phosphorus-bearing molecule in the cavity walls.

Co-author Dr Kathrin Altwegg, principal investigator for Rosina, said: “Phosphorus is essential for life as we know it.

“As comets most probably delivered large amounts of organic compounds to the Earth, the phosphorus monoxide found in comet 67P may strengthen the link between comets and life on Earth.”

Professor Leonardo Testi, ESO astronomer and ALMA European Operations Manager, said: “:Understanding our cosmic origins, including how common the chemical conditions favourable for the emergence of life are, is a major topic of modern astrophysics.

“While ESO and ALMA focus on the observations of molecules in distant young planetary systems, the direct exploration of the chemical inventory within our Solar System is made possible by ESA missions, like Rosetta.

“The synergy between world leading ground-based and space facilities, through the collaboration between ESO and ESA, is a powerful asset for European researchers and enables transformational discoveries like the one reported in this paper.”