A rare high-rise restaurant where the food isn’t a mere afterthought. 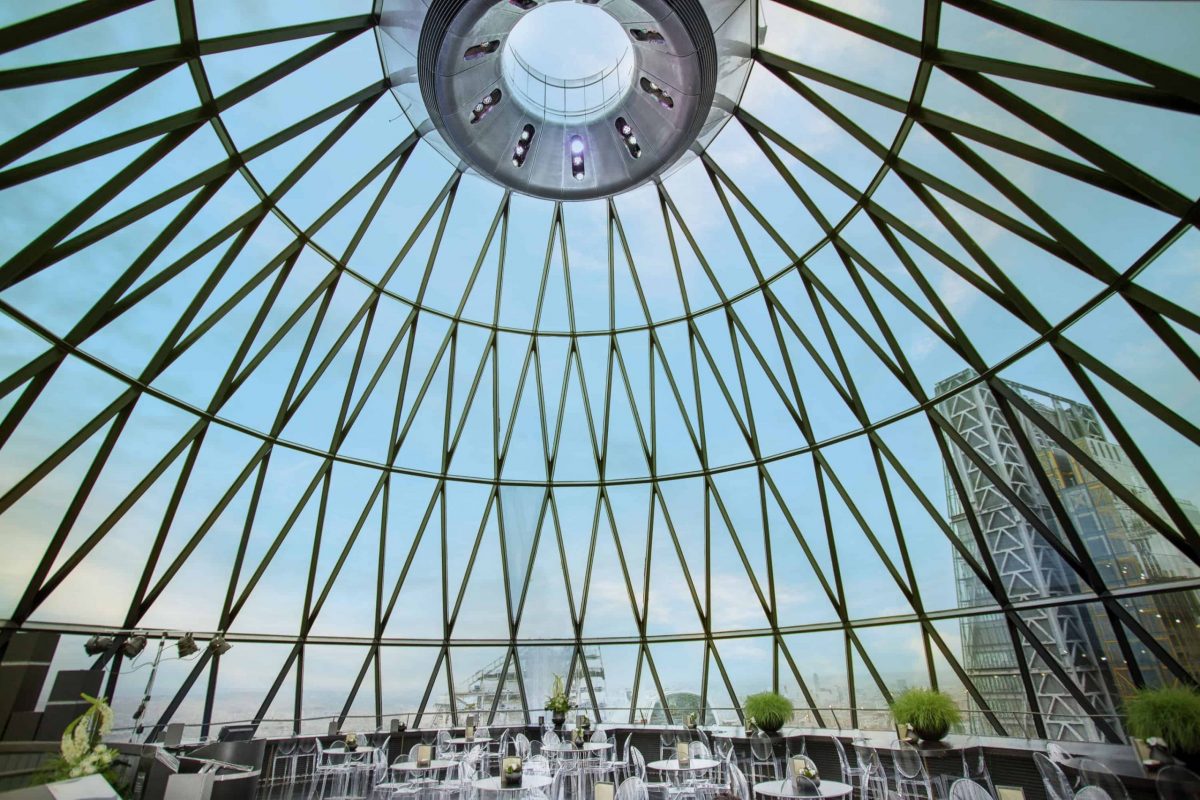 High-rise restaurants are often a safe bet when asked for restaurant recommendations where the food isn’t really the point. A place to impress date or relatives, when money isn’t really an option. After all, most sky-high venues offer a generally striking experience, even though the food is all too often mediocre at best and gratuitously overpriced, with the panoramic views often used as an excuse for laziness amongst chefs and restaurateurs. There are a few exceptions to the rule, yet they’re astonishingly scarce.

Occupying the top two floors of Norman Foster’s 30 St Mary Axe (‘The Gherkin’), Helix and its accompanying bar, Iris, opened in the summer of 2018. One of London’s most recognisable skyscrapers, The Gherkin was the building that initially revolutionised the changing landscape of the new City of London skyline, completed in 2003. Operated by Searcys  (the champagne bar with outposts in unusual places from Kenwood House to Blenheim Palace, to Westfield Stratford), the building’s restaurant space has been operating for quite some time, but was only used for private events and the occasional pop-up, most recently an exclusive members’ club.

Accessible via two lifts, past the strict security screening (arrive with at least fifteen minutes to spare before lunch or dinner, with bookings essential to access the building), Helix is named after the helix shape which of the pinnacle of the building, while Iris – on the 40th floor – offers a 360-degree panoramic view across the city, named for the iris shape formed from the building’s overhead view, specifically designed to reflect the Gherkin’s place as the eye over the city.

Past the dark lobby, the view from the floor-to-ceiling windows comes as an initial surprise. A pleasant one, no less. Consequently, the décor is somewhat muted, never detracting from the views over the skyline: impressive even during a wet winter’s day. A contemporary palette of black and silver dominates, with canteen-style chairs and a refreshing lack of table cloths. Linen aside, service is particularly polished, as is typical of the fine dining setting: professional yet unstuffy. Named after clouds (Alto, Cirrus, Stratus, Cumulus and Nimbus), five private dining rooms are also on standby, open for daytime functions.

As for the food, Helix’s menu is a proud celebration of British produce, showcasing some of the best ingredients Britain has on offer, with a particular focus on seasonality and sustainability. Alongside the a la carte menu, tasting menu and Sunday brunch, a set menu offers three courses and a drink for £35 at lunch or £40 during dinner service.

From the a la carte menu, a recent lunch began with a dish of dressed Lyme Bay crab, elegantly whipped into a mound with some mild dressing, not to detract from the carapace’s profound depth of flavour. A simple, well-executed celebration of quality produce. Wedges of baked squash, on the other hand, were served with the skin on, adding textural depth alongside assists from candied walnuts and pumpkin seeds, supplemented with some rocket, whose bitterness brought balance, contrasting the squash’s natural sweetness.

Similar understanding of balance was demonstrated with a well-cooked tranche of farmed Devon stone bass, amplified by a suggestion of fennel and a school of Morecambe Bay brown shrimp. Even better was a hunk of coley with wilted rainbow chard: the jewel in the dish’s crown being the fistful of cockles and cider sauce. To finish, various desserts are available, alongside a selection of impressive British cheeses with condiments and seeded crackers.

Is the food served at Helix some of the best in the city? Not necessarily, but it’s a rare high-rise restaurant where the food isn’t a mere afterthought, and the overall experience is second-to-none.

Need help with you CV? Check out this interactive guide