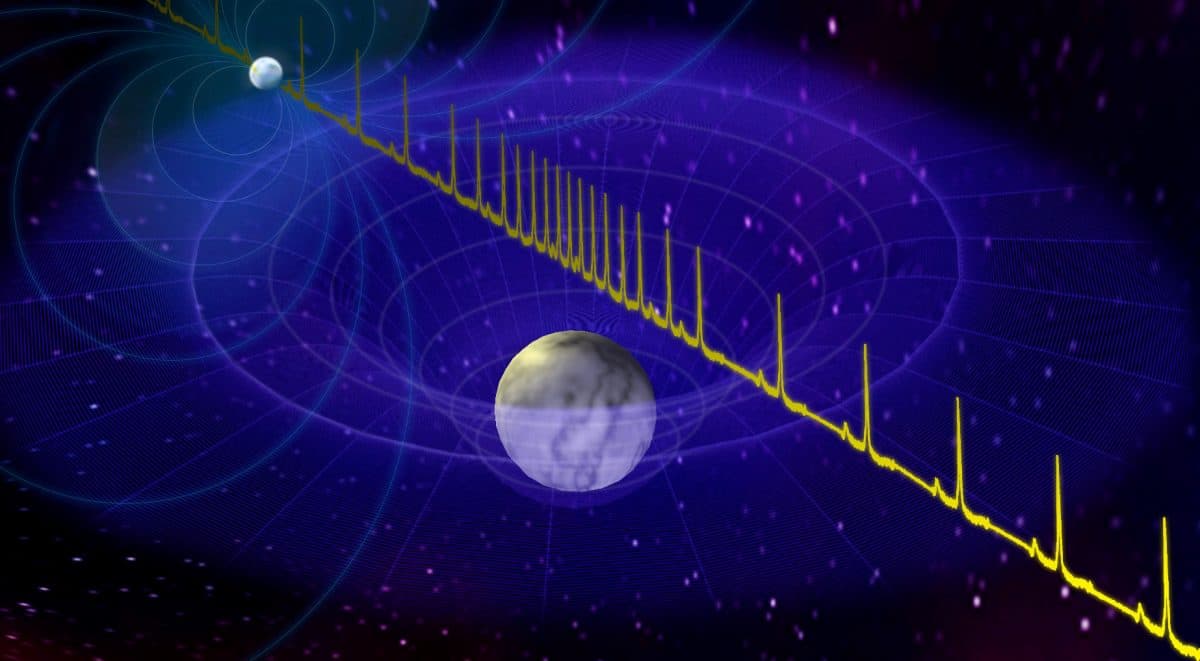 Despite being only about 15 miles across the star is so tightly crushed its weight is unimaginable.

It’s known as a neutron star – the compressed remains of a supernova. They’re created when giant stars collapse in a massive explosion.

The protons and electrons melt into each other to form neutrons. A single sugar-cube would weigh 100 million tons – the same as the entire human population.

It’s “the most massive neutron star ever detected – almost too massive to exist”, say the US team.

The measurement approaches the limits of how huge and compact a single object can become – without crushing itself down into a black hole.

It was detected about 4,600 light-years from Earth. One light-year is about six trillion miles.

Principal author Thankful Cromartie, a pre-doctoral fellow at Virginia University, said the discovery has wide ranging implications for our understanding of physics.

She said: “Neutron stars are as mysterious as they are fascinating. These city-sized objects are essentially ginormous atomic nuclei.

“They are so massive their interiors take on weird properties. Finding the maximum mass physics and nature will allow can teach us a great deal about this otherwise inaccessible realm in astrophysics.”

Neutron stars are the burnt-out cores of dead stars. A handful of material would weigh as much as Mount Everest.

They are the most hostile known environments with temperatures of a million degrees. They are highly radioactive and have incredibly intense magnetic fields.

Their extreme density makes them an ideal natural lab for studying some of the most exotic states of matter.

The neutron star is a pulsar which emits beams of radio waves like a lighthouse as it spins.

Scientists used an effect of Einstein’s theory of relativity to measure its mass and that of its orbiting companion, a white dwarf star.

“This neutron star is twice as massive as our Sun,” said Paul Demorest, from the National Radio Astronomy Observatory (NRAO), in Charlottesville, Virginia.

“This is surprising and that much mass means that several theoretical models for the internal composition of neutron stars now are ruled out.

“This mass measurement also has implications for our understanding of all matter at extremely high densities and many details of nuclear physics.”

The neutron star described in Nature Astronomy is a pulsar – emitting beams of radio waves like a lighthouse as it spins.

It was identified by the Green Bank Telescope (GBT) in West Virginia – so sensitive it can pick up radio waves emitted milliseconds after the birth of the universe.

The researchers used an effect of Einstein’s theory of relativity to calculate its mass thanks to an orbiting companion star.

As the white dwarf passes directly in front of the pulsar this causing a delay for the time the radio waves take to reach earth.

The delay – called the Shapiro Effect – is caused by gravity enabling the mass of both stars to be precisely measured.

“Neutron stars have this tipping point where their interior densities get so extreme that the force of gravity overwhelms even the ability of neutrons to resist further collapse.

“Each ‘most massive’ neutron star we find brings us closer to identifying that tipping point and helping us to understand the physics of matter at these mind-boggling densities.”

While astronomers and physicists have studied these objects for decades many questions remain about the nature of their interiors.

It’s not known if the crushed neutrons become “superfluid” or break down into a soup of subatomic quarks or other exotic particles.

The tipping point at which gravity wins out over matter and forms a black hole is also yet to be worked out.

“We don’t know what they’re made of and one really important question is, ‘How massive can you make one of these stars?’

“It has implications for very exotic material that we simply can’t create in a laboratory on Earth.”

Pulsars get their name because of the twin beams of radio waves they emit from their magnetic poles.

These beams sweep across space in a lighthouse-like fashion. Some rotate hundreds of times each second.

Since pulsars spin with such phenomenal speed and regularity, astronomers can use them as the cosmic equivalent of atomic clocks.

Such precise timekeeping helps astronomers study the nature of spacetime, measure the masses of stellar objects and improve their understanding of general relativity.