The regular seismic events means there are active volcanoes with liquid magma and even water, say scientists, creating an environment for organisms to thrive 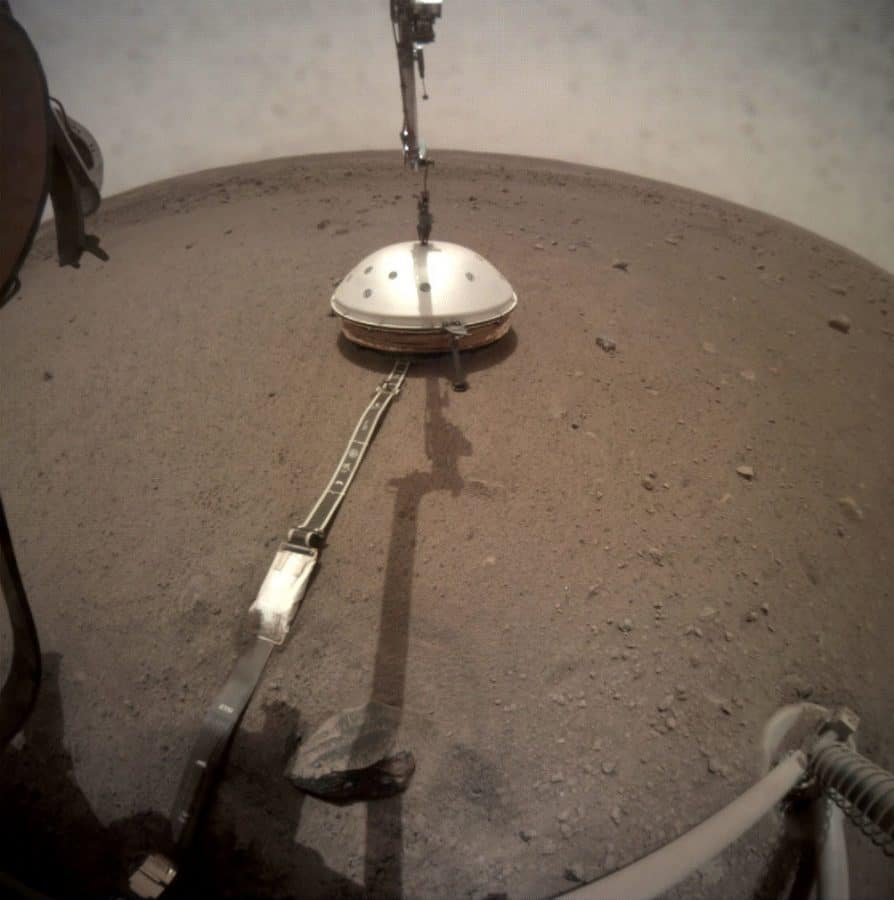 Earthquakes have been detected on Mars for the first time – suggesting the Red Planet could be harbouring life.

The regular seismic events means there are active volcanoes with liquid magma and even water, say scientists, creating an environment for organisms to thrive.

They register up to 4 on the Richter scale – similar to the scale of tremors that hit San Francisco last year knocking books off shelves and waking people up.

An analysis of data from NASA’s InSight lander identified 174 ‘Marsquakes’ in only 235 Martian days – which are about 37 minutes longer than those on Earth.

Co-author Dr Nicholas Schmerr, an Assistant Professor of geology at Maryland University, said: ” Life exists at the edge, where the equilibrium is off.

“Think of areas on Earth such as the thermal vents at the deep ocean ridges where chemistry provides the energy for life rather than the sun.

“If it turns out there is liquid magma on Mars – and if we can pinpoint where the planet is most geologically active – it might guide future missions searching for the potential for life.”

The heat could melt pockets of the planet’s subterranean ice – perhaps forming reservoirs of water where there is life as we know it.

The robot has been listening for faint rumbles beneath the surface since December 2018 when it placed its seismometer down to begin the groundbreaking mission.

It touched down in a small crater named Homestead hollow in a region known as Elysium Planitia in the northern hemoisphere.

The seismometer allows scientists to peer into the Martian interior by studying ground motion – or ‘marsquakes’.

Preliminary results of the first recordings are reported in a series of seven paper published in the journals Nature Geoscience and Nature Communications.

They cover the first 10 months up to September 30 last year. Two dozen had a magnitude of 3 to 4 – and came from distant sources.

The location of two were pinpointed to the Cerberus Fossae area – which shows evidence of “recent volcanic and tectonic activity”, say the researchers.

On Earth this would be unlikely to damage buildings – but be enough to feel the ground shake and even topple things off cupboards.

Co-author Prof Vedran Lekic, from the same Maryland lab, said: “These low-frequency events were really exciting, because we know how to analyse them and extract information about sub-surface structure.

“Based on how the different waves propagate through the crust, we can identify geologic layers within the planet and determine the distance and location to the source of the quakes.”

The other 150 produced smaller ground shaking similar to that recorded on the Moon by the Apollo program in the late 1960s and 70s.

Prof Schmerr said: “This is the first mission focused on taking direct geophysical measurements of any planet besides Earth, and it’s given us our first real understanding of Mars’ interior structure and geological processes.

“These data are helping us understand how the planet works, its rate of seismicity, how active it is and where it’s active.”

Each marsquake acts as a kind of flashbulb that illuminates the structure of the planet’s interior.

The first direct seismic measurements of the Martian subsurface and upper crust – the rocky outermost layer of the planet – also discovered atmospheric phenomena.

These include gravity waves and infrasound – signs of a local magnetic field at the landing site that is 10-times stronger than anticipated.

Prof Schmerr said: “Understanding these processes is part of a bigger question about the planet itself. Can it support life – or did it ever?”

Detecting signs of life was the primary mission of the earlier Mars probes, Viking 1 and Viking 2.

Each carried seismometers, but they were mounted directly on the landers and provided no useful data.

The Viking 1 instrument did not unlock properly, and Viking 2 only picked up noise from wind buffeting the lander but no convincing marsquake signals.

A robotic arm on the lander placed the SEIS seismometer directly on the Martian ground some distance away to isolate it from the lander.

The instrument is also housed in a vacuum chamber and covered by the aptly named Wind and Thermal Shield.

In addition, the seismometer provided important information about Martian weather. Low-pressure systems and swirling columns of wind and dust called dust devils lift the ground enough for the seismometer to register a tilt in the substrate.

High winds flowing across the surface of the ground also create a distinct seismic signature.

Combined with data from meteorological instruments, SEIS data help paint a picture of the daily cycles of surface activity near the InSight lander.

The researchers found the winds pick up from about midnight through early morning, as cooler air rolls down from highlands in the Southern Hemisphere onto the Elysium Planitia plains where the lander is located.

During the day, heating from the sun causes convective winds to build. Winds reach their peak in late afternoon when atmospheric pressure drops and dust devil activity occurs.

By evening, the winds die down, and conditions around the lander become quiet. From late evening until about midnight, atmospheric conditions are so quiet, the seismometer is able to detect the rumblings from deeper inside the planet.

All of the ‘marsquakes’ have been detected during these quiet periods at night, but the geologic activity likely persists throughout the day.

Prof Lekic said: “What is so spectacular about this data is that it gives us this beautifully poetic picture of what a day is actually like on another planet.”

The InSight mission is scheduled to continue collecting data until the end of the year.