Astronomers have captured an image of the most distant star ever seen – nine BILLION light years away. The star, named Icarus, is so far away that the light the boffins saw was twice as old as planet Earth. Experts at UC Berkely in California discovered the star thanks to a rare cosmic alignment, which […] 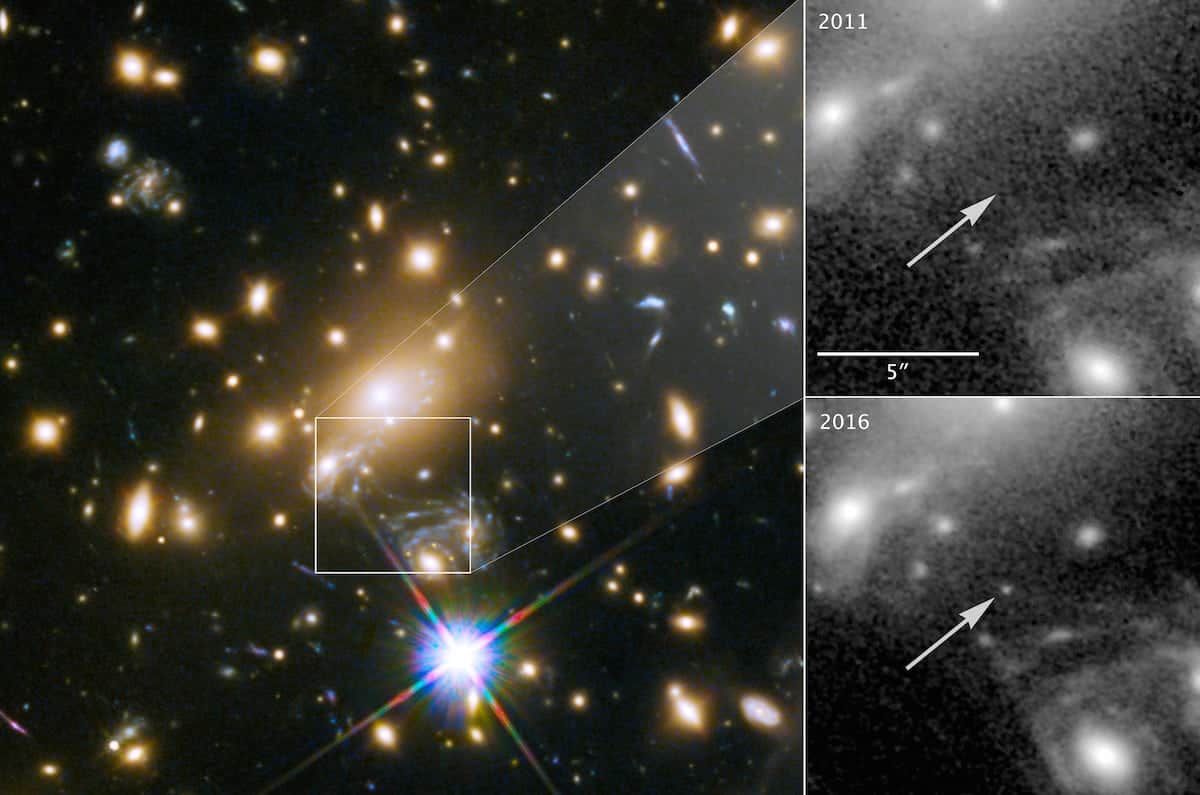 Astronomers have captured an image of the most distant star ever seen – nine BILLION light years away.

The star, named Icarus, is so far away that the light the boffins saw was twice as old as planet Earth.

Experts at UC Berkely in California discovered the star thanks to a rare cosmic alignment, which provided a window of opportunity to view the star.

The sighting was made possible due to a phenomenon called ‘gravitational lensing’, which allows far away objects to be visible.

Gravitational lensing (GL) is a rare instance where the bending of light by massive galaxy clusters that magnify a dimly lit universe.

The star, known as ‘Icarus’, was spotted over nine billion light years from earth, with one lightyear the equivalent of 93 million miles, making its light as twice as old as the earth.

GL magnifies galaxies by up to 50 times, but this time the NASA Hubble Space Telescope caught the star magnified more than 2,000 times.

By taking advantage of natural phenomena such as GL, astronomers will have a new technique to study stars in galaxies formed during the earliest days of the universe.

Study author Patrick Kelly, assistant professor from the University of Minnesota said: “You can see individual galaxies out there, but this star is at least 100 times farther away than the next individual star we can study, except for supernova explosions.

The astronomy team also used Icarus to test and reject one theory of dark matter – that it consists of numerous primordial black holes lurking inside galaxy clusters.

Dr Kelly noticed the star while monitoring a supernova he had discovered in 2014 while using Hubble to peer through a gravitational lens in the constellation Leo.

That supernova was split into four images by the lens, a massive galaxy cluster called MACS J1149+2223, located about 5 billion light-years from Earth.

Suspecting that Icarus might be more highly magnified than the supernova, Kelly and his team analysed the colours of the light coming from it and discovered it was a single star, a blue supergiant.

This star is much larger, more massive, hotter and possibly hundreds of thousands of times intrinsically brighter than our Sun, though still much too far away to see without the amplification of gravitational lensing.

By modelling the lens, they concluded that the tremendous apparent brightening of Icarus was probably caused by a unique effect of gravitational lensing.

Dr Kelly saw a second star in the Hubble image, which could either be a mirror image of Icarus, or a different star being gravitationally lensed.

Astronomy professor Alex Filippenko, from UC Berkeley, said: “For the first time ever we’re seeing an individual normal star – not a supernova, not a gamma-ray burst, but a single stable star – at a distance of nine billion light years.”

“There are alignments like this all over the place as background stars or stars in lensing galaxies move around, offering the possibility of studying very distant stars dating from the early universe, just as we have been using gravitational lensing to study distant galaxies.

“For this type of research, nature has provided us with a larger telescope than we can possibly build.”

As for Icarus, the astronomers predict that it will be magnified many times over the next decade as cluster stars move around, perhaps increasing its brightness as much as 10,000 times.

Published in the journal Nature Astronomy, the observations can provide a rare look at how stars evolve, especially the most luminous ones.