A primary school was in chaos today after the entire teaching staff QUIT. Sixteen teachers – including two heads and a number of staff with more than 20 years’ service – have left since the start of the year. Many teachers have previously been signed off for stress with the final seven members of staff […] 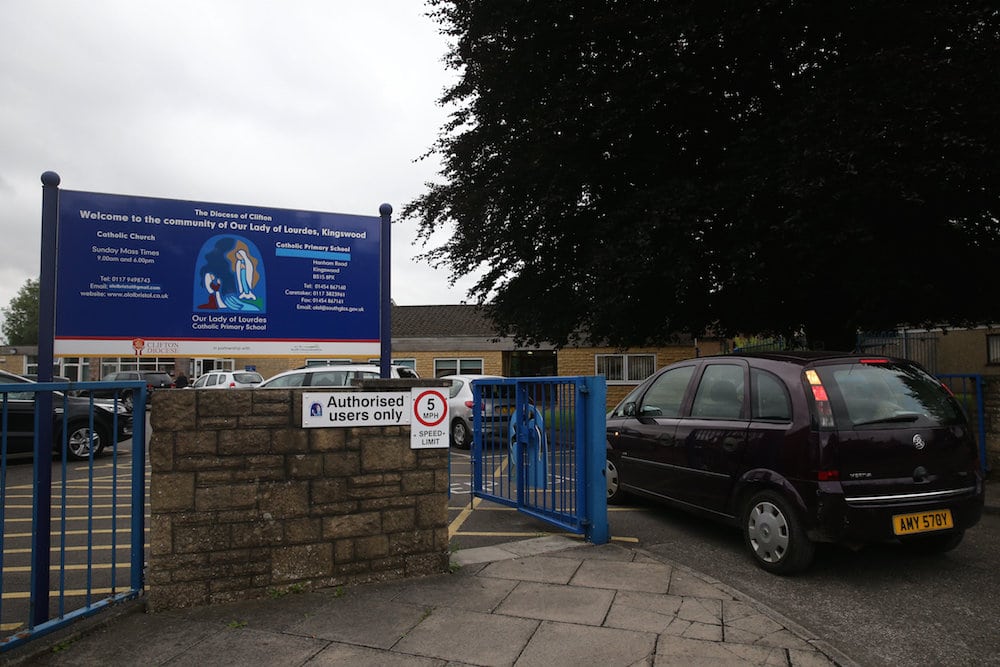 A primary school was in chaos today after the entire teaching staff QUIT.

Sixteen teachers – including two heads and a number of staff with more than 20 years’ service – have left since the start of the year.

Many teachers have previously been signed off for stress with the final seven members of staff leaving as the summer term ended today.

Union reps and insiders are blaming the leadership at Our Lady of Lourdes Catholic Primary School for the extraordinary walkout.

Parents were told by governors at the school in Kingswood, Bristol that an entirely new teaching staff would be in place from September.

Teachers at the school said they had to leave because it was “impossible” to work with the high workloads, and that they did not take the decision to leave lightly.

The school was rated Good by Ofsted in November 2013, but SATs results at the end of 2016 were below the floor standard set by the Department for Education.

Less than one quarter of pupils achieved the required standard for reading, writing and maths.

South Gloucestershire Council, which runs the school, told its leaders it needed to improve.

The then head teacher, Clare Murray, left the school shortly after the start of the 2016-17 academic year.

Executive headteacher Louisa Wilson, who is also head at nearby St Stephen’s CofE Junior School – where Maths SATs results were recently annulled – took over at the end of October 2016.

Deputy head teacher Teresa Harvey stepped up to take over as acting head.

Over November last year, several teachers were signed off with stress, with many saying they could not work with the new executive head.

It led to several complaints from parents worried for their children.

Chair of governors Lisa Paniccia-Brown wrote to parents to explain staff sickness was “out of our control”, with several letters going out in the run up to Christmas.

The first resignations started soon after, with supply teachers and temporary contracts drawn up to make sure the school remained staffed properly.

One teacher, who did not want to be named, said: “All of the teachers are leaving. We’ve had enough.

“Many of them were signed off with stress, and the pressure was unreasonable.

“We were told if we did not follow the head’s methods, we would not be welcome at the school.

“There have been a number of teachers here who have spent their entire teaching career at Our Lady, it’s become home to them.

“Leaving will cause them great emotional stress, because they share such a tight bond with the school, the children, the parents and the community.”

Another member of staff, who asked not to be named, added: “In November, many teachers were off with stress.

“They all went at different times, because it had become so difficult. The students are lovely, and the parents are so supportive.

“It’s so important for the school to have the same teachers – that continuity is what children need.”

Karla Wheeler, divisional secretary of the National Union of Teachers (NUT) in South Gloucestershire, said she had been working with the school since November but to no avail.

Ms Wheeler said: “We were forced to intervene. Five of our members were off with stress, and they said it was down to the new executive headteacher.

“It’s an impossible situation. Headteachers have a duty of care to their staff. We did a work survey, and it came back really negative.

“We’re worried for the children.”

She said the local authority had known about the issues, and she knew of a newly-qualified teacher (NQT) who is set to leave because of stress. The NQT had only been there six months prior.

A South Gloucestershire Council spokesperson said: “Our Lady of Lourdes has experienced a lot of change over the past year, but we are pleased that thanks to a lot of hard work, the school and its pupils are in a strong position for the future.”

He added outcomes for Key Stage 2 – SATs – were below the floor standard last year, and the provisional grades this year showed 77 per cent of children would meet the standard.

The spokesperson said: “The school is rightly proud of the pupils’ achievements and the teachers and other staff have all worked extremely hard to make these improvements.

“At the same time, there has also been a significant transition of staff during the school year, with some staff choosing to leave mid-year.

“As vacancies have arisen, staff have been recruited to temporary contracts in order to provide continuity for the children.

“It is not appropriate to discuss individual members of staff, but we note that among those departing are teachers taking up substantive and senior roles in other schools and we wish them well.

“A new team has been put together including a new headteacher, Nick Bracey, and this week the pupils met their new teachers for next year.

“The existing governing body remains in place to ensure continuity and stability during this time of transition.”