It comes after Jason Sudeikis wore their names to the premiere of Ted Lasso Season 2 in a show of support for the three Lions. 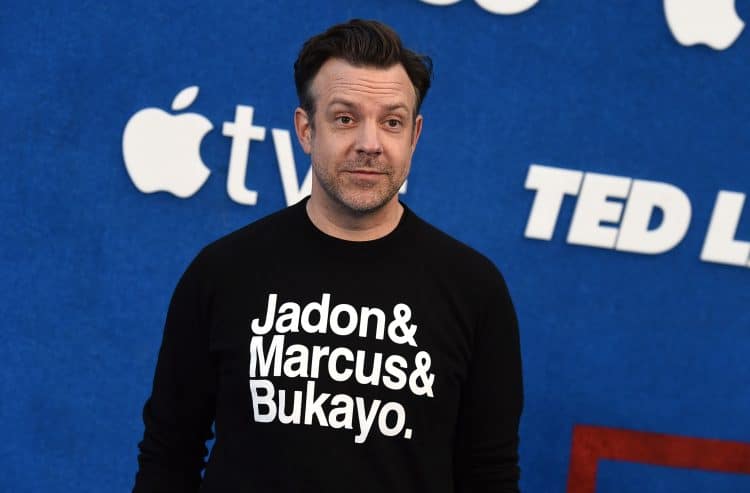 Sales of a t-shirt bearing the names of three England footballers have soared after American actor Jason Sudeikis sported the design at the premiere of  Ted Lasso Season 2.

Explaining the move on The Late Show With Stephen Colbert,Sudeikis said:

“Jadon, Marcus and Bukayo are three of the English footballers from their national team. They’re the last young fellas that took the penalty kicks.

“They didn’t turn out the way that certainly England would have hoped, certainly a lot of us here in the States would have too, and people worldwide.

“And they caught a lot of guff online, the three young black men. And our show is rooted in both, you know, despising things like bullying and racism … but it also is rooted and takes place in London in England.”

In a separate interview with British Vogue, he said: “I just felt it was necessary to use the platform of our big, fancy worldwide premiere to try and personify our show’s support of those three young men.

“Which is why I chose to put their three first names on the sweatshirt. The names their parents gave them.”

He said he had the idea the day before the premiere.

Sudeikis discussed his support for England during the European championship.

“The country has welcomed us and our production with open arms, hearts and minds,” he said.

“As well as bestowing us with so many of the kind, talented and hard-working people that work on the show.

“Plus, I f love that Phil Foden kid.”

He added: “Until the folks that run these companies step up and handle their effect on the world, they’re going to continue to infect the world with their apathy.”

To buy a version of the top CLICK HERE

Related: ‘Can’t we just do the right thing?’: Rashford hits out at The Spectator