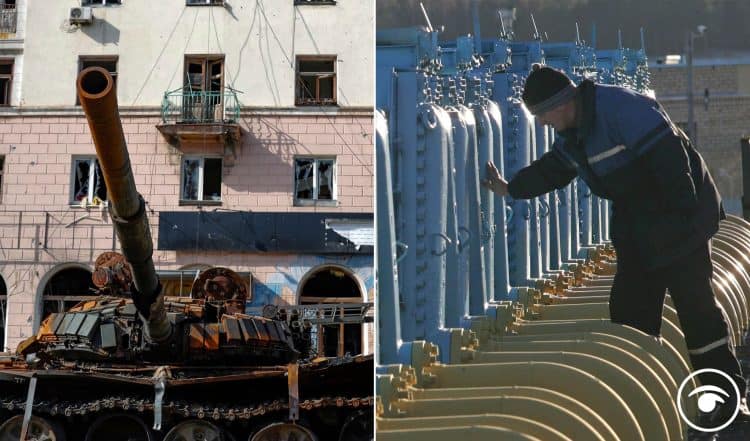 Russia has said it will shut off gas supplies to Poland and Bulgaria – two European Union nations that back Ukraine – in an escalation of a conflict that is increasingly becoming a wider battle with the West.

It comes as Maria Zakharova, the Russian foreign ministry spokeswoman, suggested that strikes could be authorized against NATO states who provide arms to Ukraine.

She warned: “Do we understand correctly that for the sake of disrupting the logistics of military supplies, Russia can strike military targets on the territory of those NATO countries that supply arms to the Kyiv regime?

“After all, this directly leads to deaths and bloodshed on Ukrainian territory.”

Could fighting spill over Ukraine’s borders?

US defence chief Lloyd Austin has urged Ukraine’s allies to “move at the speed of war” to get more weapons to Kyiv as Russian forces continued to bombard the country’s eastern and southern areas.

There are fears that the fighting could spill over Ukraine’s borders.

For the second day, explosions rocked the separatist region of Trans-Dniester in neighbouring Moldova, knocking out two powerful radio antennas.

He added that it would be ‘completely legitimate’ for British weapons to be used in such attacks, even though none are currently thought to be.

One day after the US and other Western allies vowed to speed up and improve military supplies to Ukraine, the Kremlin upped the ante, using its most essential export as leverage.

European gas prices shot up upon the news, which the EU Commission’s President Ursula von der Leyen called an attempt at “blackmail”.

This was a view echoed by Poland’s prime minister Mateusz Morawiecki, who told the parliament in Warsaw that the country would not be cowed by the gas cut-off.

He said Poland was safe thanks to years of efforts aimed at securing gas from other countries.

Ursula von der Leyen tweeted: “Gazprom’s announcement is another attempt by Russia to blackmail us with gas. We are prepared for this scenario. We are mapping out our coordinated EU response. Europeans can trust that we stand united and in solidarity with the Member States impacted.”