“I, Neil Oliver. here and now CHALLENGE Hurricane Eunice to a fist fight on the 2nd floor of the Dundasvale Car Park, Glasgow G4. FREEDOM WILL BE DEFENDED." 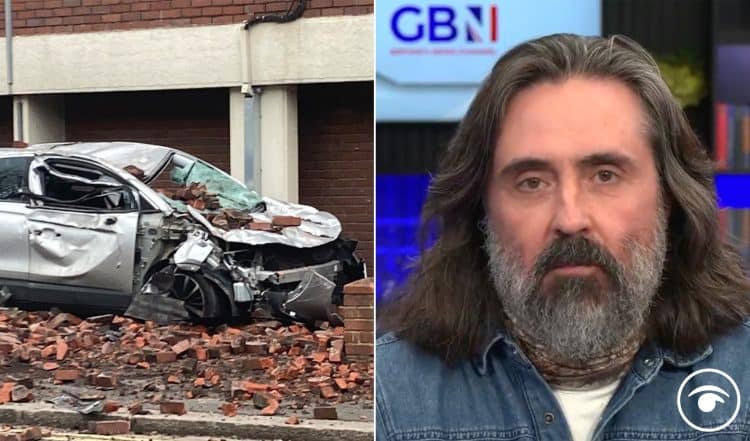 Strong winds of up to 70mph are set to sweep the UK in the coming days, disrupting travel, power supplies and Storm Eunice recovery efforts, forecasters have warned

The Met Office has issued yellow warnings for wind covering most of the UK on Sunday and Monday, after northern England faced blizzard-like conditions on Saturday afternoon.

Meanwhile, thousands of homes are still without power after Eunice hit parts of the UK on Friday, and insurers said clean-up costs could rise above £300 million.

At the height of the storm, the roof of the O2 Arena in London was damaged – causing rapper Dave’s upcoming concerts to be postponed – and the spire of St Thomas Church in Wells, Somerset, crashed to the ground.

At least four people were killed amid the fierce winds on Friday, including an Irish council worker who died after being hit by a falling tree. He has been named locally as Billy Kinsella.

The father-of-one was clearing debris from a road close to his home in Co Wexford when he was hit as a tree came down during Storm Eunice.

Tributes have been paid to the 59-year-old, from Clonroe in Gorey.

But ignoring the obvious threat to life, Neil Oliver of GB News fame, took to Twitter, and brought a storm into the culture war.

He tweeted: “I see the weather is the latest thing we’re being advised to give in to without so much as a sigh.”

Well one person who supported him was George Galloway: “We’re out and about Eunice. Because we live in Britain. Because we have children to take to school, business to attend to, work to do. And because our parents faced the Blitz.”

Let’s leave aside the fact that during the Blitz people hid from the bombs and didn’t walk about. If Galloway is in your corner, worry…

Anyway most people didn’t think much of his comments…

Related: Oh the shade! This Morning’s response to Eamonn Holmes over claims about his exit to GB News