Lis Scott corrected the letter so it better reflects the Queen's English it claims to espouse. 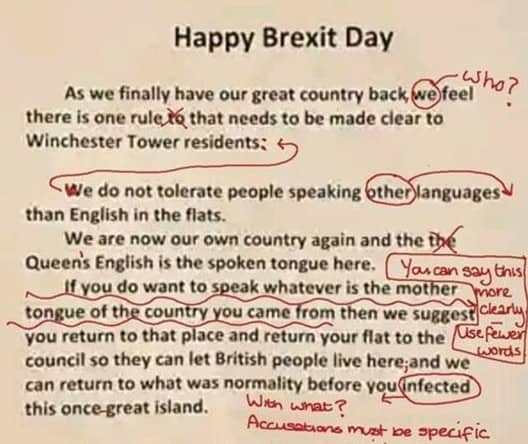 A punctuation ‘ninja’ has hilariously edited a xenophobic letter pinned on doors of a tower block in Norwich on Friday.

Signs carrying the title “Happy Brexit Day” were found stuck on fire doors across all floors of Winchester Tower on Brexit Day, just hours before Britain officially left the EU.

“We are now our own country again and the the Queens (sic) English is the spoken tongue here”, it read.

But one literary fiend has hilariously corrected the letter so it better reflects the Queen’s English it claims to espouse.

Lis Scott left the note littered with red marks in a bid to point out the numerous mistakes, adding commas, colons and semi colons.

She also sought to clarify several of the points, such as who they refer to when they say “we” and what they truly mean by “evolve”.

Read the edits in full below:

Related: Pound plummets as Johnson clashes with EU over what he signed before Brexit negotiations even begin