"We have people living here with children, health problems and disabilities." 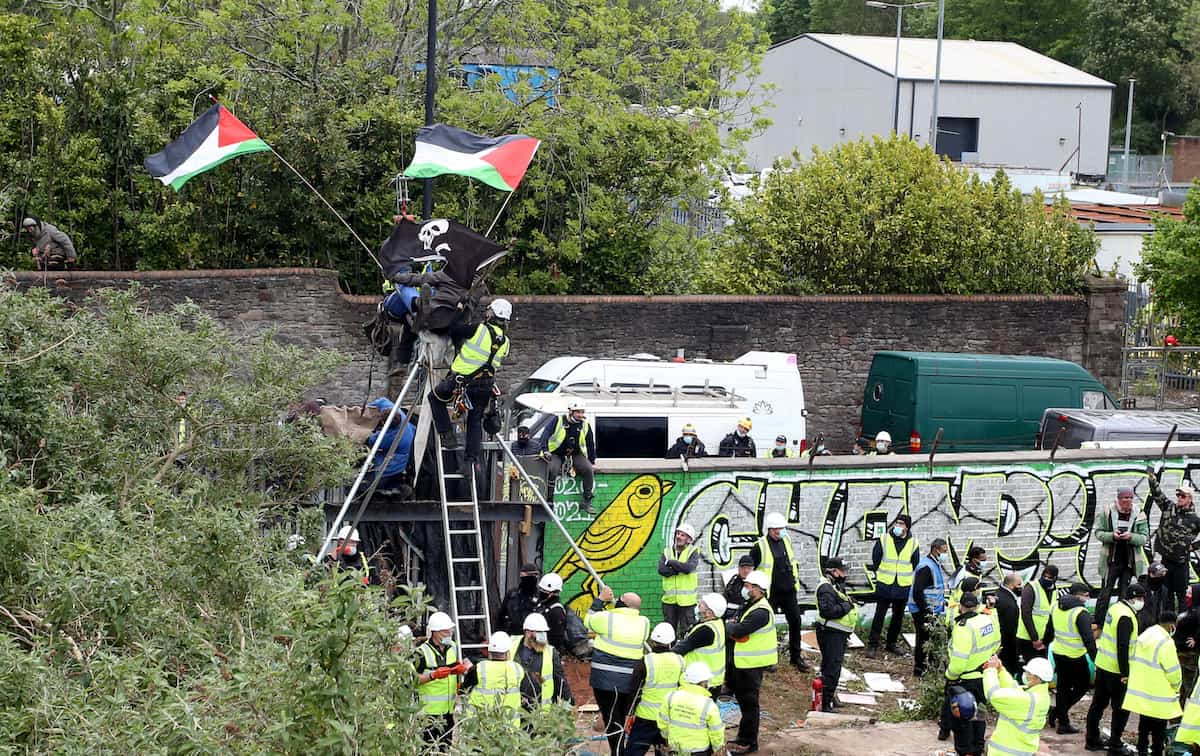 Police are currently evicting 75 travellers from an encampment today.

A heavy police presence has been seen surrounding the entrance to a camp in Bristol and closed the road as the site is evicted.

About 75 travellers, including children, have been living on land formerly used as a gasworks in Eastville.

The road has been closed this morning (May 20) with police officers guarding a barrier, and several police vans and cars are also blocking access.

Landowner Wales & West Utilities say the group, understood to have moved in a few weeks ago, are “illegally occupying” the site.

Tensions rise between police and protesters as travellers camp is evicted pic.twitter.com/Z1bXRir7ic

They were issued with a 24-hour eviction notice at 12pm on May 18 but had requested more time to make alternative arrangements.

Travellers resisted eviction from the same site last June 13, and the utilities company has encouraged this group to “leave peacefully”.

A member of Bristol Housing Action Movement, a support network close to the travellers, said: “It’s kind of an industrial wasteland, with lots of bushes and trees. It’s going back to nature.” reports the Bristol Live.

They continued: “The eviction order from Wales and West gave 24 hours’ notice from 12pm on Tuesday. We can’t predict when they’ll turn up, but we’re expecting an eviction some time in the following week.”

In a statement, the travellers said it was agreed in court on May 6 that “we would be contacted to negotiate our departure”.

“Police came to visit us after this, and expressed their concern about an eviction taking place in the way that it did last summer,” the statement continued.

“We asked if we could speak with the landlord to arrange more time to coordinate a safe, amicable departure taking into account the welfare of all parties. We have been waiting for this dialogue patiently in the meantime, but have had no further communication.

“At around midday on May 18, two bailiffs accompanied by police liaison officers met with site representatives at the gate and explained that they would be returning 24 hours later on May 19 with the aim of evicting all those still present.

Dav, 41, was craned from the camp. He says some of the bailiffs’ actions have been “quite violent” pic.twitter.com/QOgZ3N1JpE

“Representatives for the residents asked for a compromise requesting more time to ensure that vehicles on site can be moved safely in a timely organised manner. We do not want to be left with no choice but to resist the eviction.”

The travellers added that many in their group do not currently know where they could move if forced out of the old gasworks.

“We have people living here with children, health problems and disabilities,” they said. “We also have people who are working or taking children to nursery tomorrow.

“We as group are simply looking for a safe, sensibly located area in which to live without harming other local residents or negatively impacting on the environment. This also ensures that we don’t put more undue pressure on the city’s already overstretched road network.

“Those who can leave and have places to go will do as soon as possible. Some already have. More time for negotiation and safe departure is needed. A request for open dialogue with all relevant stakeholders has been sought.”

Richard Williams, Wales & West estates surveyor said the firm is aware of “a number of individuals illegally occupying our land” in Glenfrome Road.

“The land is where we plan to build a new depot – essential to keep the gas flowing safely to heat and power local homes and businesses,” he added. “We have received planning permission, and construction is scheduled to start this month.

“All individuals currently trespassing have been instructed to leave the area by court order received on May 6. Since then, everyone living on the site has had the opportunity to make alternative arrangements and leave.

“We would urge them to do so peacefully so work can begin on site to build essential infrastructure to support communities right across Bristol. We will work alongside the appropriate authorities until this matter is resolved.”