Hope Hicks, once a close aide and communications director for President Donald Trump, becomes on Wednesday the first member of his inner circle to testify to the congressional panel leading a probe into possible obstruction of justice by Trump, reports Reuters in Washington. Democrats who control the House of Representatives Judiciary Committee believe Hicks can […] 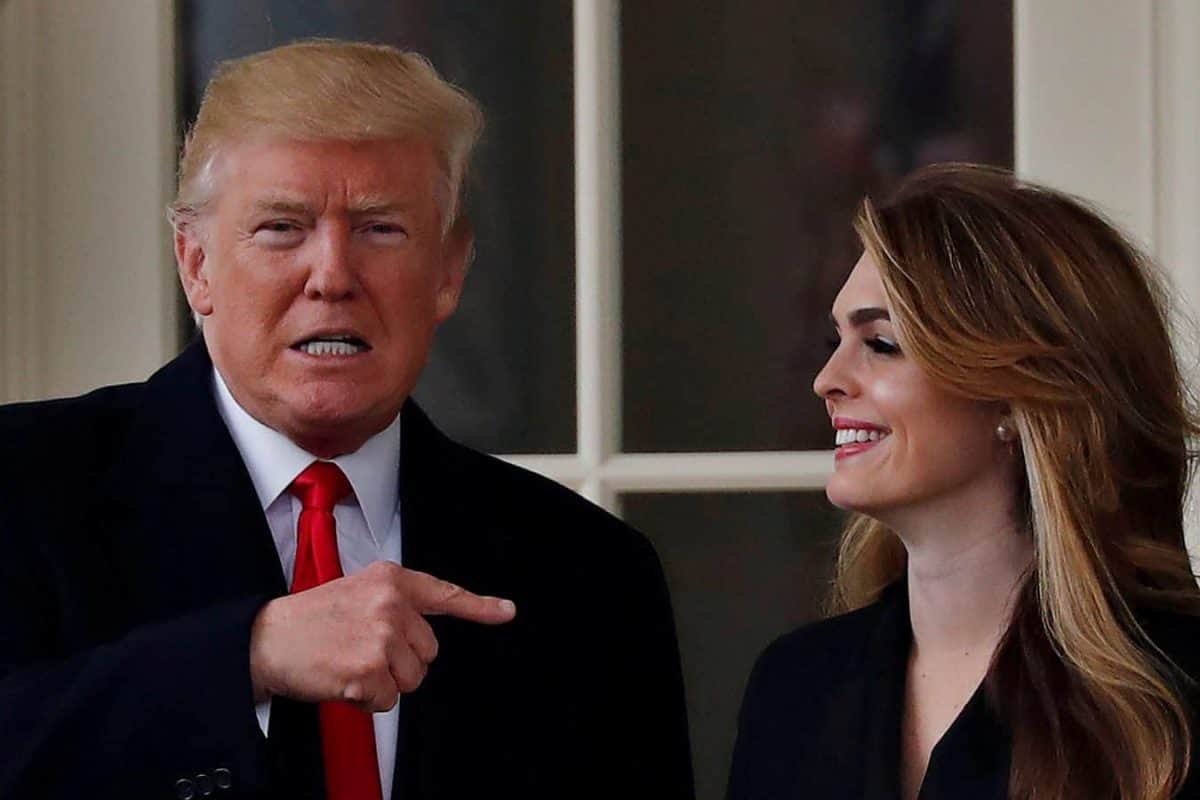 FILE PHOTO: U.S. President Donald Trump reacts as he stands next to former White House Communications Director Hope Hicks outside of the Oval Office as he departs the White House for a trip to Cleveland, Ohio, in Washington D.C., U.S., March 29, 2018. REUTERS/Carlos Barria/File Photo

Hope Hicks, once a close aide and communications director for President Donald Trump, becomes on Wednesday the first member of his inner circle to testify to the congressional panel leading a probe into possible obstruction of justice by Trump, reports Reuters in Washington.

Democrats who control the House of Representatives Judiciary Committee believe Hicks can provide important insights into troubling chapters of former Special Counsel Robert Mueller’s report on Russian meddling in the 2016 presidential election, and Trump’s efforts to interfere with the investigation.

Mueller’s 448-page report refers to Hicks more than 180 times and places her in the middle of some of the most incriminating episodes involving Trump, who did not agree to answer Mueller’s questions on obstruction.

Democrats want Hicks to shed light on a June 9, 2016, meeting at Trump Tower in New York, where the Mueller report said campaign officials, including the president’s son Donald Trump Jr., met with Russians who had offered “dirt” on Democratic presidential candidate Hillary Clinton.

One question is whether Trump himself was aware of the meeting at the time.

The Mueller report quotes former deputy campaign chairman Rick Gates as saying Trump Jr. told Hicks, other campaign staff and Trump family members about his plans for the meeting but that Hicks denied knowing about the meeting until months later.

The report also recounts how in July 2017, Trump directed Hicks to issue a misleading statement to the press saying only that the Trump Tower meeting had been about Russian adoption.

“I would like to know about her involvement in that process and what she personally knew happened,” said Ted Lieu, a Democrat representative on the Judiciary Committee. “She was involved in that whole chain of events, where the president lied about what actually happened.”

Mueller’s report concluded there was insufficient evidence to establish that the Trump campaign engaged in a criminal conspiracy with Moscow. It also described attempts by Trump to impede Mueller’s probe, but stopped short of declaring that he committed a crime.

“She’s our first fact witness,” said Jamie Raskin, a Democratic lawmaker on the committee. “Having somebody talking about what happened from a personal perspective will be a dramatic debut for the committee.”

Hicks, who was one of Trump’s closest aides during the 2016 campaign and the first 14 months of his presidency, was subpoenaed to testify and is due to appear at 9 a.m. (1300 GMT) on Wednesday, the committee said.

It will be a closed-door interview with lawmakers, and the committee will release a transcript afterward.

The White House is trying to prevent former Trump aides from cooperating with a string of congressional investigations into Trump, so it is unclear how helpful the 30-year-old public relations consultant will be.

Hicks’ attorney did not respond to a Reuters request for comment.

What is Hope Hicks likely to testify about Donald Trump?

Hicks was also present for two separate episodes that Mueller cited as offering relevant evidence of obstruction after Trump took office: his efforts to get former Attorney General Jeff Sessions to redirect the Russia probe away from his 2016 election campaign team, and his attempts to persuade former White House Counsel Don McGahn to deny that Trump asked him to remove Mueller.

Lawmakers are not sure whether Hicks will talk about her time in Trump’s administration. The White House has already directed her not to give the committee documents pertaining to her tenure there, which ended in March 2018. Last month, the White House directed McGahn to ignore a subpoena for documents and testimony, leading him to skip a committee hearing.

“It just seems like the Democrats are trying to influence the 2020 election and using the committees to do so,” said Debbie Lesko, a Republican on the panel.

That could force the committee to seek a federal court order directing her to testify, an action the full House authorized in a party-line vote last week.

The committee has also subpoenaed Annie Donaldson, McGahn’s former chief of staff, to testify on June 24. Donaldson did not respond to a Reuters query.

It is no wonder Democratic investigators in the U.S. Congress want to talk to Hope Hicks, a former close aide to President Donald Trump: She is mentioned in the Mueller report more than 180 times.

On Wednesday, Hicks is slated to speak behind closed doors with the House of Representatives Judiciary Committee. The Democratic-led panel is looking into former Special Counsel Robert Mueller’s report on Russian meddling to assist Trump in the 2016 U.S. presidential campaign, and Trump’s attempts to impede Mueller’s probe.

Hicks, a public relations consultant and former model, was privy to pivotal moments in Trump’s campaign and in the early months of his presidency, including accounts of possible obstruction by Trump that Democrats are keen to investigate.

Here are some of the Mueller report’s references to Hicks:

About a year later, when senior administration officials became aware of emails about the meeting, Mueller said Trump directed Hicks and others on at least three occasions not to publicly disclose information about the discussion, including the emails that Hicks described as “really bad.”

Instead, Trump dictated a press statement to Hicks that said the Trump Tower meeting was about regulations on Americans adopting Russian children.

Mueller concluded that Trump’s acts were not obstructive, because they involved only disclosures to the press. But legal experts say Hicks could help lawmakers determine whether the president was aware of the Trump Tower meeting at the time.

Mueller says Trump told investigators in writing that he had no recollection of learning about the meeting or emails before the 2016 election.

The report also says, however, that a few days before the Trump Tower gathering, Trump Jr. announced at a regular morning meeting of campaign staff and Trump family members, attended by Hicks, that he had “a lead on negative information” about Clinton and planned to meet with the Russians.

Mueller described unsuccessful efforts by Trump to persuade White House Counsel Don McGahn to have Mueller removed as special counsel in June 2017. When news of the episode broke in January 2018, one of Trump’s personal attorneys called McGahn’s attorney and said the president wanted McGahn to issue a statement denying that he had been asked to fire the special counsel. McGahn’s attorney spoke with McGahn about that request and then called the president’s personal counsel to relay that McGahn would not make a statement.

Hicks told Mueller that she recalled relaying to the president that one of his attorneys had spoken to McGahn’s attorney about the issue. She also recalled that the president asked White House spokeswoman Sarah Sanders to contact McGahn about the story.

The Mueller report shows that Hicks was also aware of Trump’s unsuccessful efforts to persuade former Attorney General Jeff Sessions to reverse his recusal from overseeing the Russia investigation and to redirect the probe away from the 2016 campaign.

On June 19, 2017, two days after Trump had directed McGahn to have Mueller removed, the report says the president met with his former campaign manager, Corey Lewandowski, and asked him to deliver a message to Sessions that Trump then dictated. The message directed Sessions to make a public statement saying there should not be a special counsel investigation of the Trump campaign and to limit the Russia probe to future elections.

Trump followed up on the message a month later, only days after emails and information about the June 2016 Trump Tower meeting with Russians had been disclosed.

Lewandowski told Mueller that he asked Hicks to type up his handwritten notes of Trump’s dictation and tried unsuccessfully to persuade a White House staffer to deliver the message to Sessions.

Lewandowski later told Hicks about Trump’s request and joked with her about a suggestion by the president that Lewandowski – a private citizen – should tell Sessions that he was fired if the attorney general would not meet with the former campaign manager.

Hicks also told investigators that Trump viewed Sessions’ recusal from the Russia investigation as an act of disloyalty, according to the Mueller report.

She recounted a meeting between Trump and Sessions, during which the attorney general agreed to resign, saying she had seen the president that upset only once before, when the “Access Hollywood” tape of Trump talking about grabbing women’s genitals surfaced during the 2016 campaign.