Meet the chatty parrot who had very strong views when he spotted the US president landing in the UK – and squawked “Trump’s a wanker” at the TV. Marie Mcaleavey, 51, adopted African grey parrot Lucky Angel two years ago, and he only knew a few names and phrases. But he has been repeating “Trump’s […] 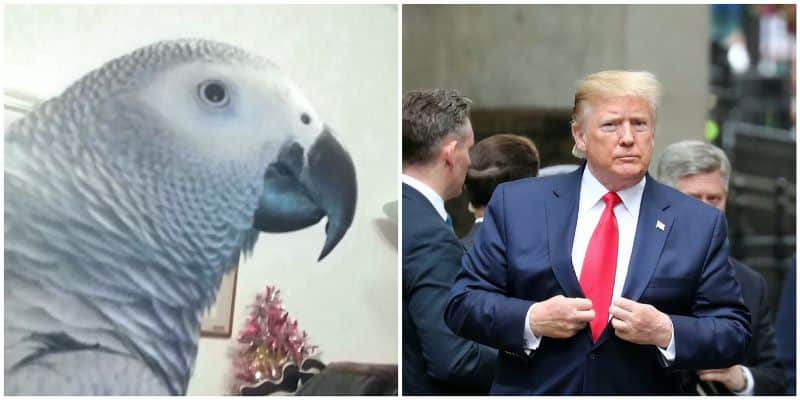 Meet the chatty parrot who had very strong views when he spotted the US president landing in the UK – and squawked “Trump’s a wanker” at the TV.

Marie Mcaleavey, 51, adopted African grey parrot Lucky Angel two years ago, and he only knew a few names and phrases.

But he has been repeating “Trump’s a wanker” since he saw the president getting off the plane after landing in the UK on Monday.

The political parrot also has strong views on Brexit – regularly shouting ‘No Brexit’ and ‘May Out’ – since last year.

Carer Marie, from Newry, County Down, Northern Ireland, said she thinks Lucky Angel is picking up his anti-Trump phrases after listening to her speaking to relatives in America.

He also loves watching the news, and often sits on Marie’s shoulder when she’s watching TV.

Single Marie said: “I think it’s because he has been hearing his name on TV so much. He’s seen him on TV and he knows who he is.

“I think when he saw him coming off the plane. He knew that was the same guy. He was shouting ‘Trump’s a wanker, Trump’s a wanker’ and then ‘Trump get lost’.

“He must know he is still about because yesterday, he kept bringing Trump up.”

Marie adopted Lucky Angel when she spotted him for sale on Gumtree after his former owner passed away.

She added: “He wasn’t too chatty. He would say the man’s name who he used to be with, but that was about it.”

He soon learned to count to count to seven, and Marie said he came out of his shell when he fell in love with her favourite Abba songs.

They bonded over a shared love of Dancing Queen, and his first political outburst took Marie by surprise, in around October last year.

“All this Brexit stuff was on TV and I think he was taking it in,” she said.

“I would be saying to my friends or on the phone ‘Oh this Brexit is going to ruin the country’ or ‘I don’t think May knows what he’s doing’.

“I guess he was taking it all in, because he came out with ‘No Brexit’ and ‘May Out’.

“I couldn’t believe it. I was in shock, but he keeps saying it. We laughed – and when you laugh he loves it, so he knows he was on to a good idea so kept doing it.

“He’s very intelligent. He picks thing up so quickly.”

He started moved on to criticising Trump in November after he heard her talking to a relative in America, via Whatsapp, about the US president.

“She doesn’t like Trump and she was saying he was irresponsible in the way he was running the country,” she said.

“She was talking about everything he was up to and I must have said something like ‘God he must be a wanker that Trump’.

“He sits on my shoulder when I’m on the phone and he just came out with it – ‘Trump’s a wanker’.

“I knew he was quick at picking stuff up.”

She said during the recent visit by Trump, the parrot has been squawking loudly – or shouting his insults – when he sees him on TV.

Asked whether she shared her parrot’s political views, she said: “Well, I will talk about how people should go out and vote, and how we need another referendum but he hasn’t picked that up.”