Watch as the Commons Standards Committee is reduced to tears of laughter over claims Patel had an executive responsibility to watch the film! 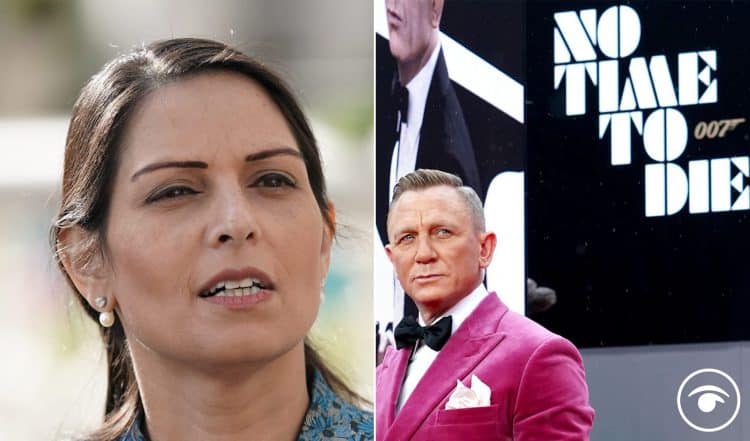 What have Priti Patel and James Bond got in common? Well, according to one Tory minister, quite a lot.

Appearing in front of a select committee hearing, Mark Harper moved to defend the home secretary after it was revealed she attended the premiere of No Time To Die on 28th September 2021 compliments of the Jamaican Tourist Board.

As committee chair Chris Bryant pointed out, she declared the event not through the House of Commons but through her department.

Explaining why the event would have been attended in a ministerial capacity, Harper said: “I think it’s fairly obvious then she was invited as the home secretary.”

“It’s entirely right she — I suspect and I would suggest — was invited as the home secretary.”

Cabinet Office minister Michael Ellis then jumped into the conversation and said: “Well, the nature of the film, one could argue, is connected to executive functions.”

Which provoked laughter in the room.

Mr Harper then added: “The fact we know about that is because it was logged, registered and is now in the public domain. That demonstrates the system works.”

Mr Bryant also added that Liz Truss, the foreign secretary, was also invited via producers Eon, and asked again: “In what sense is that at all in their ministerial capacity?

Mr Harper replied: “Well I think they were clearly invited as the foreign secretary and the home secretary, not as constituency MPs. That was why they were invited.

Mr Bryant said: “What because Bond travels abroad, and she’s in charge of MI6?”