"If I were to design a massive experiment to create a more dangerous virus, one that is capable of blasting through our vaccines, I would do what the UK is proposing to do." 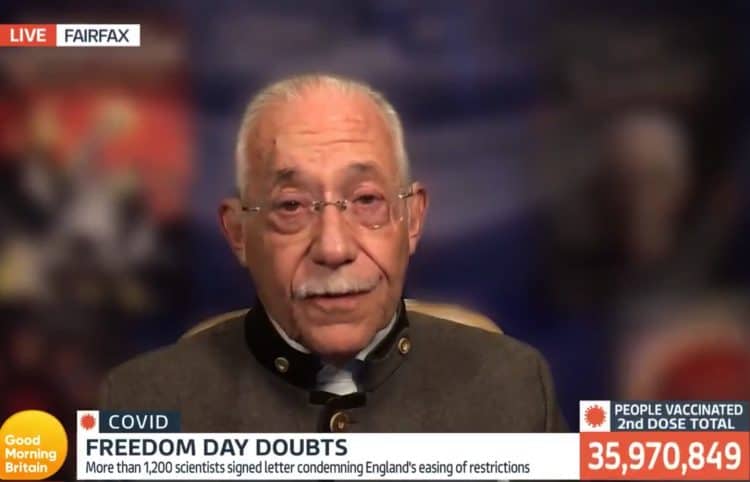 Vaccines minister Nadhim Zahawi was forced to wriggle out of some uncomfortable questions this morning as Britain prepares to open up its economy in the midst of a surge in Covid-19 cases.

Social-distancing rules which, in one form or another, have governed people’s lives for over a year finally ended on Monday morning at one minute past midnight.

Face masks are no longer mandatory in shops and on public transport, limits on gathering have gone and the work from home guidance has ended.

Nightclubs, theatres and restaurants can fully reopen, while pubs are no longer restricted to table service only.

But the so-called ‘freedom day’ unlocking has been met with nerves and trepidation among the scientific community.

At an emergency summit, scientists and physicians warned that Britain’s position as a global transport hub would mean any new variant will spread rapidly around the world, as they expressed concern about Downing Street’s plans.

Government advisers in New Zealand, Italy and Israel were among those raising the alarm about so-called Freedom Day – while more than 1,200 scientists backed a letter to the Lancet journal warning that Johnson’s strategy paved the way for the emergence of new variants.

An adviser to New Zealand’s government to the summit he and his colleagues were shocked at England’s approach.

“In New Zealand we have always looked to the UK for leadership when it comes to scientific expertise, which is why it’s so remarkable that it is not following even basic public health principles,” Michael Baker, a professor of public health at the University of Otago and a member of the New Zealand ministry of health’s Covid-19 technical advisory group, said.

The US Covid expert said: “If I were to design a massive experiment to create a more dangerous virus, one that is capable of blasting through our vaccines, I would do what the UK” (England) “is proposing to do”.

'If I were to design a massive experiment to create a more dangerous virus, one that is capable of blasting through our vaccine, I would do what the UK is proposing to do.'

Boris Johnson’s plan to end restrictions is a danger to the rest of the world, health experts have said. pic.twitter.com/EjpFMDuQJ3

The Minister tells @susannareid100 border restrictions are remaining and 'guidelines are clear'.

The guidelines are not legally binding regulations. pic.twitter.com/342X3kybCA

Related: ‘Pack your bongo and get out’: Australia orders deportation of Katie Hopkins