From Boris "the liberal" to disrespecting the Queen, here's a run down of the most bizarre things Donald Trump told Nigel Farage. 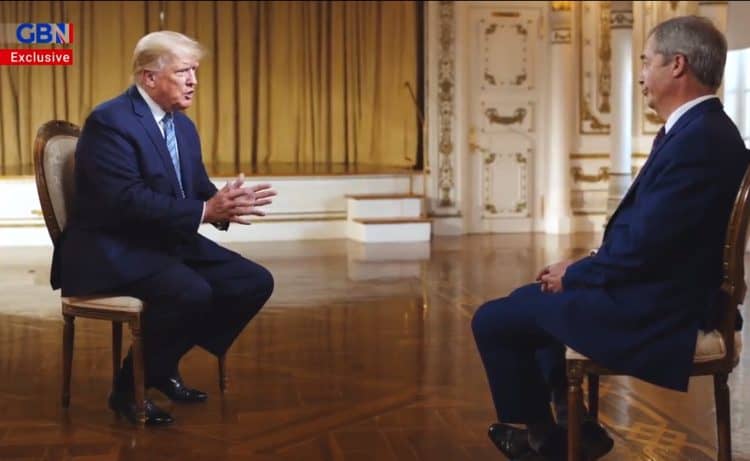 Donald Trump is predicting a “very big” year in 2022 and “an even bigger” 2024 as he said he will be back out on the campaign trail in the US.

The former US president, 75, said he is getting “the biggest crowds” he has ever had at rallies, but did not explicitly say whether or not he would run for election in 2024.

In a wide-ranging interview with former Brexit Party leader Nigel Farage on GB News, Trump said he loves America and brought it to “a level it’s never seen before” during his presidency.

Asked by Farage why he would want to go back into the “hell” of politics, Trump said it would be for the love of his country and “helping people”.

But it wasn’t all plain sailing for the Republican.

Farage showed some bottle and touched, a bit, on the numerous scandals that rocked Trump’s administration.

They shared some common ground on the border issues that are, according to the pair, the “number one” political issue at the moment.

And both equally had a distaste for Meghan Markle, who today defeated the Mail on Sunday in court.

“I think Harry has been used horribly. I think one day he will regret it,” Trump said.

“You know people say I’m very good at the prediction business and I think he will regret it. He probably does already but I’m not a fan of hers.

“I never got it. I see her, I listen to her she’s trying to do things that I think are inappropriate. I think Harry has been used horribly, it has ruined his reputation with his family and it’s really, really – I think it has hurt the Queen.”

A “little on the liberal side”

Boris Johnson got a mention, with Trump saying he has gone “a little on the liberal side of late”, which is news to us.

And for those who are keeping a record, wind power is something that he still hates, really hates.

“I think it’s a shame. In Aberdeen, they built this ugly windfarm in the ocean. It’s so disgusting to look at.

“I built one of the most beautiful golf courses in the world and now you look, these things are 20, 30 stories tall, they are monsters, they are far out but they are right on top of you. I think Ireland has been tougher about it.

“Wind is the most expensive form of energy and they kill all the birds and every 10 years you have to replace them but they just let them rot. Boris is wrong. If he’s going heavy into wind, he’s making a big mistake.”

“I think wind is ridiculous. I think wind is a horrible thing for Scotland because I own great properties in Scotland and Ireland and I look at these great fields with these horrible windmills. I guess windmills is a nice term – turbines – because they are starting to rust.

“Once they are there for a few years they start to rust and wear out and look terrible. In the UK, they are all over the place. I think ‘what a shame they’ve done.’ You know environmentalists like this stuff – I think they hate the world.”

He also had a pop at Antifa (naturally).

“Then you have Antifa. Very bad. They had Antifa in that rally. They had a lot of people leading others on January 6th. It’s pretty incredible that nothing happened to them but the other – this has been going on for many years.

“They are about politics but their original founding message was ‘kill the police’. When that becomes mainstream – not good.”

Trump still thinks he won the election, and moved to distance himself from the storming of Congress.

“We had a great election. It was a rigged election. We got more votes than any sitting president“, he said.

And leaving Afghanistan, an idea he originally supported, is now the worst idea ever…

“The withdrawal from Afghanistan I think was the most embarrassing moment in the history of our country.“