He gave a similarly rousing speech on Wednesday in Glasgow as he declared, 'We refuse to be meek... we're not having it anymore'. 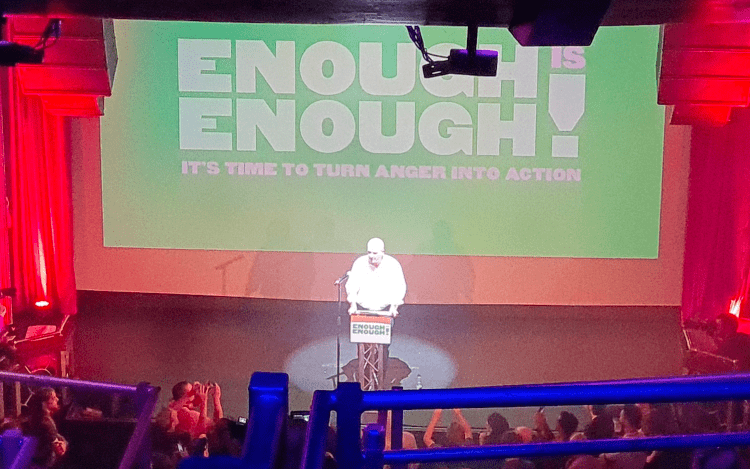 Mick Lynch was met with cheers and rapturous applause following his speech at last night’s ‘Enough Is Enough’ rally in Clapham Grand, London.

As you can see in the clip below, Lynch declared that “the working class is back and we refuse to be poor anymore”.

The Secretary-General of the Rail, Maritime and Transport Workers Union (RMT) was one of four speakers at the launch event for the campaign on Wednesday, August 17, including right-hand man Eddie Dempsey, MP for Coventry South, Zarah Sultana, as well as author and political columnist, Michael Rosen.

Citing other witnesses on Twitter, the RMT figurehead and current emblem helping drive forward the present trade union momentum is also said to have the Conservatives “assumed that our members and all workers wouldn’t fight for our rights, but they were wrong”

At what point, his speech was put on pause as a whipped up crowd chanted “RMT!” for several seconds.

Speaking on the current Tory leadership race as well, he remarked that the options of Liz Truss and Chancellor Rishi Sunak are both “short straws for the working class”.

Admitting that the Enough Is Enough campaign “never started off as a political movement“, he also stated that he believes that the mood of the country has now made it one.

He drew his speech to a close by urging “every union, community organisation, every grassroots organisations — whatever it is — to fight back against this austerity”, adding that since this current administration “act in their class interests, it’s time to act in our class interests”.

This wasn’t his only address to fellow trade union members and those expressing their dismay with those currently overseeing a national cost of living crisis, as Lynch also closed a public meeting in Glasgow on Tuesday evening in front of a packed out crowd.

Echoing similar sentiments as those delivered in London, he was also met with a standing ovation and thunderous applause, declaring: “We refuse to be meek… victory to the workers.”

Related: As Post Office and BT workers to strike it’s worth watching this Mick Lynch and Eddie Dempsey interview