Fancy camping out in searing 38 degree heat? That's where we're headed, according to meteorologists. 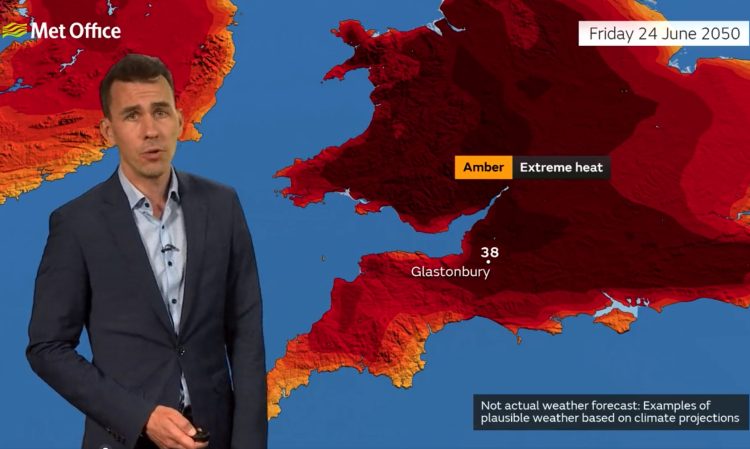 The Met Office has given a chilling warning over what temperatures could look like in the near future if action isn’t taken to reduce Greenhouse Gas emissions.

Meteorologist Aidan McGivern has predicted that festival-goers could be basking in baking heat over the course of the weekend within the next 30 years.

Temperatures as high as 38 degrees could become commonplace in the UK during the summer months, making for some pretty uncomfortable camping conditions.

The forecast comes as climate scientists warned that every heatwave being experienced today has been made more intense and more likely to happen because of climate change.

A review of extreme weather hazards shows that for some, such as heatwaves, it is “unequivocal” they are worsening because of global warming, and the impact in terms of lives lost and financial costs are being underestimated.

For others, such as tropical cyclones, there are variations between regions and the role that climate change plays in each event.

But severe droughts in many parts of the world are not due to climate change, the review by scientists from University of Oxford, Imperial College London and the Victoria University of Wellington, New Zealand, said.

Extreme weather events linked to climate change have caused a large number of deaths and cost billions of pounds in damage in recent decades, the study published in the journal Environmental Research: Climate said.

The review looked at information from the latest reports from the UN’s Intergovernmental Panel on Climate Change (IPCC) and results from the growing body of attribution studies which use weather observations and climate models to identify the role of global warming in specific events.

It focused on changes to five hazards – heatwaves, rainfall-based flooding, tropical cyclones, wildfires and droughts – and the impacts of recent specific events, in what the researchers said was the starting point for an inventory on the effects and costs of climate change.

“We can very confidently say that every heatwave that is occurring today is made more intense and more likely because of climate change.

“There are local factors like land use changes that might change how much more likely, but there’s no doubt climate change is really an absolute gamechanger when it comes to heatwaves”, around the world, she said.